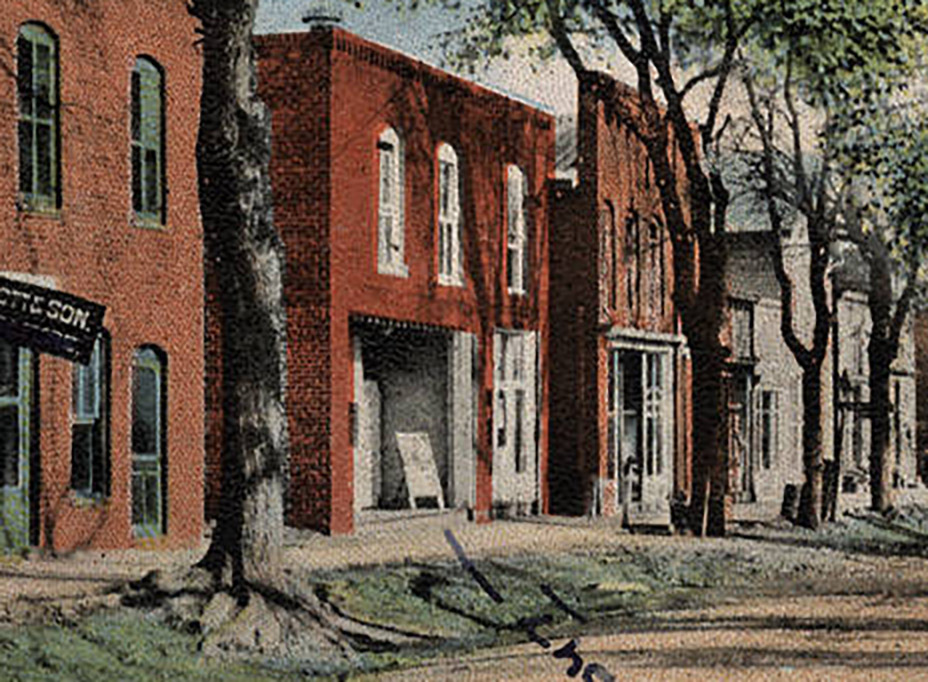 As Steve Rankin wryly pointed out, the predecessor (J. C. Scott) to this building housed a truly unfortunate concomitant combination of businesses. 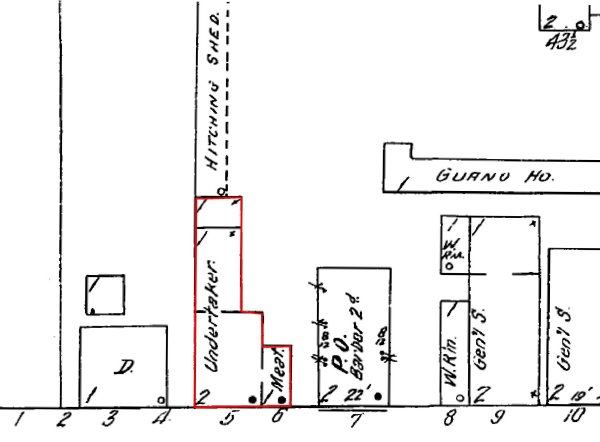 Yes folks, that's undertaker and meat market - with an interior communcation (the gap in the common wall)

Hopefully the synergies were not what they hoped; by 1924 the brick building pictured above had been constructed, and it was a movie theater. In the postcard above, you can see the sandwich board in the front entrance, and someone wrote on the card "Theater" with a line pointing to the building. At some point, it became the Osbunn theater.

Gee Coleman, writing in the News of Orange in 2011 wrote that the theater was named for Oswin and Bunn Forrest - two brothers who were business partners in the early operation. He goes on:

During the Great Depression when so many mills shut down and his roller business was way down, [W.M. Chance] leased the closed theater in west Hillsboro from the owner, Scott Cates. It was the Hollywood Theater, and he began operations there about 1936.

Later, Mr. Chance bought the Osbunn Theatre on King Street in downtown Hillsboro from Ormond Crabtree, who was moving his family to Florida to go into the citrus grove business. Mr. Chance then closed the Roller Shop and concentrated on the movie business.

As was the case most of the time in those days when a man operated a small business, his family joined in and helped out in any way they could. I remember Mrs. Chance worked in the ticket booth of the Osbunn for many years, and I am sure that the rest of his large family worked there or at the Hollywood Theater at some time.

They included: Bill, who married Wynne Cole; Christine, who married H.S. (Shine) Baucom; Marie, who married William Cates; Fred, who married Ora Mincey; Grace, who married Jack Liedl and moved to Fairfax, Va.; Violet, who married Earl Bason; and Donald (Pee-Wee), who was the mascot of the Hillsboro High School Class of 1936 and now lives in western Colorado. 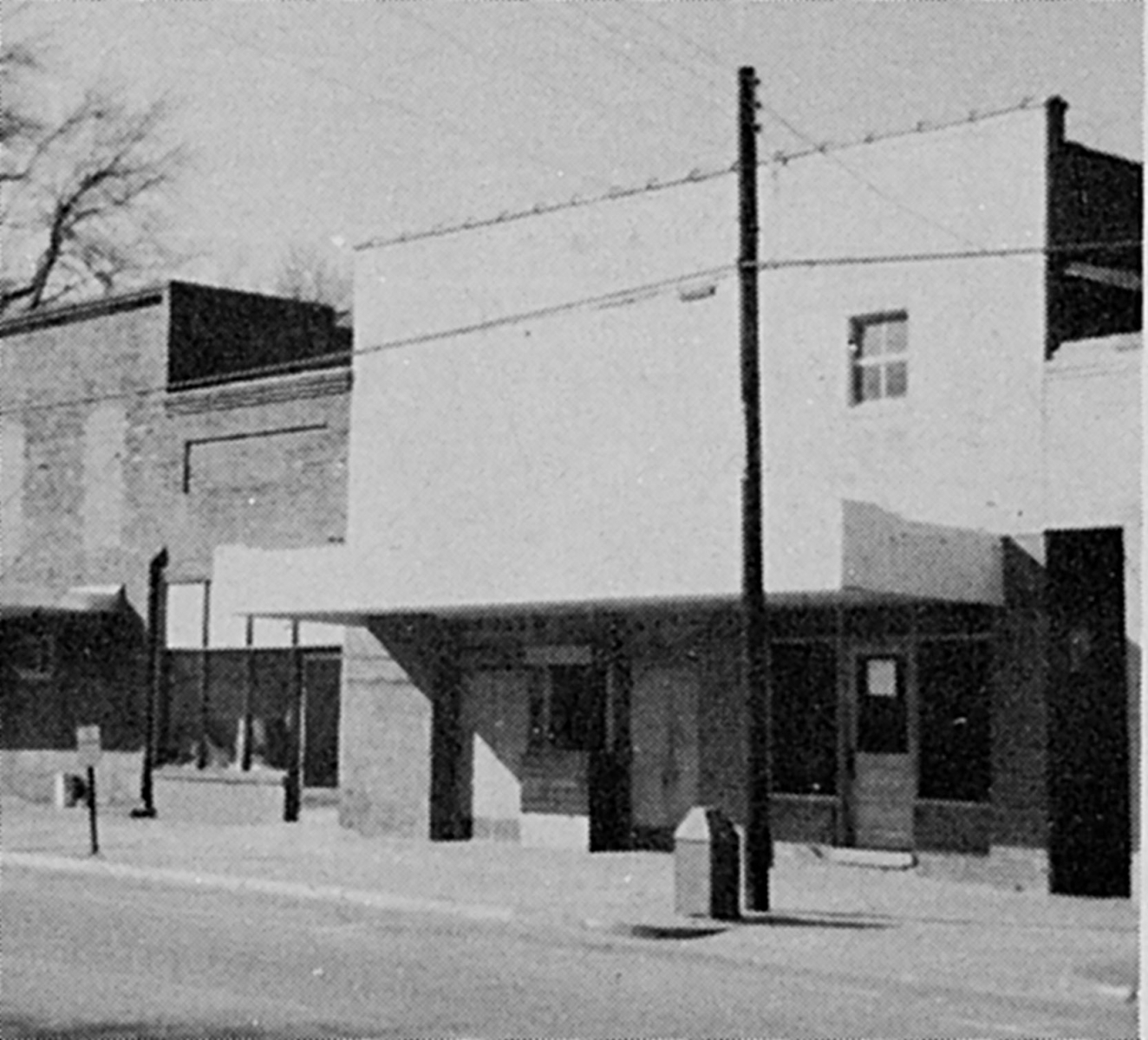 As of 2016 it houses Carolina Game and Fish.

This two-story, brick commercial building has been altered with the installation of replacement storefronts and stucco covering the second-floor level. The building has a flat roof behind a parapet roof with terra cotta coping. There is a one-light-over-three-panel door flanked by one-light display windows on the right (east) end of the façade with a stone stoop and a full-width boarded-up transom. On the left (west) end of the façade, paired one-light doors and two twelve-light windows are located in a wood surround covered with asbestos shingles. The former marquee is supported by cables and extends the full width of the façade, though has been covered with vertical plywood sheathing. The second-floor level has been covered with stucco, though a single two-over-two wood-sash window remains on the right end, lighting the former projection booth. A shed-roofed addition at the second-floor level of the right elevation sits atop the building at 120 West King Street. The building appears on the 1924 Sanborn map. 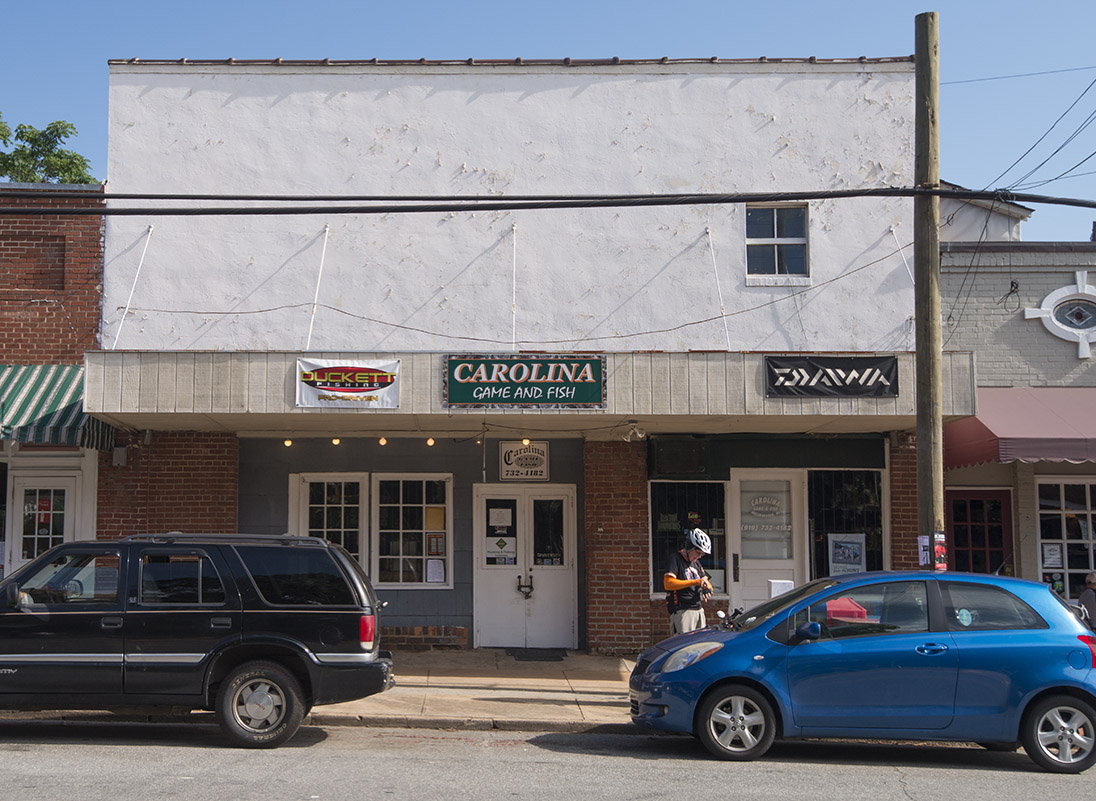 Carolina Game and Fish closed in 2018. As of July 2019, the new owner is proposing to "restore the original brick veneer, original arched window openings and the 1960s marquee" as a part of a renovation to use the the building as a restaurant. 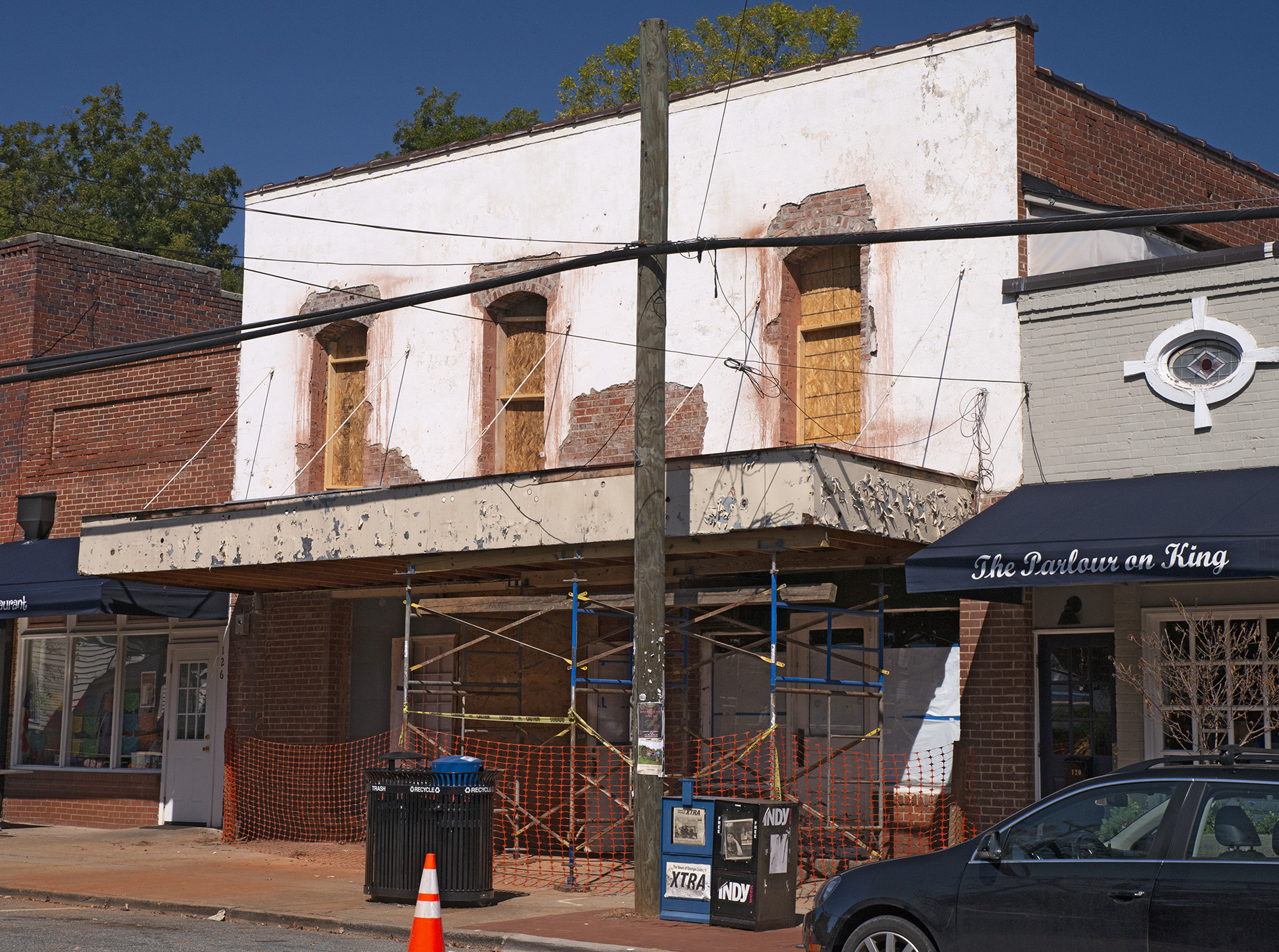