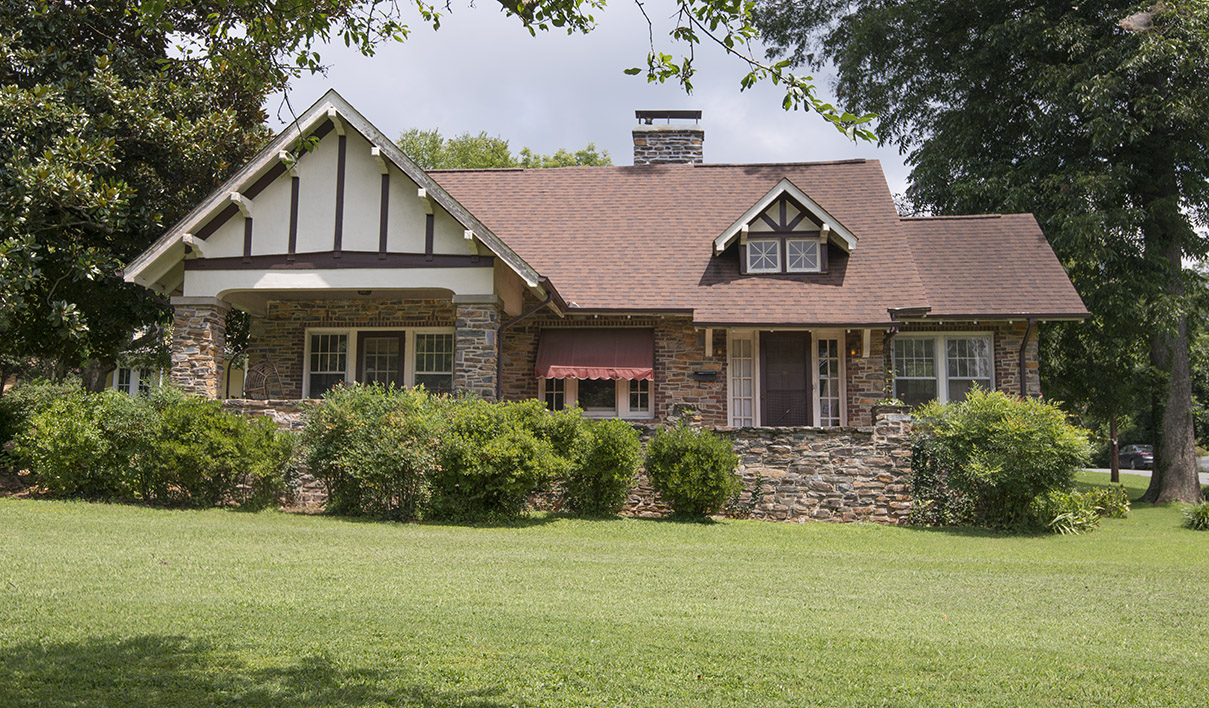 This house is one of only a handful of stone buildings within the district. The one-story, side-gabled house is a picturesque bungalow with both Craftsman- and Tudor Revival-style elements. The house is three bays wide and double-pile with a low gabled dormer on the right (south) end of the façade and a one-story, side- gabled wing on the right elevation. On the left (north) end of the façade is a fifteen-light French door flanked by eight-over-one wood-sash windows and sheltered by a one-bay-wide, front-gabled porch supported by full- height stone piers and decorated with a stone balustrade. It has exposed molded purlins and stucco with faux half-timbering in the gable. The porch floor continues the full width of the façade as an uncovered stone terrace. There is an eight-over-one window centered on the façade and flanked by eight-light casement windows. A six- panel door on the right end of the façade has ten-light sidelights and is sheltered by an engaged shed roof on molded brackets. The gabled dormer has a pair of starburst-paned windows with molded purlins and stucco with faux half-timbering in the gable. Other windows are eight-over-one windows with staggered brick surrounds and stone windowsills and there is an interior stone chimney. The eaves have wide overhangs with brackets or exposed rafter ends in the Craftsman style. There is an original one-story, hip-roofed wing at the right rear (southeast) with stone detailing and windows matching that on the main part of the house. A hip- roofed, partial second floor was added atop the rear ell, perhaps in the 1970s. It has a stuccoed exterior with faux half-timbering and eight-over-one wood-sash windows. A low stone wall extends along the driveway and there are stone steps to East Union Street. County tax records date the building to 1932. The house is associated with Charlie Robertson though the association has not been documented.