An attractive house, better known for its impressively beautiful gardens. 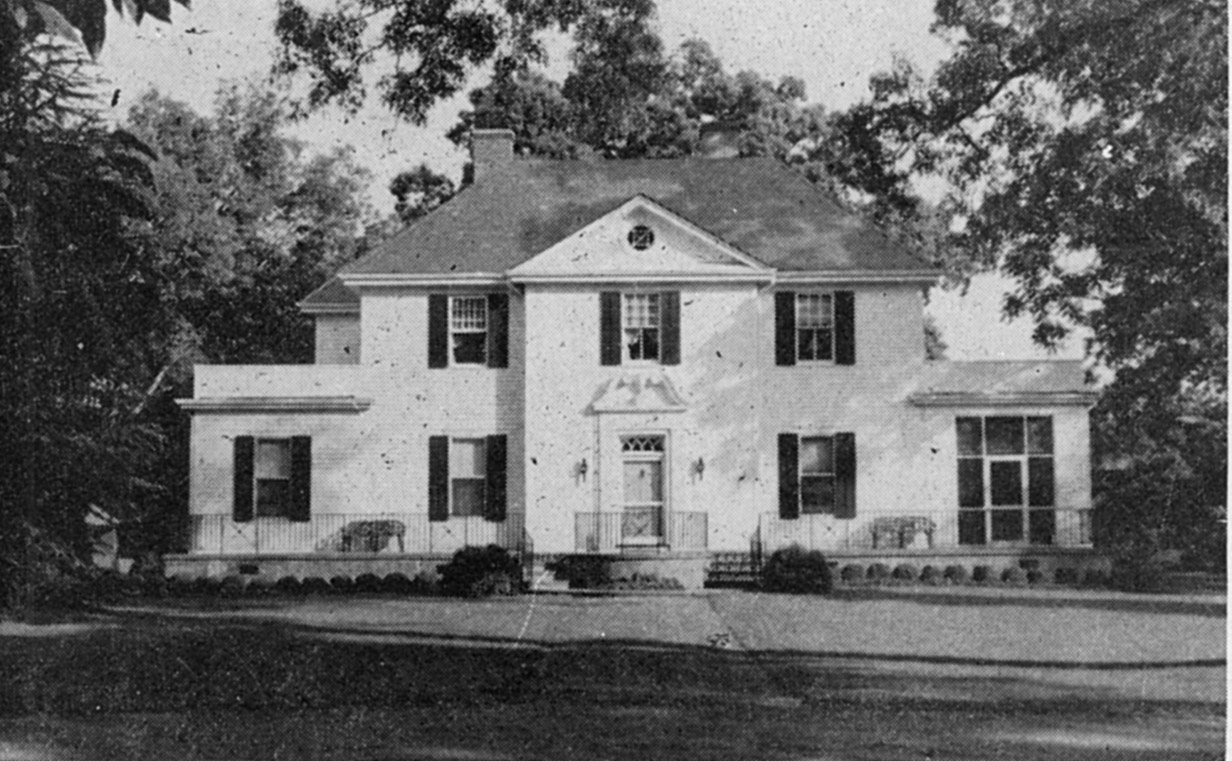 1960ish (History of the Town of Hillsborough)

Montrose, a property more significant for its landscape and its history of distinguished occupation than for the house, is sited on sixty-two acres of gently terraced land, which terminates at the Eno River. Due to a long and complicated series of burnings and alterations, the current Montrose is the third house built on this site. The core of this two-story, three-bay-wide, double-pile house dates to c. 1902, however, the high hipped roof, flanking one-story wings, and projecting Georgian Revival-style entrance bay date to 1948. The house has plain weatherboards, a slate roof, and two interior corbelled brick chimneys. The windows are a combination of one-over-one wood-sash windows on the first floor, nine-over-two windows on the second floor, and two-over- two windows on the rear kitchen wing. Windows on the first floor have molded hoods. The six-panel door has a multi-light transom and a classical surround with fluted pilasters and a swan's neck pediment. The entrance bay projects slightly under a pedimented gable with a multi-light round window. The one-story wing on the right (west) elevation is a screened porch, while the wing on the left (east) elevation is enclosed space. There is a shed-roofed dormer on the rear elevation, a two-story bathroom tower at the left rear (southeast) and a greenhouse attached to the right elevation of the rear kitchen wing.

The interior of Montrose features a center hall plan with two rooms on each side, and has a juxtaposition of elements from varying periods and properties. Original 1902 Classical Revival-style finishes dominate the interior. The entry foyer contains a set of double doors, which were originally part of the Burwell School. The east parlor contains a magnificent mantel and overmantel that apparently came from Vance County and is carved with whimsical Adamesque pilasters, pinwheel motifs, garlands, and beading. Other mantels are Federal-era artifacts from other houses. The octagonal dining room apparently follows the shape of the William Graham House, which burned in 1862. Interior doors are raised six-panel doors with egg-and-dart molded hoods.

Montrose was originally the property of James Hogg. The first house on the property was built around 1821 by Reverend William Mercer Green who acquired the property from William Kirkland. William A. Graham (Governor of North Carolina in the later 1840s) acquired the property in 1842, and Graham immediately built a law office. The Grahams enlarged the existing house, but the house then burned in 1862 and the Grahams moved to a house on W. Tryon Street. In 1874, William A. Graham gave the vacant land to his son Major John W. Graham, who built a twelve-room house on the foundation of the first house. This house burned in 1893. John Graham added two rooms to the law office and resided here until building the present house in 1902. After John Graham's death in 1929, his son Alexander "Sandy" Graham inherited it. In 1948, Lt. Governor and Mrs. Alexander Graham hired architect Watts Carr of Durham to remodel the Victorian-style house into a Colonial Revival-style house. Carr apparently assisted the owners in incorporating mantels, doors, and trim from historic Orange County houses into the remodeled house. The property has been owned and occupied by Nancy and Craufurd Goodwin since 1986. The landscape of the property is significant historically because its initial form was created in the 1850s by English landscape architect Thomas Paxton under the direction of Mrs. William A. Graham. The house and outbuildings are framed by trees and walks, the land is terraced to the river, and directly behind the house stands an extensive modern garden. 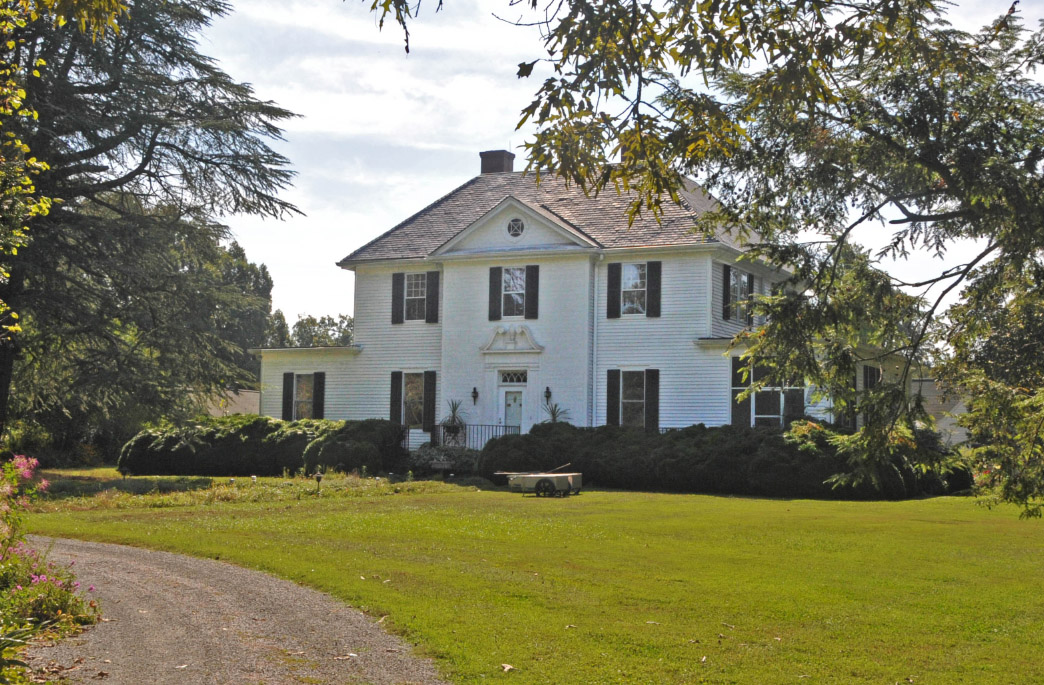 Montrose, named by William A. Graham for his ancestor, James Graham, Earl of Montrose, is one of Hillsborough's famous old gardens. The gracious, Colonial-type house is the third to stand on this property, two former residences having been destroyed by fire.

Mr. and Mrs. Graham purchased the land in 1842, just prior to his becoming Governor of North Carolina. Development of the garden was, of necessity, delayed for ten years, during the period that he served as Governor, and later in Washington, as Secretary of the Navy. On Mr. and Mrs. Graham's return to Hillsborough in 1852, the development of the Garden became their first project. For this purpose, Mr. Graham received permission from President Swain, of the University of North Carolina, for the loan of the University gardener. This English gentleman, Thomas Paxton, had an established reputation as a gardener, heightened by the belief that he was related to the famous English gardener, Joseph Paxton, the designer of the Crystal Palace in London. The Grahams kept Thomas Paxton for many months, paying him the sum of $1.60 per day, the going price at that time. It is believed that the Montrose garden then took its form, with the many unusual plantings, which make it so well-known today.

Near the house is a four-acre lake, on whose banks grow varicolored iris, intermingled with red Spider Lilies (Lycoris). There are clumps of cattails, and many wild flowers along the banks, from early spring through fall.

In the spacious grounds there are a number of fine trees, including the interesting Cryptomeria, Cunninghamia, Cucumber Tree, Carolina Hemlock, Deodar, Frazier Fir, and Incense Cedar, and a large Witch-hazel, which puts forth its pale yellow blossoms on naked branches at the very end of the season. A Japanese Yew replaces an enormous Irish Yew, which died at well over one-hundred years of age.

Mrs. Graham's serpentine border of dwarf English Box is planted to spring flowers, and later, when the Lycoris come into flower, there are hundreds of them in bloom, all propagated by Mrs. Graham from one bulb received many years ago. This planting is justly famous throughout the State.

At the west side of the house, there stands a large Tree Box bush, which grew from a cutting taken from the grave of Governor Graham. The unusual Birds' Foot Ivy has been used lavishly to border paths and walks. The law office of Governor Graham, a small white house under towering oaks, stands at the rear. Governor Graham enlarged it, adding extra rooms to accommodate his family, while rebuilding after a fire. Nearby is the greenhouse, where Mrs. Graham grows unusual plants. She is very adept at rooting slips, and many of the plants in the garden are a growing testimony to her skill.

The rose garden holds many varieties, both old and new, and beyond it there is a large planting of fragrant Ginger Lilies. Beyond this are the large vegetable beds, and Scuppernong arbor, making this garden one of both great beauty and utility.