Over-the-River was built between 1820 and 1825 by William Norwood, for his son, John Wall Norwood, on land originally purchased by James Hogg, a native of Midlothian, Scotland. John Norwood sold it about 1840 to James Webb, and in 1936, the property was sold to Mr. and Mrs. James Webb Cheshire. 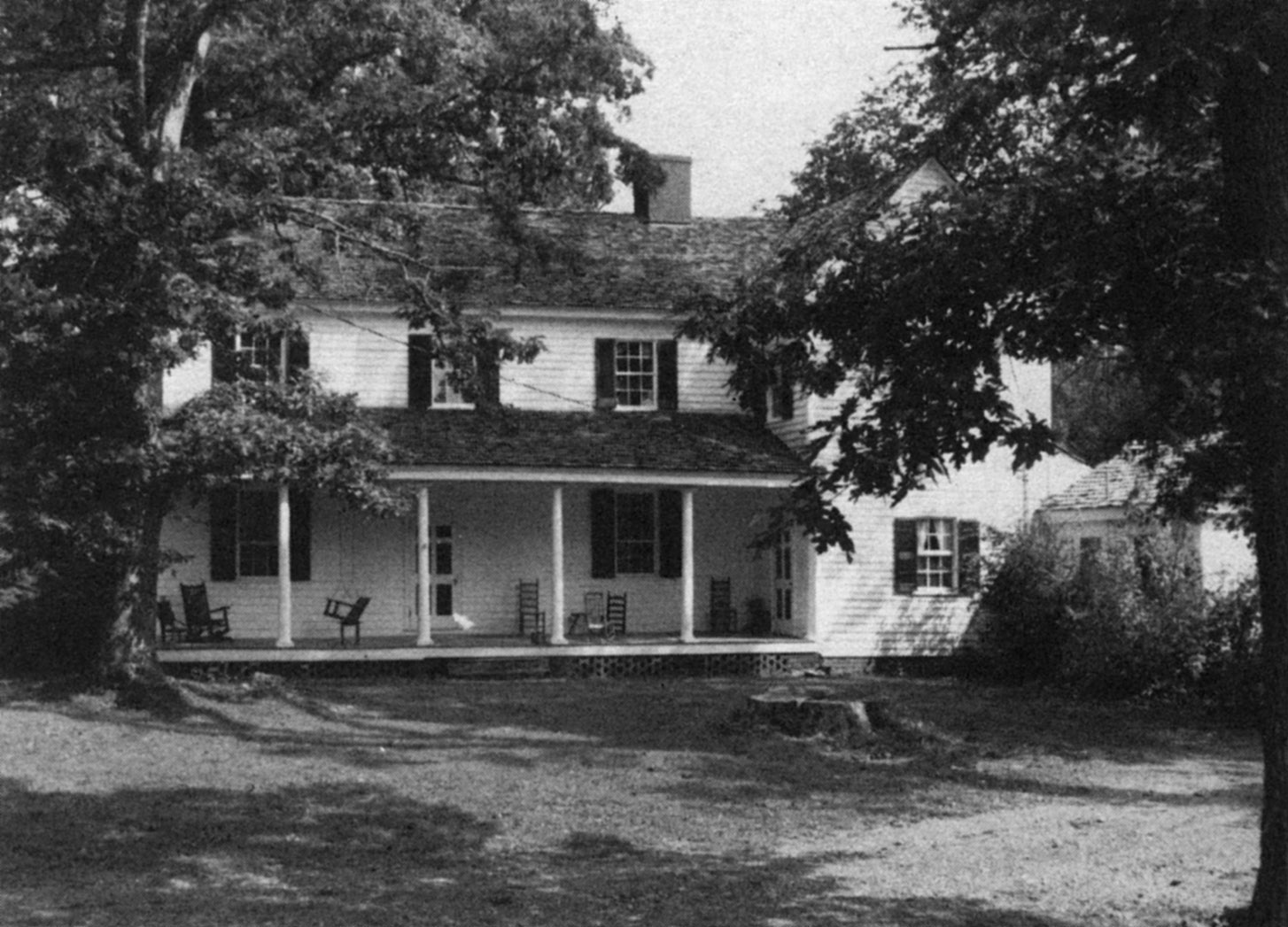 Over-the-River, before 1989 (From the Pelican Guide by Lucile Dula; picture by Thomas C. Wagstaff)

Located south of the Eno River, opposite downtown Hillsborough, and aptly named “Over-the- River”, the Norwood-Webb-Cheshire House is four bays wide and single-pile with a projecting, front- gabled wing on the east end of the south façade. The house has weatherboards, nine-over-six wood-sash windows on the first floor and six-over-six windows on the second floor and on the east wing. A six- panel door on the north elevation (facing the river) is sheltered by a front-gabled portico supported by slender columns. A six-panel door on the south elevation is sheltered by a shed-roofed porch supported by slender columns. The porch extends the full width of the elevation, terminating at the front-gabled wing, which is directly accessed via a door at the end of the porch. There is an exterior brick chimney in the west gable, an exterior chimney on the east elevation, and an interior brick chimney. A one-story, hip-roofed wing projects from the southeast corner of the front-gabled wing. The left part of the house was constructed by Mr. and Mrs. John Wall Norwood around 1823 and contained two rooms on each floor with a center hall. In 1848, the house was sold to Mr. and Mr. James Webb Jr. and they added to the two-story wing. In 1936, the property was sold to Mr. and Mrs. James Webb Cheshire. (No access to the property was permitted; house and outbuilding descriptions are based on earlier survey photos and aerial photos.)

The James Cheshire house was built between 1820 and 1825 by William Norwood, for his son, John Wall Norwood, on land originally purchased by James Hogg, a native of Midlothian, Scotland. John Norwood sold it about 1840 to James Webb, grandfather of the present owner. He and his wife, Sarah Frances Cheshire, were often visited by her brother, Dr. Joseph Blount Cheshire, a practicing attorney of Edenton and later Rector of Calvary Church at Tarboro. He also visited another sister, Elizabeth, Mrs, Duncan McNair, who lived in the house across the way, "Highlands," later owned by the Collins family. Dr. Cheshire was an enthusiastic planter of shrubs. trees, and flowers. He procured plants from all over North Carolina, and requested missionaries in many foreign parts to send him plants, with which he filled his church yard at Tarboro. Some he planted on his own grounds, and others in the yard of St. Matthew's Church, notably the Western Arborvitaes, and weeping cedars, which he grafted on native cedar stumps. He laid out flower beds around three sides of the house and, on the north side, all the way to the Eno. A circular drive is still to be traced at the front. The gardens were kept in order, until after the death of Miss Mary Webb, the expert flower gardener of the family, about 1930.

South of the house were a large vegetable garden, and two glass-covered flower pits. On the south were a carriage house, a stable, and pig pens, and a large cow barn, all still in use in 1890. The land beyond the branch, southeast of the house, was the cow pasture. This land went down to the Eno. A path along the river, known as the "Dark Walk," began in the Cheshire land near the "Baptizing Hole," so called because it was used for baptisms by people from all over the county. The "Dark Walk" continued along the Eno, all the way to town. There was a spring house down the hill, southeast of the house under the big pecan tree. Ice for the house came from the Eno. The ice house stood at the crest of the bluff above the river. The hole in the ground is still there. There was formerly a bridge across the river at this point. A second ice house was later put in, where the present driveway enters the highway.

There are two houses in the garden: a two-room structure with a big fireplace-the laundry house, and a small house, called "Kansas," where Mr. Cheshire's mother's older brothers, John Cox Webb and James Webb slept, before they went away to the Civil War. It was a primitive sleeping place, and called "Kansas," because that state was frontier at that time.

The magnificent magnolias were planted by Joseph Blount Cheshire. The large, century-old pecans are the oldest in Orange County. The nuts from which they grew were brought from Alabama by John Cox Webb and planted by James Webb.