Twin Chimneys is reputedly a pre-Revolutionary house, however the exact date of construction is not known. The twin pairs of chimneys, for which the house is named, were constructed by Reverend John Knox Witherspoon between 1817 and 1832 and are laid in a Flemish bond. 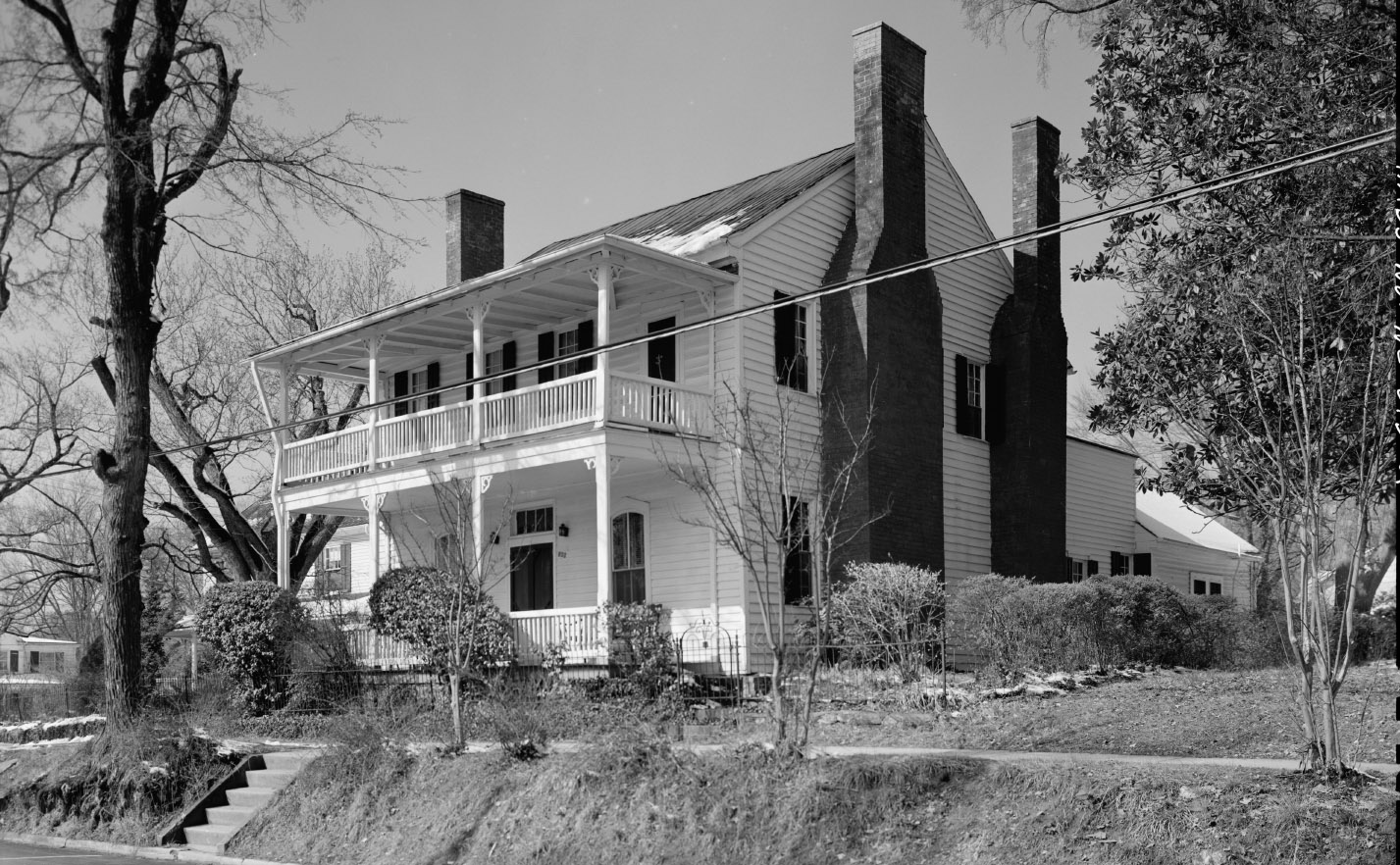 Twin Chimneys, so named for the paired chimneys in each gable end, is sited on a hill on West King Street, directly across from the Colonial Inn and the Parks-Richmond house, and is dominated to a full-width, two-story porch. The two-story, side-gabled frame house is three bays wide and double-pile with a one-story, shed-roofed wing that extends the full width of the rear elevation. The house has a stone foundation, weatherboards, two-over-two wood-sash windows with arched upper sashes on the first floor, nine-over-six windows on the second floor, and several six-over-one windows on the side elevations. Windows on the first- floor façade have peaked wood surrounds. The double-leaf one-light-over-one-panel entrance has a four-light transom. It is sheltered by a two-story, hip-roofed porch supported by chamfered posts with original railings at the first and second floor; this porch was installed around 1816 and replaced an earlier portico and original dormer windows [Bellinger]. The twin pairs of chimneys, for which the house is named, were constructed by Reverend John Knox Witherspoon between 1817 and 1832 and are laid in a Flemish bond. Exterior woodwork, including the pointed-arch window surrounds on the façade were added around 1900, when owner D. C. Parks hired Jules Körner to update the house to match the refurbishments to the Colonial Inn and the Parks-Richmond House across the street. A one-story, front-gabled wing, originally a separate kitchen structure, has been attached to the right rear (northeast) corner of the house; it has weatherboards, six-over-six wood-sash windows, a 5V metal roof, and an exterior brick chimney in the north gable. Important interior details include a central hall plan and wide pine planking. The chair railing in the central hall came from Moorefields and other materials from the Nash and Kollock School. A basement is also present under the house with an earthen floor. An iron gate from Stewart Iron Works in Cincinnati, Ohio, separates the house from the pedestrian traffic of the sidewalk.

Twin Chimneys is reputedly a pre-Revolutionary house, however the exact date of construction is not known. It is important to note that a house is sited at the exact location on the 1768 Sauthier Map of Hillsborough but it cannot be assumed that the houses are the same. The deeds show that on August 29, 1768, the Town Commissioners sold "Lots 21 and 31 to William Fanning who has built a Mansion House thereon." Although the property was transferred to new owners three times between 1768 and 1788, there is no mention of buildings or improvements until September 4, 1788 when it was purchased by Daniel Mallett. The property has had many owners since 1788 including William Duffy, Martha and William F. Strudwick, Reverend John Knox Witherspoon, Hugh Waddell, William F. and Harriet H. Strayhorn (postmistress, 1873-1881), D.C. Parks, and various members of the Forrest family. 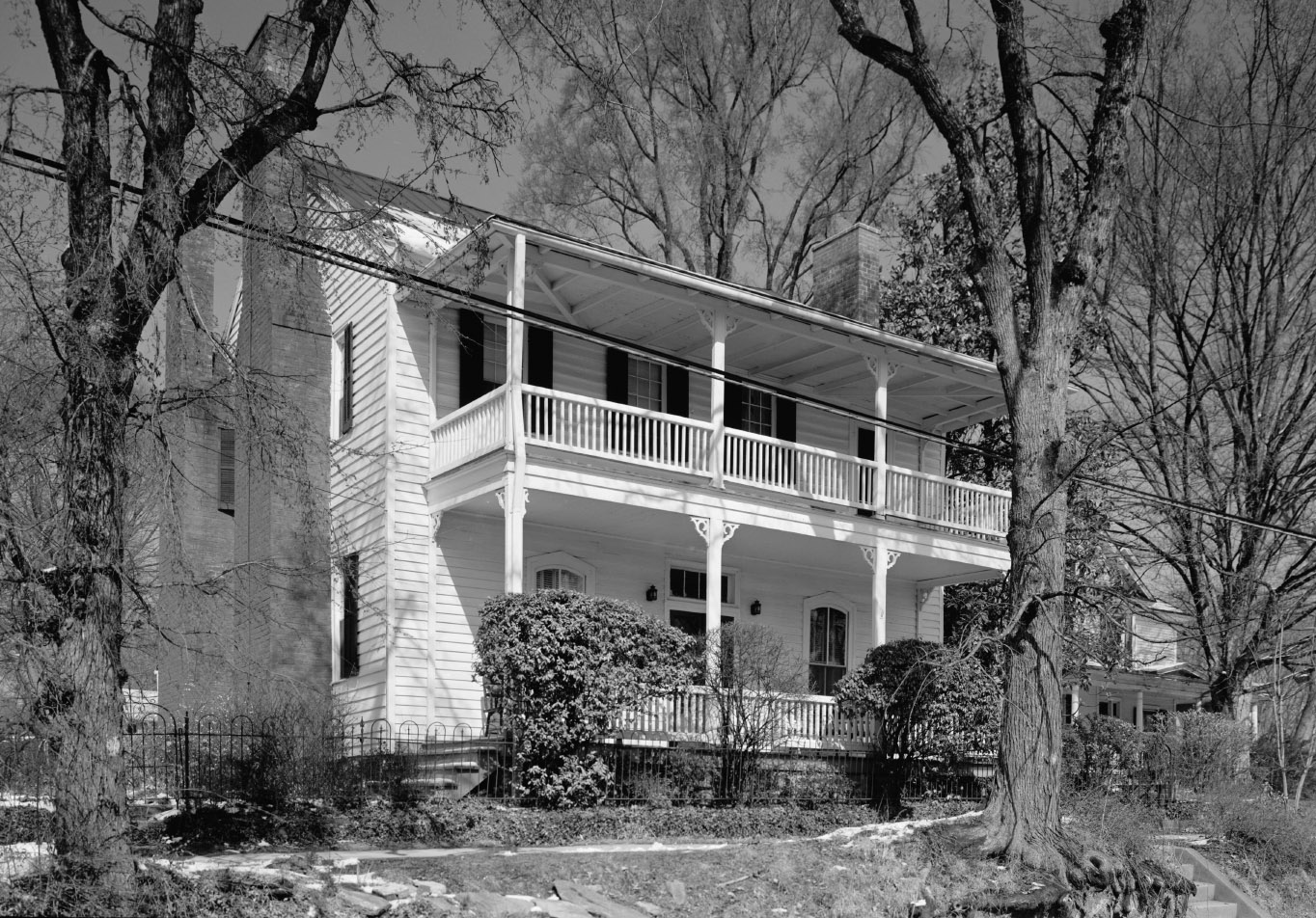 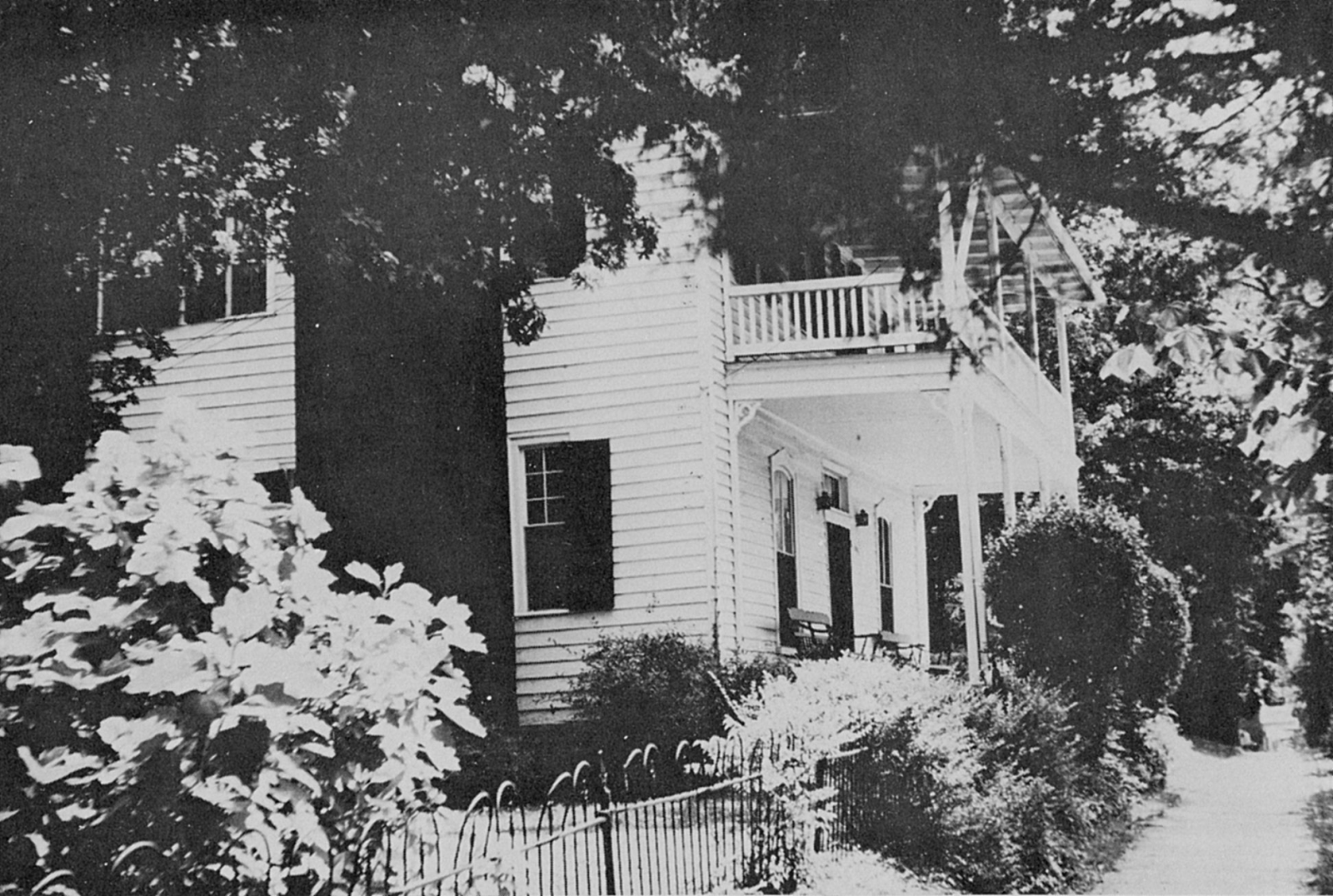 This is a most delightful old house, with four huge chimneys and a second-floor balcony, from which a view of the busy thoroughfare, King Street, may have been enjoyed down through the years. The lot on which it stands was once owned by Edmund Fanning.

It is interesting to know that this house was the setting for the old romantic novel, "Jocelyn Cheshire." According to the story, the heroine concealed her lover in the attic to protect him from Cornwallis' army.

Pine wainscoting and mantels are a feature of the simple, but charming interior. The old kitchen, once separate from the house, is now connected with it. The house served at one time as Hillsborough's Post Office. The property was acquired about 1900 by Miss Margaret and Miss Josephine Forrest. The garden, always small and intimate, held old-fashioned flowers for picking. Hollyhocks in a row at the east side were a long-remembered feature. Of the old roses, only one remains, an ancient pink moss, which still blooms against the fence in the east front corner. 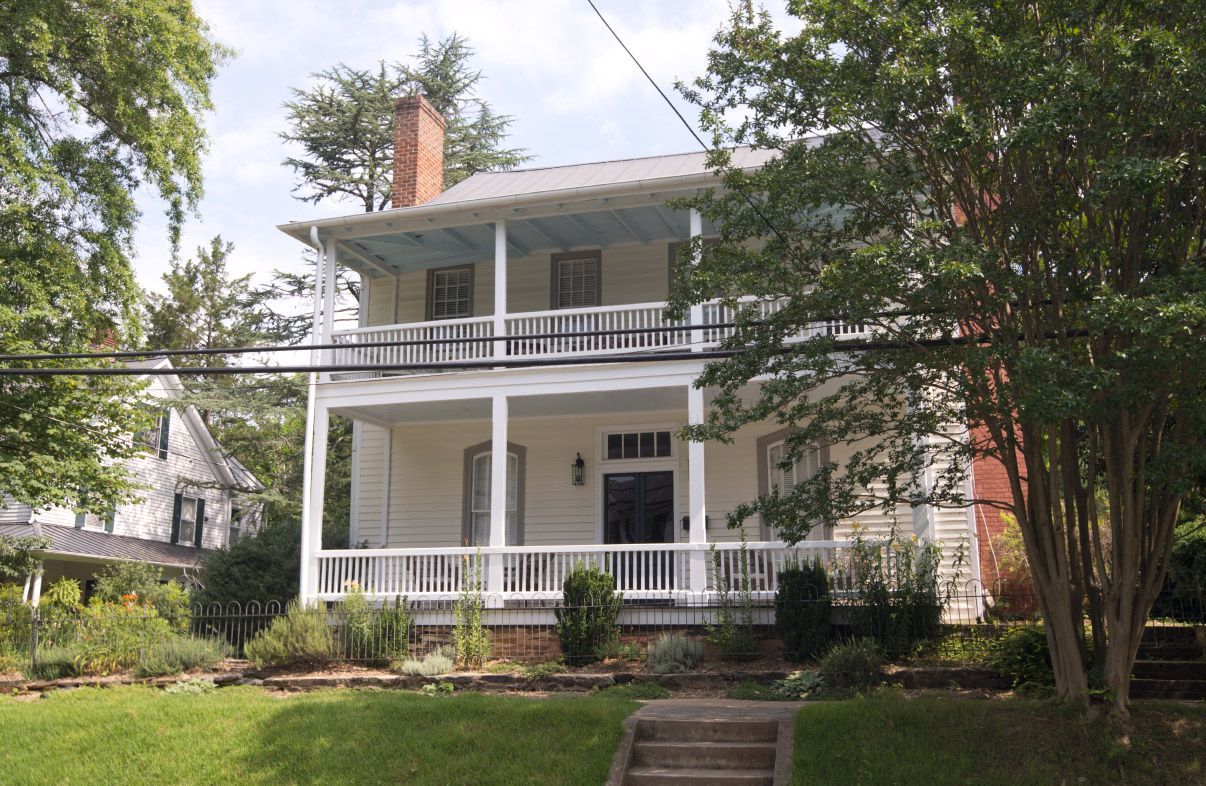 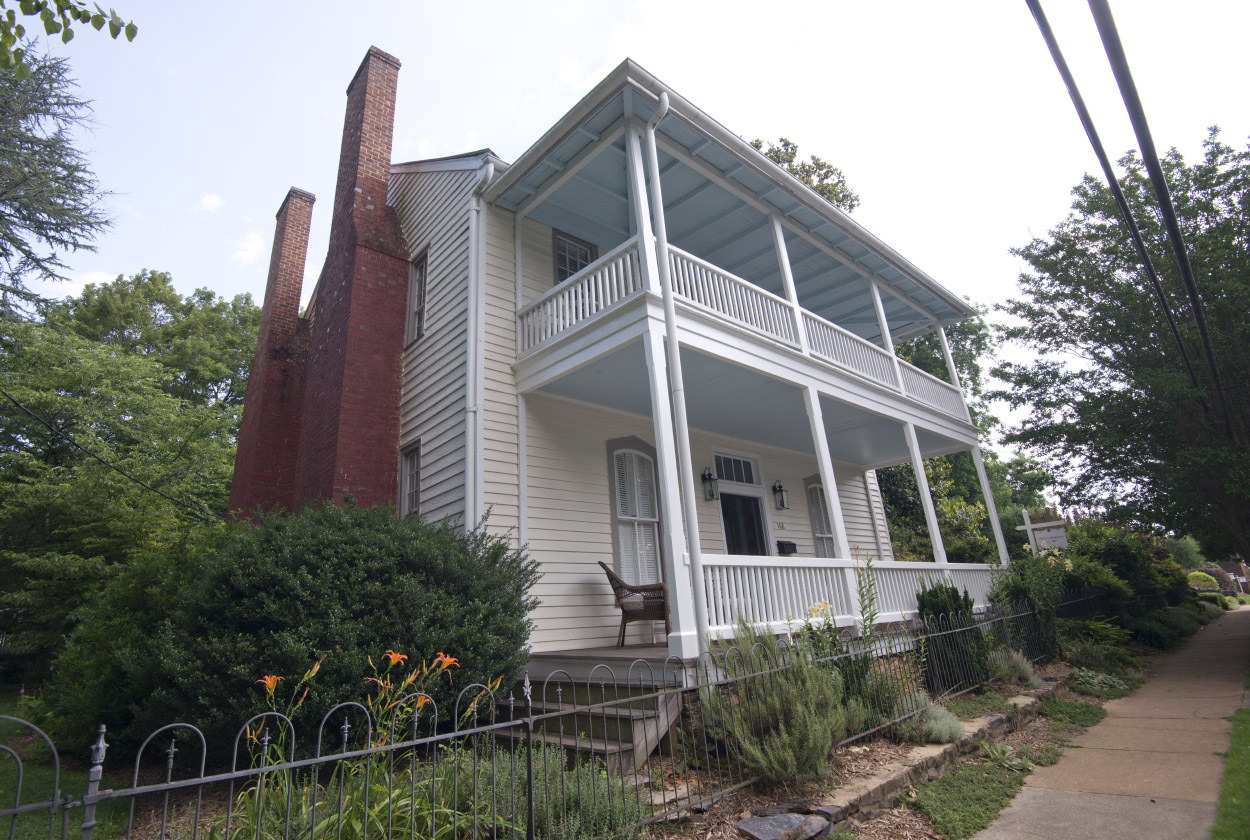