Built around 1800 as a log schoolhouse by Dr. James Webb, and expanded into a full-fledged house in 1837. 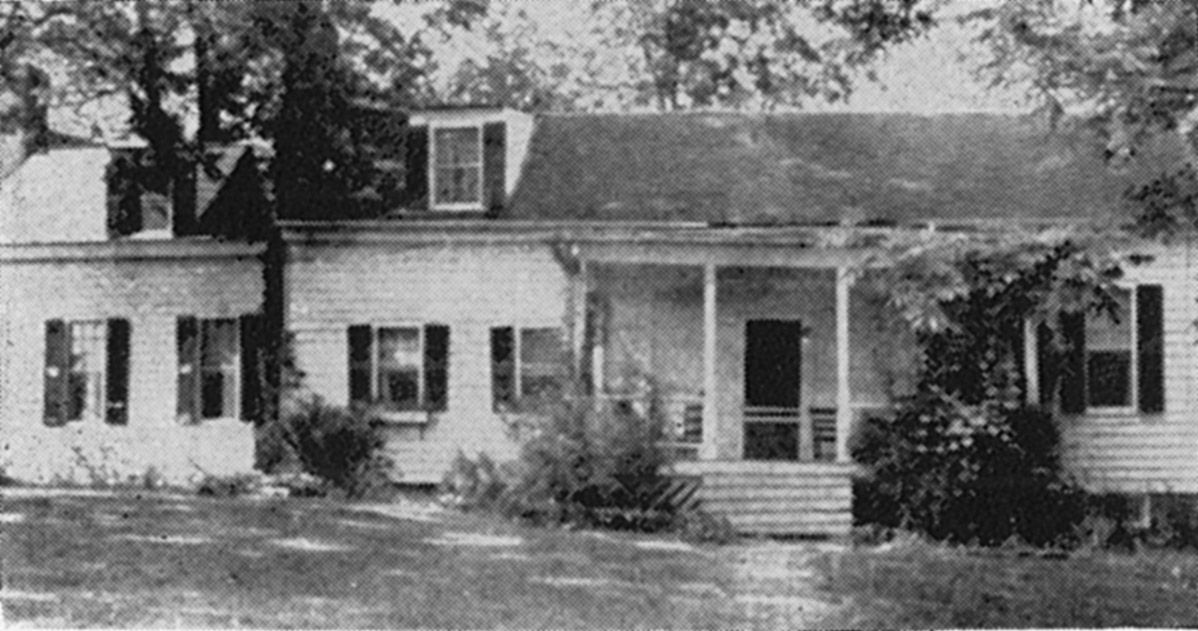 Constructed around 1817 as a one-room log schoolhouse, this one-and-a-half-story, side-gabled Federal-style house is five bays wide with plain weatherboards and nine-over-one wood-sash windows. The left (west) two bays were likely added later and feature six-over-one wood-sash windows and a shed-roofed dormer. The six-panel door has a molded surround and four-light transom and is sheltered by a two-bay-wide, hip- roofed porch supported by chamfered posts. There are exterior brick chimneys in each gable end, one laid in a Flemish bond, both with freestanding stacks. A two-bay-wide, one-and-a-half-story, side-gabled wing on the left rear (northwest) has plain weatherboards, nine-over-nine windows on the first floor, a six-over-six window in the dormer, and an exterior brick chimney in the left gable. The wing may encompass an earlier kitchen. A gabled ell at the right rear (northeast) features four-over-four wood-sash windows and a fifteen-light French door with twelve-light casement windows and three-light transoms over the doors and windows. Dr. James Webb constructed a one-room log schoolhouse around 1817 and built the present house around the log schoolhouse, which is now the living room, around 1837. The right rear wing was added and the roofline of the left wing was modified in 2006. The lot features mature boxwoods, hardwoods, and a dry-stacked stone retaining wall.

The Webb House (1812) was originally a one-room schoolhouse built by Dr. James Webb, a founder of the North Carolina Medical Society. the school was operated by Governor Thomas Burke's Daughter, Mary ("Polly") Burke, for the Webb children and their neighbors. It is believed that she has taught them in her home next door before she opened the school.

From the 1830s until 1983, the house was a private residence for successive generations of Dr. Webb's descendants, with the various families enlarging it to meet their needs. Over the years eight rooms have been added to the original log house, which is now the living room.

The interior, with ceilings that vary from high to low and windows in assorted sizes, is a study in contrasts. The exterior, too, is said to have a 'mind of its own' and refuses to adhere to a specific architectural pattern. However, with its old brick walls, falnked by parallel rows of boxwoods, its well house and old-fashioned garden, this unique frame house is completely at home beside its colonial neighbor, Heartsease."

I rather doubt this was the schoolhouse that Ms. Burke used for instruction; I do believe that structure sat behind Heartsease, and is this structure.

Mr. David Terry, resident of the house in 2016, states: "The log-schoolhouse existed before the house assumed its current form in 1800 and was registered on-deed as a house (rather than an outbuilding of next-door Heartsease, where Polly Burke lived). 1837 would be the date when the back room (formerly a dining room) was added."

From Gardens of Old Hilllsborough, 1971

The friendly little house looks down its brick walk and seems to say, "Come in." The yard is inviting with trees and shrubs and, on the east side is an old-fashioned well, neatly kept and surrounded with flowers. Mrs. John Graham Webb, the present owner, has rooted much of the boxwood.

We think the house was built in the early 1800s by Dr. James Webb, and that it was a one-room log house. Dr. Webb himself lived next door, while the log house was used as a school, in which Governor Burke's daughter, Miss Mary W. (Polly) Burke caught the Webb children. After the children grew up, the little house was enlarged by Dr. Webb, and used as a residence. Dr. Webb's daughter, who married Dr. Osmond Long, lived there for a while. After they moved away, his son, Thomas Webb, occupied the house and, as the family grew, more rooms were added, until it looked much as it does today. One of the quaint things about the house is the little surprise in the way of stepping up, or stepping down on different levels.

The house has a charm of its own, and is fortunate in being surrounded by beauty on all sides. At the back of the house there is a flagstone terrace, bright with flowers. On a trellis nearby clambers old-fashioned clematis. There are some of the old, much-loved yellow roses like Safrano, Harison's yellow and Lady Hillingdon. Many of the old bulbs find a home here. Among them are jonquils, narcissus, old blue hyacinths, feather hyacinths, pink and white oxalis, and cowslips. Among the shrubs are Persian lilac, spirea, and winter jasmine. Last, but not least, as we turn to go, there stands the boxwood, in dignity and beauty.