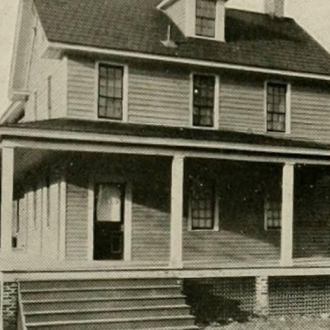 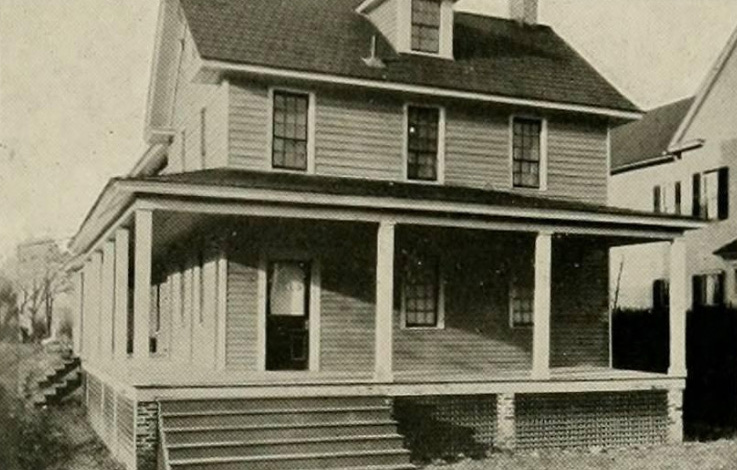 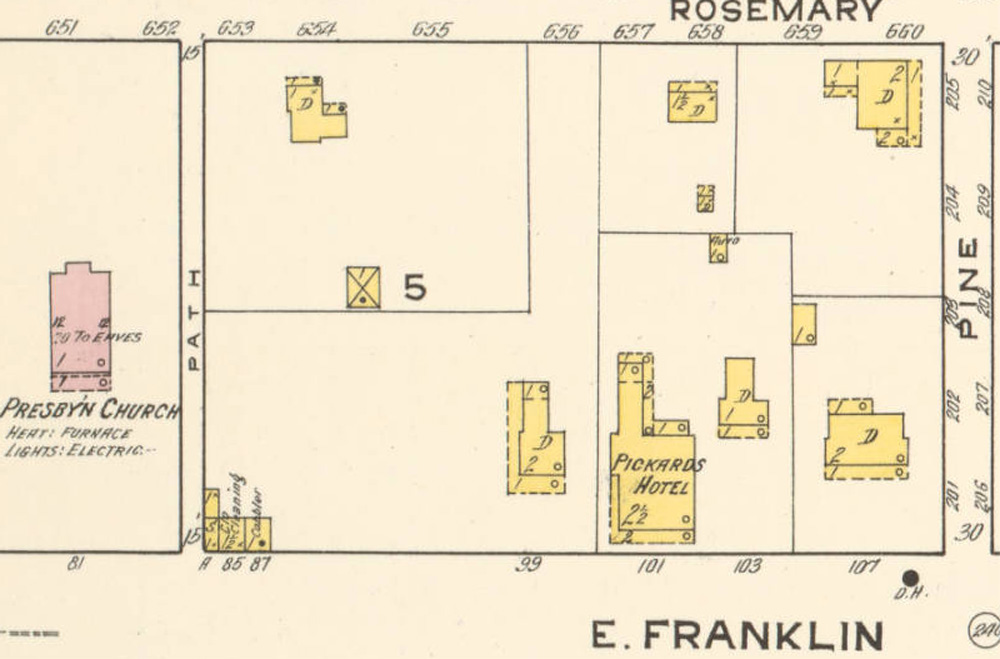 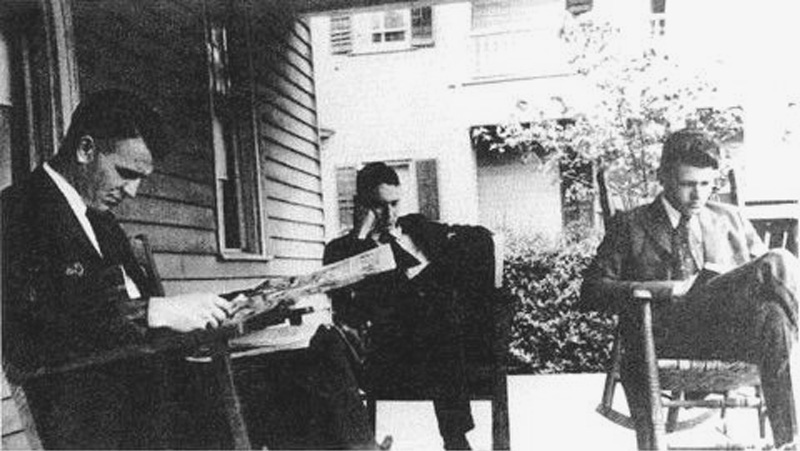 Built as a dwelling sometime between 1911 and 1915 on the site of an earlier dwelling (known as the "bat house" because of bats that lived in the chimney) that had been built (likely) in the 1870s. This property was part of the 1915 Walter Grimes property subdivision.

The Kappa Chapter of the Pi Kappa Phi fraternity rented and moved into this house sometime between 1915 and late 1918. The fraternity moved into a new house in late December 1918, but had to move back into this house after a fire that took place January 8, 1919 burned their "new" house. This was the future author Tom Wolfe's fraternity from late 1918/early 1919 to 1920. Of the fire, he wrote "Kappa was not daunted by this. The next day we moved back into the house we occupied last year, where we have been comfortably located since." However, due to increased membership, the fraternity soon began raising funds in order to build a new house they were hoping to start construction of later in the year (1919).

By 1921 Pi Kappa Phi moved out of the structure and the property was purchased by Frances "Fannie" Adele Tankersley. In 1924, the structure was greatly enlarged and Frances and her son William L. Tankersley (a dry goods merchant/real estate dabbler) moved into the house. 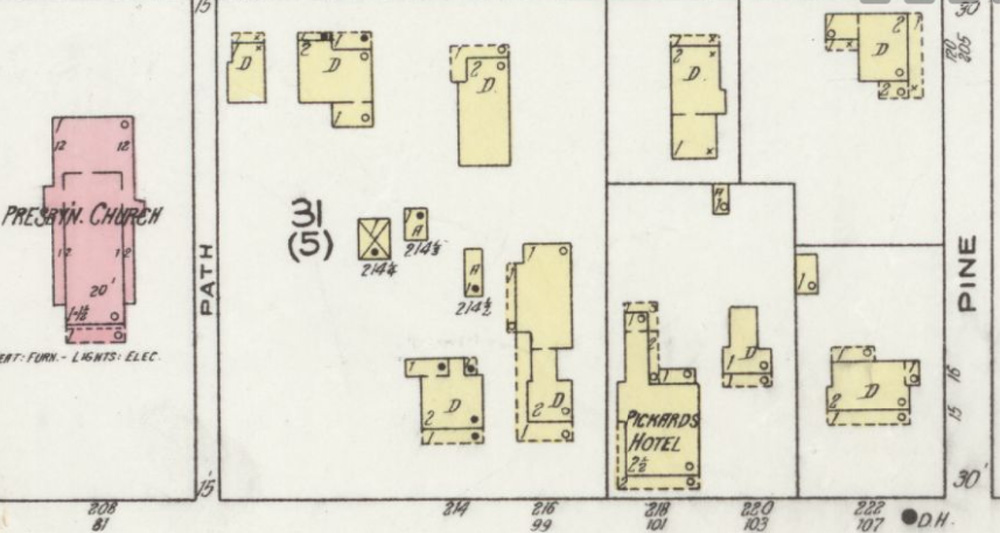 After William Tankersley died in 1931 and his mother Frances moved to Lexington, NC, a Mrs. C. R. Weaver is said to have moved into this house (as a renter?). The property sale or sales is/are a bit murky after 1927, but in December 1938, this property and several adjacent properties were sold to the Jefferson Standard Life Insurance Company.

The property was purchased in December 1938 by Virgil Jenkins (and family). Purchased in March 1946 by M. J. Dawson (and others). Purchased in January 1949 by Eloise Antley Huryes.

It was purchased in August 1952 by Kappa Delta Sorority, Inc. It is hard to tell what (if much or any) of the original structure exists under the combinations and additions that have made since the 1950s..

"This two-story, gable-on-hip-roofed, Colonial Revival-style house has a distinctive two-story, engaged front porch with decorative wrought-iron posts and railings. The house is three bays wide and five bays deep with plain weatherboards, a wide cornice, and two interior brick chimneys. A six-panel door, centered on the façade, has multi-light, geometric-light sidelights and transom. It is flanked by replacement nine-over-nine wood-sash windows with six-light sidelights at the first floor level. On the second-floor façade, a pair of fifteen-light French doors opens to the second-floor porch and are flanked by paired ten-light casement windows. All of the windows have molded wood lintels and several secondfloor windows on the right (east) and left (west) elevations have modern metal balconies on metal knee brackets that serve as fire escapes from the second floor. The two-story porch is supported by decorative wrought-iron posts with a wrought-iron frieze and decorative wrought-iron railing at the second-floor level. The first floor porch was modified before 1974 with the construction of a low brick wall that encircles the porch. There are louvered vents in the small gables, twelve-over-twelve wood-sash
windows on the first-floor side elevations, and eight-over-eight windows at the second-floor level. A one-story, hip-roofed wing at the left rear (northwest) has an inset screened porch at its rear and a metal railing at the roofline. A one-story, hip-roofed wing on the rear (north) elevation has eight-over-twelve
windows. A second-floor catwalk at the left rear connects to a large, two-story, T-shaped, gable-on-hiproofed wing that faces East Rosemary Street at the rear. The catwalk has bands of eight-over-eight wood-sash windows over weatherboards. The rear wing features double-hung windows with transoms
along the west elevation, and three one-story, inset bays on the east elevation that feature full-height doors and windows that open to an uncovered terrace. The wing has eight-over-eight windows at the second-floor level and an entrance on the rear (north) elevation is sheltered by a hip-roofed porch
supported by turned posts on a brick foundation. A low stone wall extends across the front of the property bordering the sidewalk. The house appears on 1911 map with a large rear addition by 1925, however, the current rear addition likely dates to the 1980s, probably when the building began use as a sorority house. In 1928, it was occupied by William Tankersley." 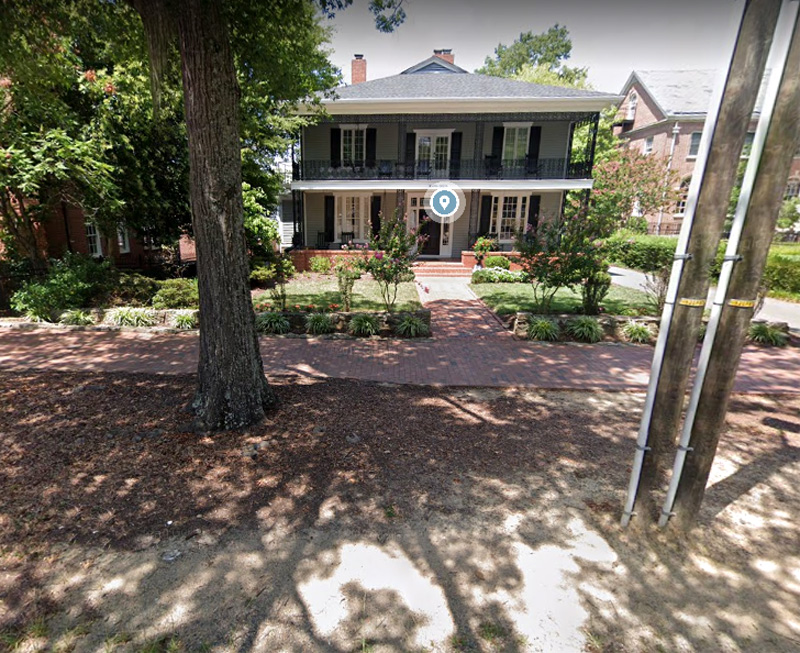