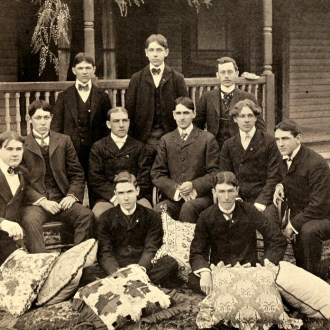 This structure was built for the Alpha Tau Omega fraternity in 1929-1930.

This structure was purpose-built for the Alpha Tau Omega (A.T.O.) Fraternity in 1929-1930. It was designed by Nathaniel C. Curtis, a professor of architecture at Tulane University and a UNC alumnus. It was built at a cost of $29,353.50, "not counting lighting fixtures."

The property was purchased in November 1891 by the trustees of the Alpha Delta Chapter of the A.T.O. The first structure was a wood frame house that was built in 1893 for the fraternity. A 1909 fire destroyed the first house, and a new one was constructed. Another fire, in 1927, caused the second structure's demise. 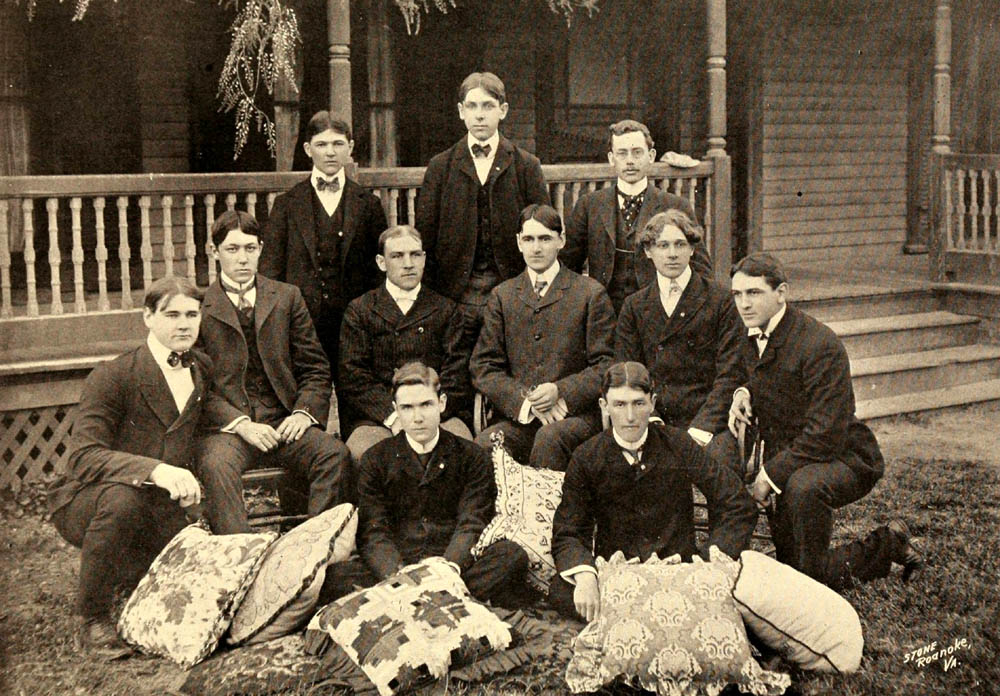 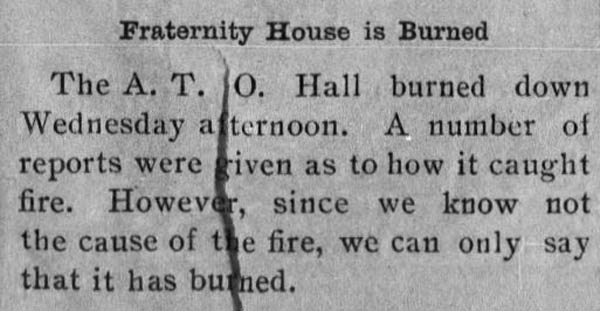 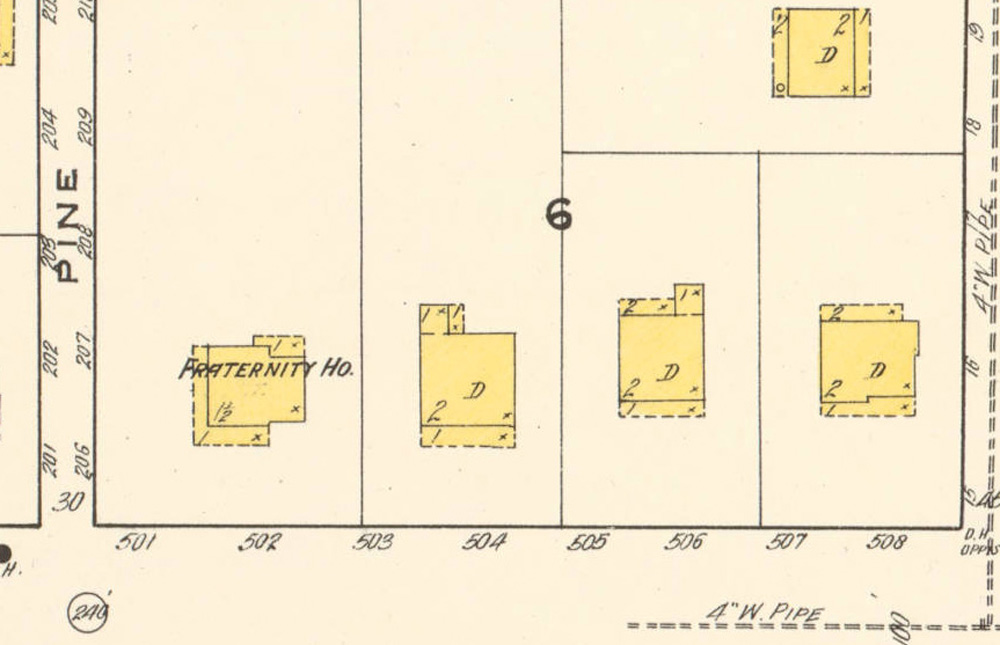 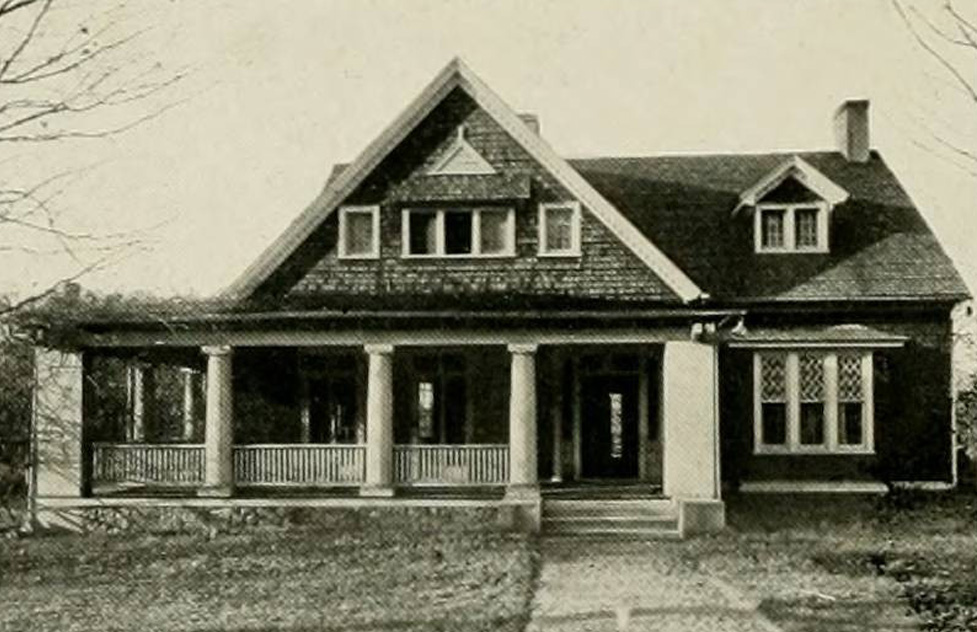 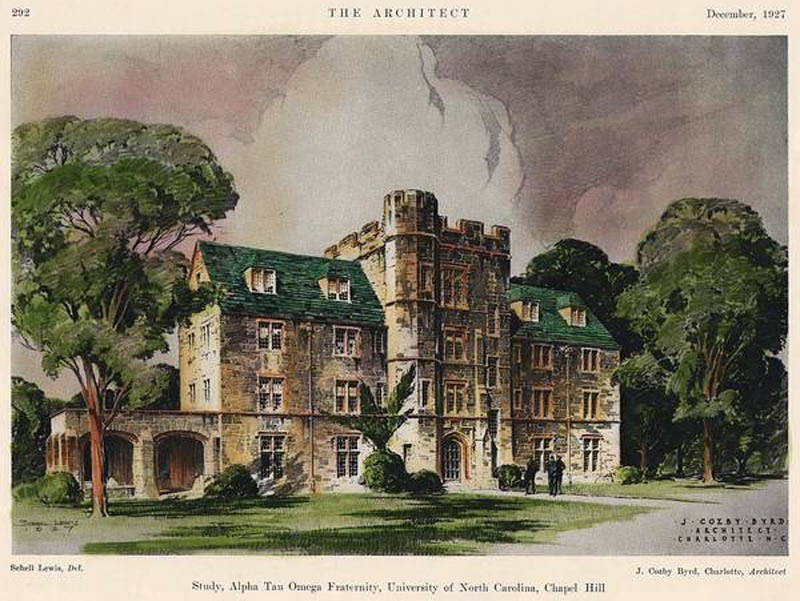 What it was to look like; an architectural study by J. Cozby Byrd and Schell Lewis, 1927 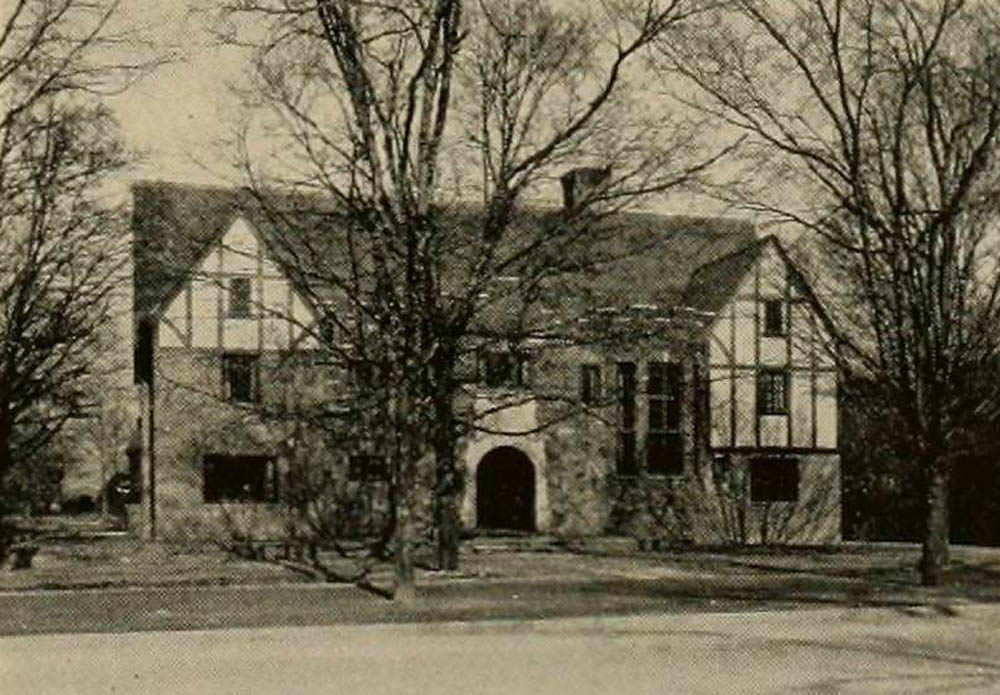 What it actually looked like; 1931 (via UNC's Yackety Yack) 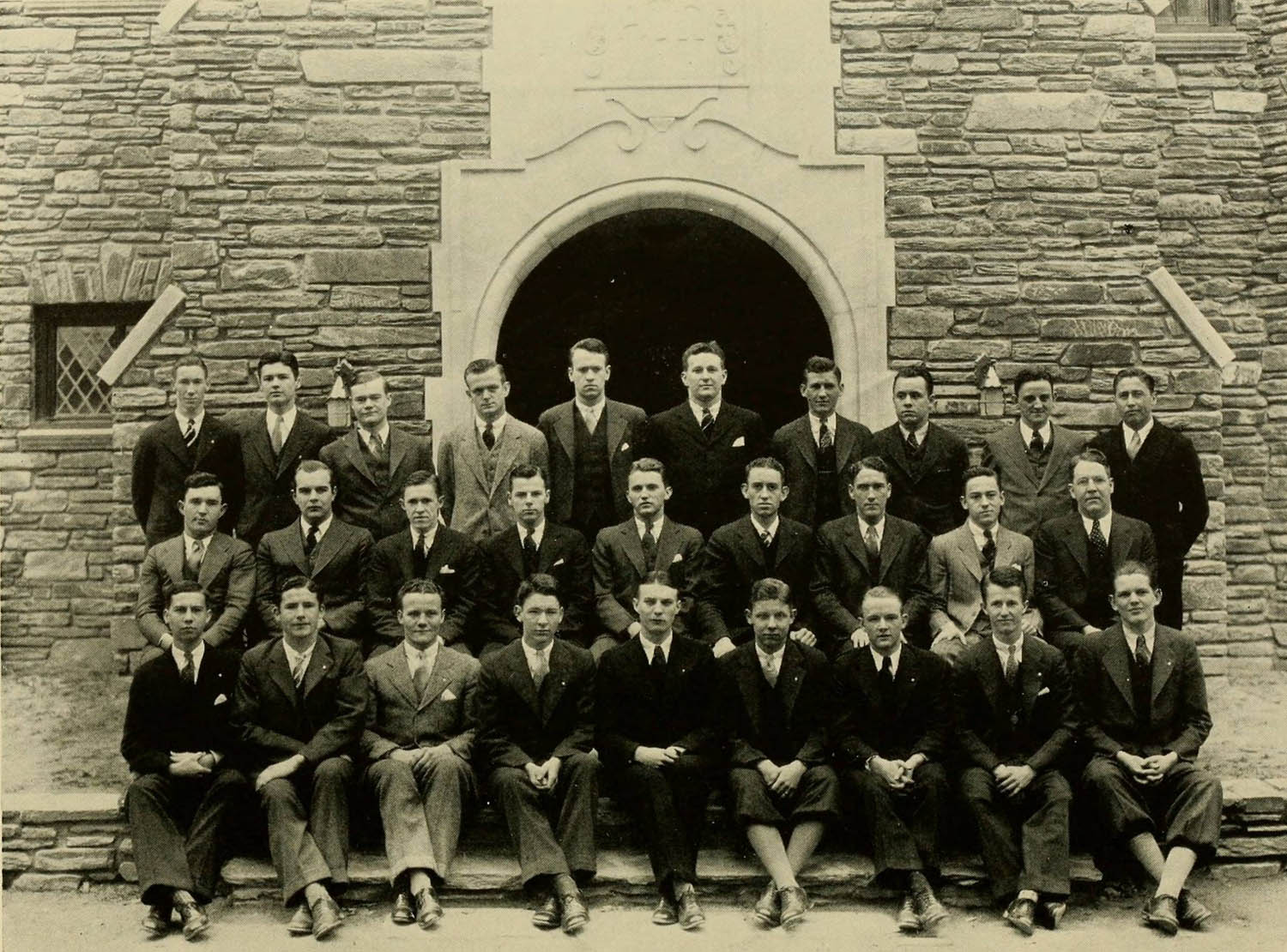 During World War II, when military programs at UNC put a strain on the campus housing situation and many fraternity members were serving in the military, the A.T.O. house was occupied by the Delta Delta Delta sorority from September 1943 to early 1946. By June 1946, A.T.O. had moved back into their house. 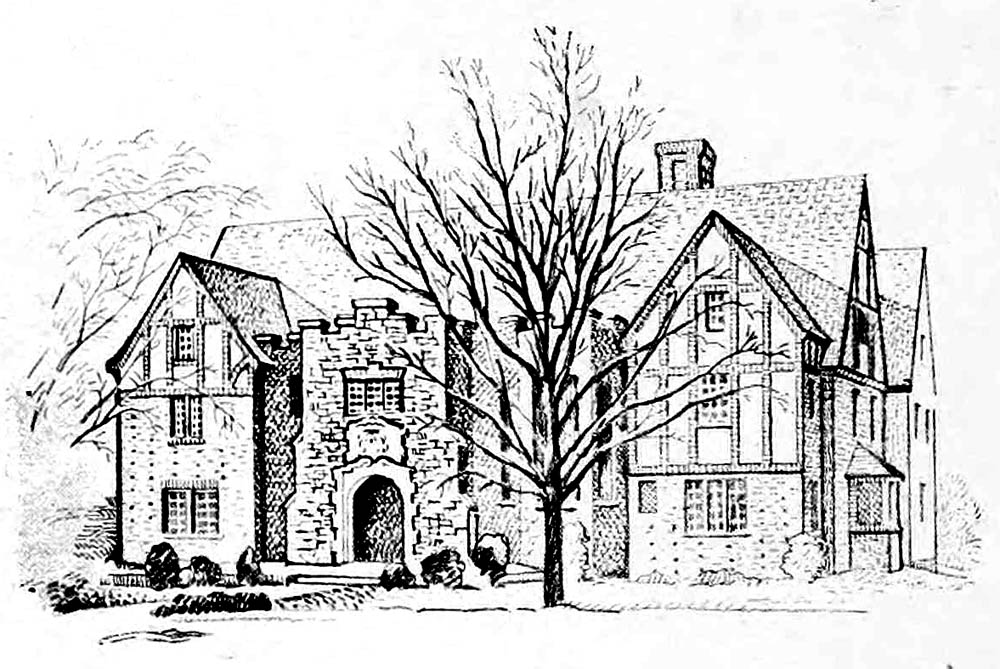 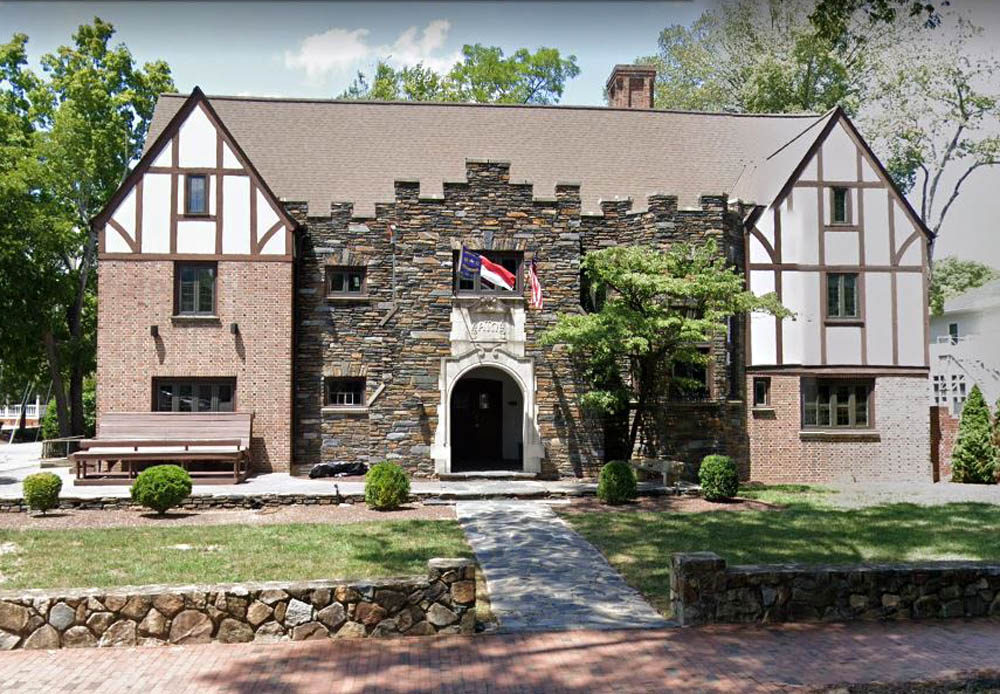 From the National Registry nomination:

"A rare example of the Tudor Revival style in the district, this two-and-a-half-story, steeply pitched side-gabled building was erected as a fraternity house in 1930. The building is five bays wide with a Flemish-bond brick veneer, stone detailing including a stone veneer on the center three bays, and faux half-timbering in the gables. There is a corbelled interior brick chimney and projecting front-gabled bays on each end of the façade. The right (east) gabled bay has brick on the first floor with faux halftimbering on the second floor and in the gable. The left (west) gabled bay has brick on the first and second floors with faux half-timbering only in the gable. The building has replacement eight- and tenlight casement windows throughout with stone windowsills and soldier-course brick lintels except where there is half-timbering above the windows. The center three bays have a crenelated parapet, buttresses with cast-stone shoulders, and small windows with stone lintels and keystones. Double-leaf batten doors are recessed behind an arched cast-stone entry with a cast-stone shield under a broken pediment bearing the name of the fraternity over the entrance. To the right (east) of the entrance, a two-story, stoneveneered projecting bay with tall windows reveals a staircase inside. The side elevations feature brick on the first and second floors with faux half-timbering in the gables. One-story, projecting bays on the left (west) and right elevations have brick veneer and eight-light casement windows separated by turned pilasters. An inset porch at the left rear (northwest) is supported by stone arches and an uncovered slate terrace extends from its left elevation and wraps around the façade to the front entrance. On the rear elevation, a two-story, gabled bay projects from the left rear (northwest) and there is a shed-roofed dormer centered on the rear roofline. A two-story gabled ell at the right rear (northeast) has a two-story bay projecting from its east elevation, and a full-depth, shed-roofed bay on its east elevation, all covered with stucco. Exterior metal fire stairs extend to the windows in the left gable end and the rear of the gabled ell. There is a low stone wall at the sidewalk. The building, designed by C. C. Curtis, was completed in 1930."