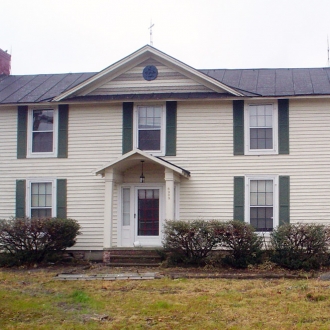 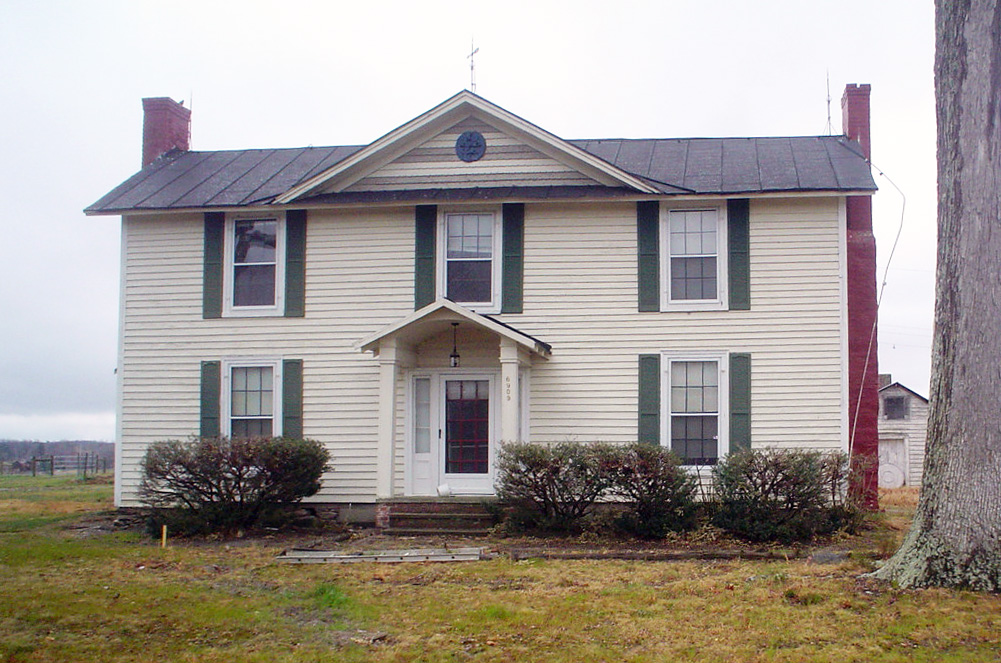 From a combination of land trust press release and the national register listing:

The Captain John S. Pope Farm is, as of 2016, owned by Robert and Gail Pope, and is located on Efland-Cedar Grove Road. A spring-fed tributary flows through the farm and merges with the East Fork Eno River less than 2,000 feet downstream from the property.  The East Fork Eno River flows directly into Lake Orange, a drinking water supply reservoir for the town of Hillsborough.  The farm, currently in organic tobacco production, has remained in continuous operation by the Pope family since at least 1870 and retains the 1874 acreage as well as its historic arrangement of fields and forest. The farmland is located within the Upper Eno protected watershed and has approximately 2,000 feet of stream frontage.

On May 8, 1859, Mary Jane McDade married John Saunders Pope. Born in 1836, Pope was the sixth child of Thomas P. and Mary Wheeley Pope, also listed as farmers in the Northwest Division of Orange County in the 1850 federal census. Shortly after their marriage, on October 6, 1861, Pope enlisted as a private with the North Carolina 31st Infantry Regiment and fought in the Civil War. He had reached the rank of captain when he mustered out of the military on April 26th, 1865, after the surrender at Bennett Place in Durham. Family legend holds that John and Mary Jane Pope began construction of their house shortly after their wedding on land given them by her father, but the construction was interrupted by the war.

When John left for the war, Mary was seven months pregnant; she lived nearby with her father for the duration of the war. The couple legally acquired the land in 1869 when, after his death, John Alphonse McDade’s 183-acre tract of land was divided among his five children with each child receiving approximately 36.6 acres.1 The house was likely still incomplete in 1870, as the federal census lists John S. Pope as a farm laborer living with Mary and their two eldest children (Thomas and Josephine) in Heightown Township, near Prospect Hill, in Caswell County. Mary’s grandfather, William Woods, lived in the Corbett community just west of Prospect Hill and the family was likely living with him until the house on Efland-Cedar Grove Road was completed.

The house was likely complete by 1874. That same year, Mary’s brother Henry Lee McDade transferred his inherited portion of the land to Mary to create an approximately 72.8-acre tract.2 By 1880, the federal census lists John S. Pope as a farmer in Cedar Grove Township in Orange County. Pope is listed with his wife, his three children (Thomas, Josephine, and Carl), and an unrelated African American servant, William Thompson, occupying the property. According to family legend, shortly after the construction of the house, Pope learned that the house had actually been constructed on the west property line, the front of the house resting on a narrow strip of land between the Pope property and Efland-Cedar Grove Road that was owned by David and Mary Wells. An 1879 deed records the transfer of one-half acre of land along Efland-Cedar Grove Road (then Hillsborough Road), and adjoining John Pope’s tract, from Wells to Pope, confirming this belief and creating the distinctly- shaped 73.05-acre parcel that remains today.

The two-story, triple-A-roofed I-house is three bays wide and single-pile with a center-hall plan and a one-story, gabled ell at the left rear (northeast). The house has a stone pier foundation with concrete- block curtain walls. Stone chimneys in each gable end, including the rear ell, have been parged and the chimneys and brick stacks have been painted. The frame house has wood weatherboards, cornerboards, fascia, and a decorative board with beaded edge in the soffit. The low front gable is sheathed with sawn, notched boards and there is an applied wood medallion centered in the gable. The house has a low-pitched, standing seam metal roof with deep eaves. Original six-over-six, wood-sash windows remain with exterior storm windows. Four-over-four, wood-sash windows flank the chimney on the first and second floors of the left (north) gable end. OMB Approval No. 1024-0018

The front door is a fifteen-light French door with three-light-over-one-panel sidelights. The door is sheltered by a one-bay-wide, front-gabled porch with a vaulted ceiling and exposed rafter tails. The porch is supported by square columns on a brick foundation with a concrete-slab porch floor. The current porch is the third porch to be constructed on the house. Historic family photographs show the original porch as a one-bay-wide, hip-roofed porch supported by grouped square posts with diagonal bracing between the posts. A second porch, likely constructed around the turn of the twentieth century and evident in photographs from the late 1920s and early 1930s, was a three-bay-wide, shed-roofed porch supported by turned posts with decorative sawn brackets. The center gable was not part of the original structure and was likely added concurrent with this porch to give the house a Queen Anne design popular at the turn of the twentieth century. The current porch was constructed in the 1930s, perhaps as part of a building campaign in 1931-32 from which the family retains receipts for lumber, roofing, and other building supplies. It appears in photographs as early as 1942.

A one-story, gabled rear ell extends from the northeast corner of the front, two-story section of the house. The ell is frame construction on a stone pier foundation with concrete-block curtain wall. It has a stone chimney with brick stack in the east gable end. The ell has wood weatherboards and a standing- seam metal roof. A two-part c. 1940 addition to the north elevation of the ell was removed in 2002 and 2004 and fiber-cement siding and a 5V metal roof were installed where that addition once abutted the house. The ell has six-over-six, wood-sash windows and two three-light-over-three-panel wood doors open to a shed-roofed porch along the south elevation of the ell. A small c. 1932 addition on the south elevation of the porch was removed in 2007 and the porch, likely enclosed in the 1950s when a bathroom was added in the space, is now enclosed with fiber-cement siding and vinyl windows.

In 2016,  Orange County’s Lands Legacy Program, the NC Agricultural Development and Farmland Preservation Trust Fund (ADFP), the City of Raleigh’s Upper Neuse Clean Water Initiative (UNCWI), and the Eno River Association closed on a “working lands” conservation easement on the 75-acre farm.  The easement serves the dual purpose of protecting prime farmland and protecting the quality of water in streams that flow through and downstream of the farm. As part of the project, Mr. and Mrs. Pope are protecting a forested buffer along the farm ponds and a tributary traversing the property, providing direct benefits to the quality of the water in this stream and the East Fork Eno River.