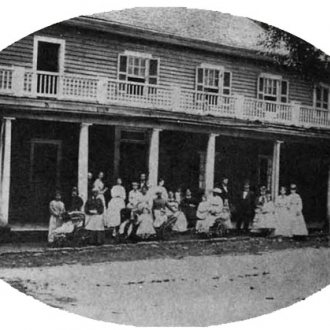 The Colonial Inn was built in 1838 as the Orange Hotel. 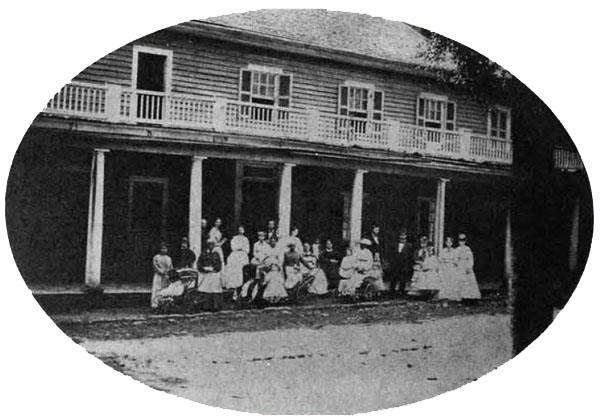 Circa 1870 photograph of the main structure, noted on the photo as "Strayhorn's Hotel"

The structure known today as the Colonial Inn was built on Lot 15 in 1838 as a hotel, and was locally called Spencer's Tavern apparently, but was advertised as the Orange Hotel (a name which lasted into the 1880s). The structure was built for Isaac Spencer, who had purchased the property in late 1837; an ad for the new hotel appeared in the October 18, 1838 Hillsborough Recorder:

The subscriber would respectfully inform the public that this large and commodious establishment, situated on the street leading directly west from the Court House is now open for the reception of travelers and Regular Boarders. Having erected this building especially for a hotel, no expense or pains will be spared to give it character abroad; his customers may thereafter rest assured that his accomodations will be good. 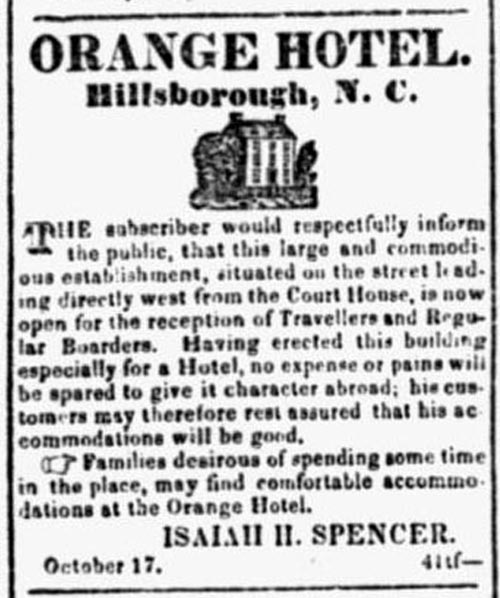 April 1839 ad from the Hillsboro Recorder

In 1841, Richardson Nichols purchased the property from Spencer, and expanded the main structure. In 1856, Nichols sold the structure to the "Hillsborough Improvement Company," which consisted of Alfred, Henry, and Calvin Stroud. The 1860 census for Hillsboro lists Henry C. Stroud as a "Hotel Keeper" with ten boarders (in addition to several laborers and family members) living in his household, and an 1867 ad for the hotel names Alfred P. Stroud as the proprietor of the business (see image below). The Strouds lost the property via bankruptcy in 1868. 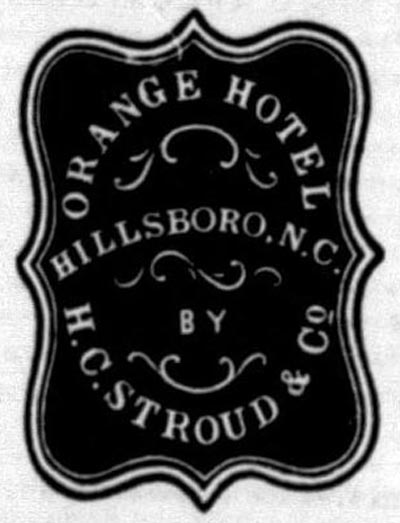 William F. Strayhorn may have purchased or at least managed the business beginning in 1868, and the property was purchased by local businessmen Henry N. Brown and Charles M. Latimer (who was also the county treasurer) in 1870. The 1870 census for Hillsboro lists Strayhorn's occupation as "keeper of boarding house," with five boarders (plus his family) living in his household. Brown and Latimer apparently lost the property through bankruptcy in 1872, with Strayhorn managing or operating the hotel until at least then. (Perhaps related is that Strayhorn had been living in "Twin Chimneys" across the street from the hotel, but lost it due to financial problems in January 1869.)

A "New York investor" may have owned the property for several months until it was purchased by David C. Parks in December 1872. In 1885, Parks sold the property to neighboring property owner Emily Pogue, who sold it back to Parks in 1888. Parks also purchased several other lots to the west and south of Lot 15, and greatly expanded the hotel complex; at this time, it became known as the Occoneechee Hotel, and consisted of five principal structures 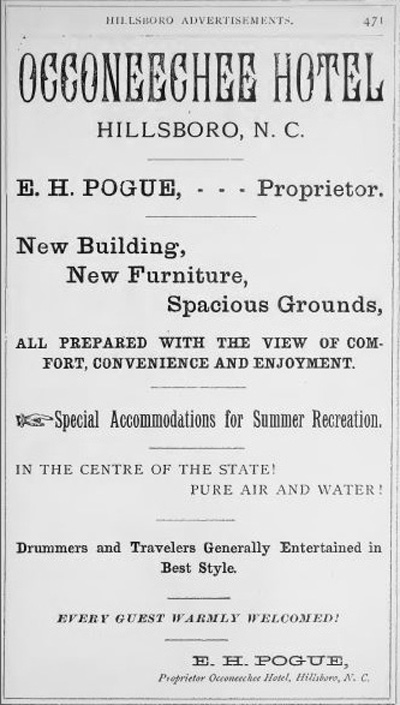 Parks had the hotel complex drastically remodeled and altered, namely by designer Jule Gilmer Korner, a.k.a. Reuben Rink, who was "famous" for his design work for the W.T. Blackwell Tobacco Company and for Julian S. Carr. 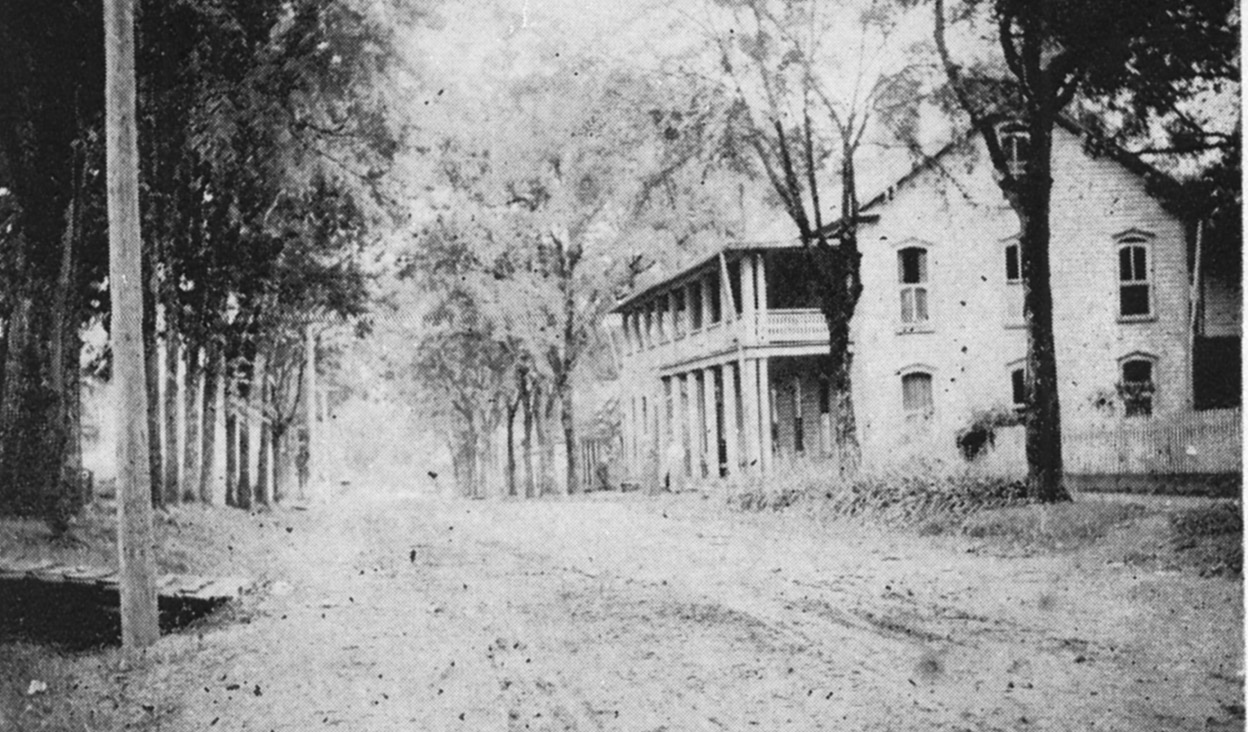 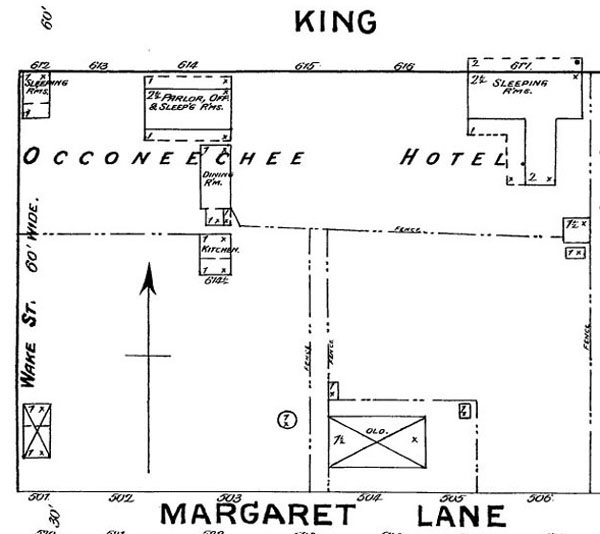 By 1894 (see map below), the hotel property had been "consolidated," and appears to have only consisted of the main structure (on Lot 15), the other structures reverting back to a dwelling and various outbuildings. 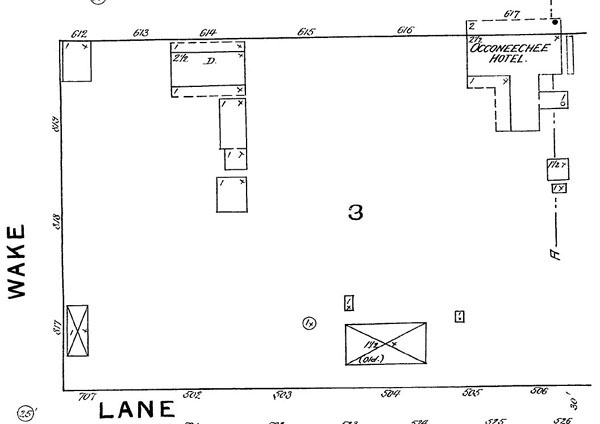 In 1908, Thomas A. Corbin purchased the property and renamed the complex the "Corbinton Inn," after his name and one of Hillsborough's earlier designations (Corbinton/Corbin Town, from the 1760s). Corbin had the structure significantly expanded during his ownership. 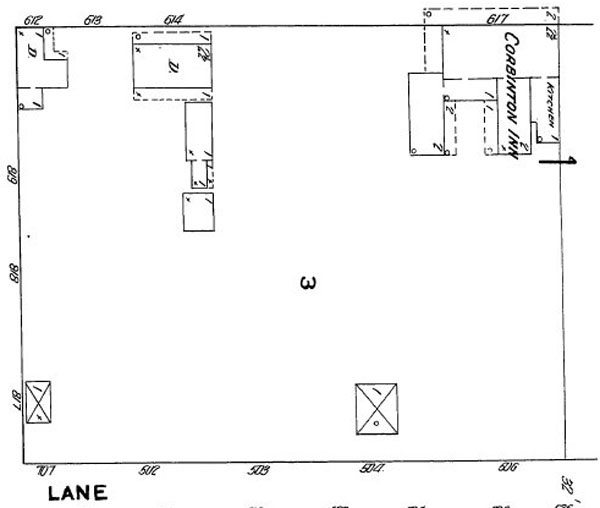 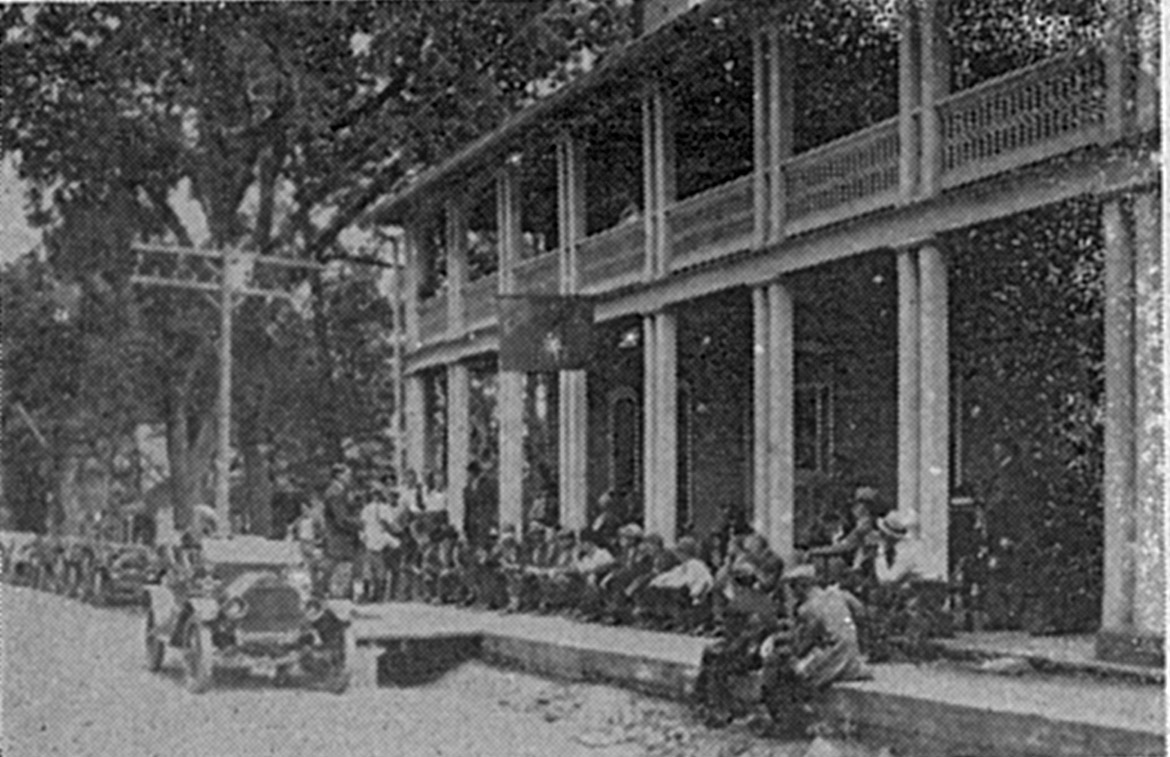 1915 ad (from the Orange County Observer)

In 1921, W.L. Foushee apparently purchased the property from a H. L. Akers, and by 1924 renamed the hotel the "Colonial Inn" (see map excerpt below). 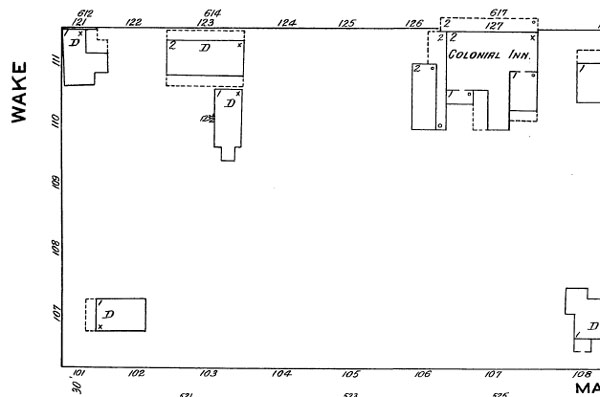 In 1946, Paul Henderson purchased the property from Foushee, and was commended by Hillsborough's residents for renovating the structure, as apparently it had fallen into disrepair. During Henderson's ownership, a "fine-dining" restaurant was added within the hotel structure. The Inn was a popular destination for Sunday dinner. 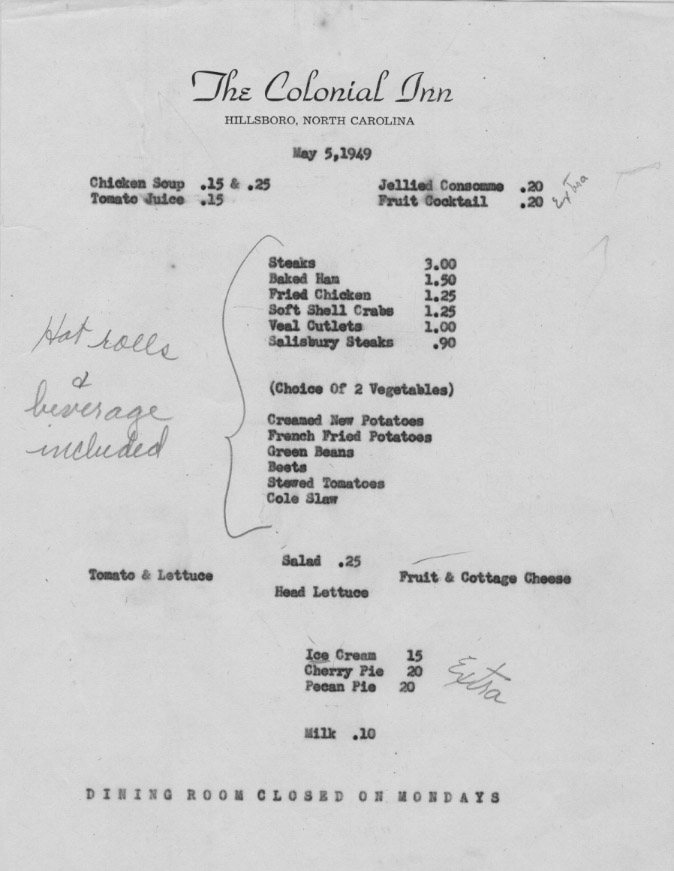 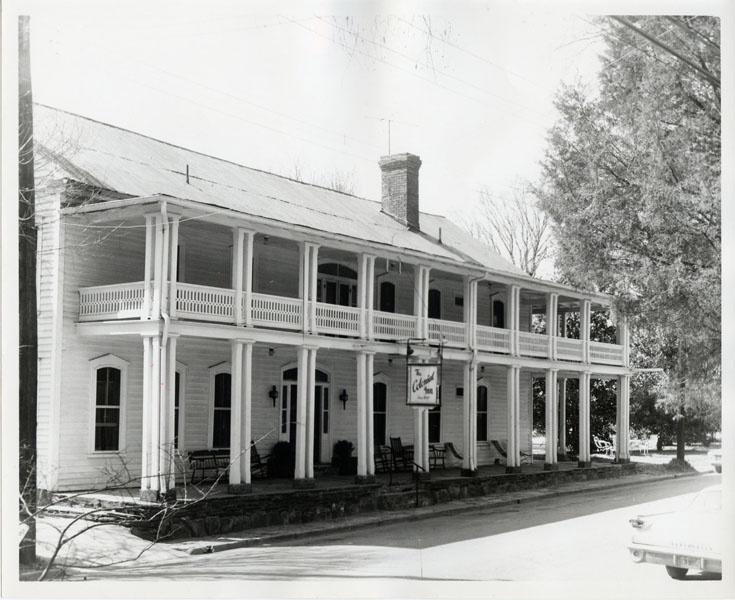 Back in the early days of the 1900s, the Colonial Inn was called the "Occoneechee Hotel." It was well cared for, being in the capable hands of Mrs. Thomas Lynch, aided by various helpers. In spite of the help, however, the chief responsibility fell upon her shoulders, and her days were busy indeed, but Mrs. Lynch did make time to have some flowers on hand.

Back of the hotel, a neat wooden fence furnished the background for a bright bed of flowers, probably zinnias and marigolds. Back of the fence lay a very pretty and well-kept vegetable garden. In the side yard stood a white althea, so large that the little boy who lived there said it was practically a tree. Talking of trees, the giant of them all was a huge mulberry tree, which shaded a large part of the back· yard, furnishing an ideal place for preparing fruits and vegetables in cool comfort and peace.

Along the line of the sidewalk, between the Parks-Richmond House and the hotel itself, there stood then, and stands now, a mass of day lilies, brightening up the walk on July and August days.

Cool shade, bright flowers, comfortable chairs, and good food, these were the special pleasures of the 'drummers' and traveling salesmen, who came on the train and 'put up' at the hotel. Before and after supper, the big rocking chairs lined up on the front porch were soon occupied by the drummers and some of the guests of the hotel, who joined in the conversation, the jokes, the laughter, and the fun. These were pleasant days and pleasant company. 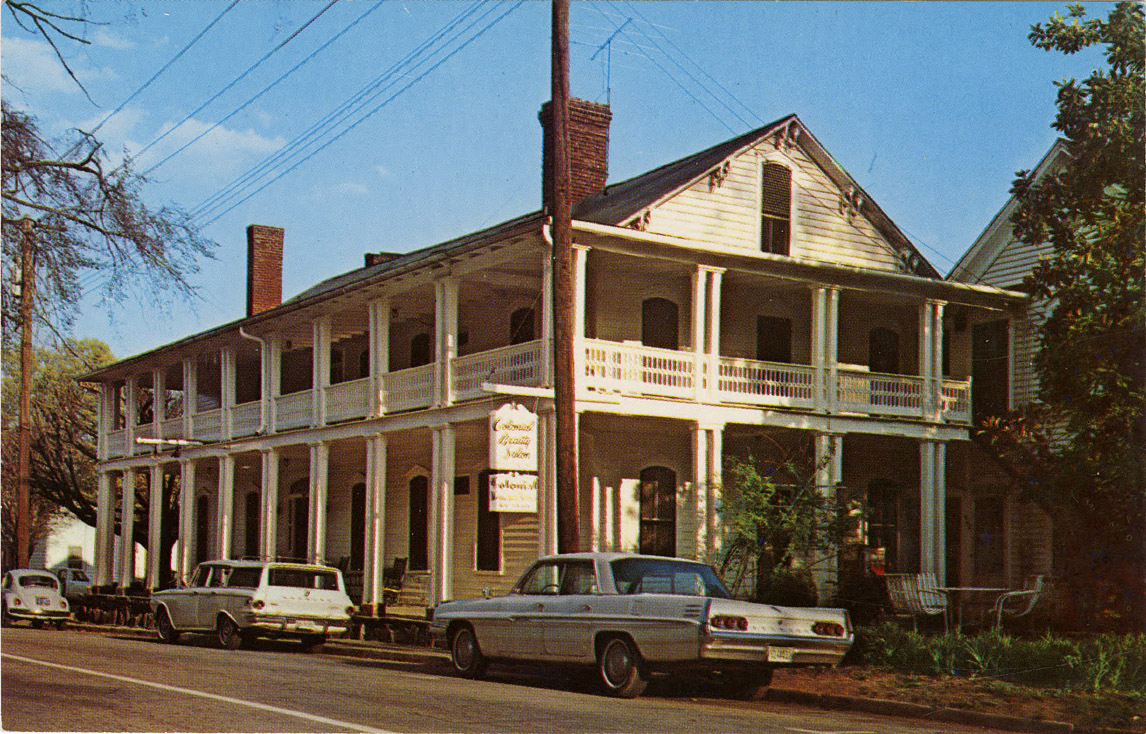 The Inn closed for business in 2001. In 2003, the Colonial Inn was sold at auction and purchased by Francis Henry of Chapel Hill. Henry had abused a previous historic property in Chapel Hill, resulting in eventual demolition, and has stayed true to form with his treatment of the Colonial Inn. Along with consistent neglect, Henry has burned trash in the fireplaces, which seems bizarre unless he somehow hoped the property would burn down.

After 12 years of frustrating back and forth with Henry, the Town of Hillsborough voted to begin eminent domain proceedings in March of 2016. There is little news as to the status of the process, although someone put a new metal roof on the structure in May of 2016. 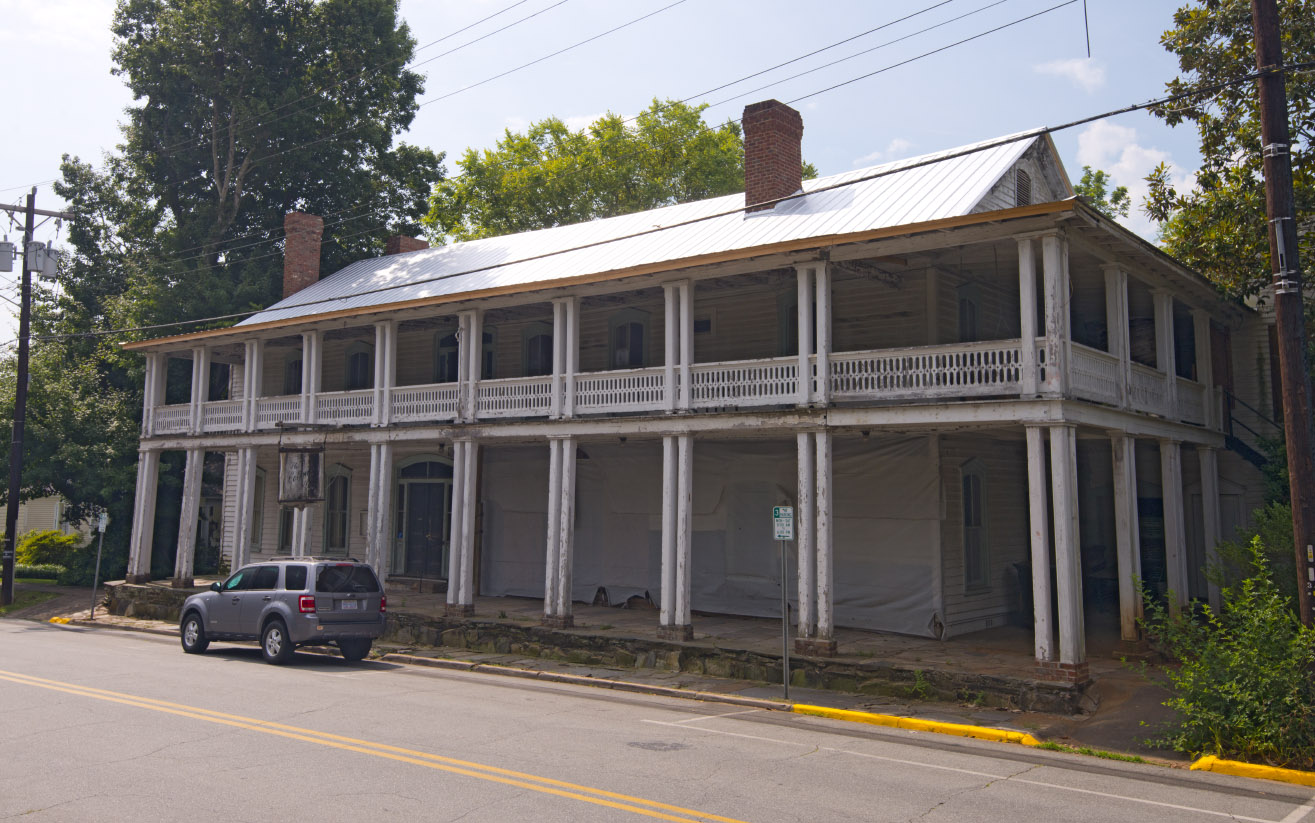 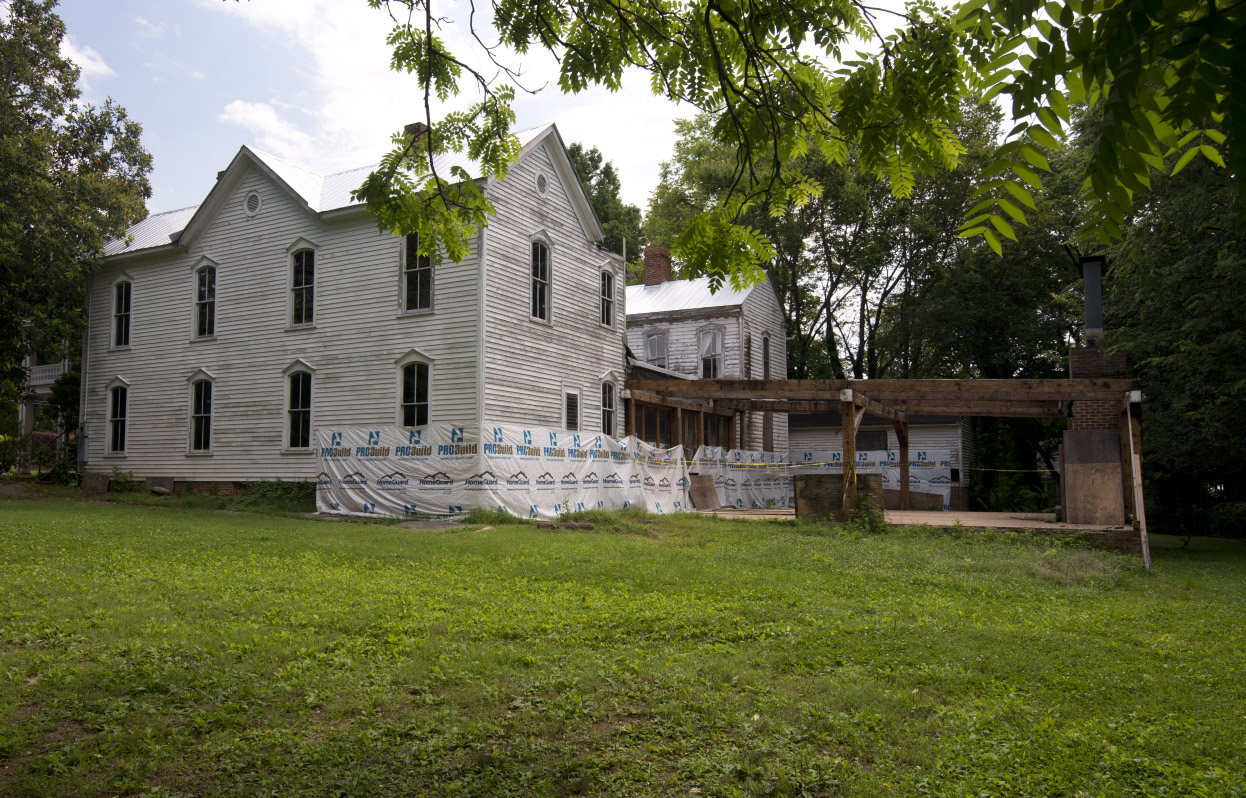 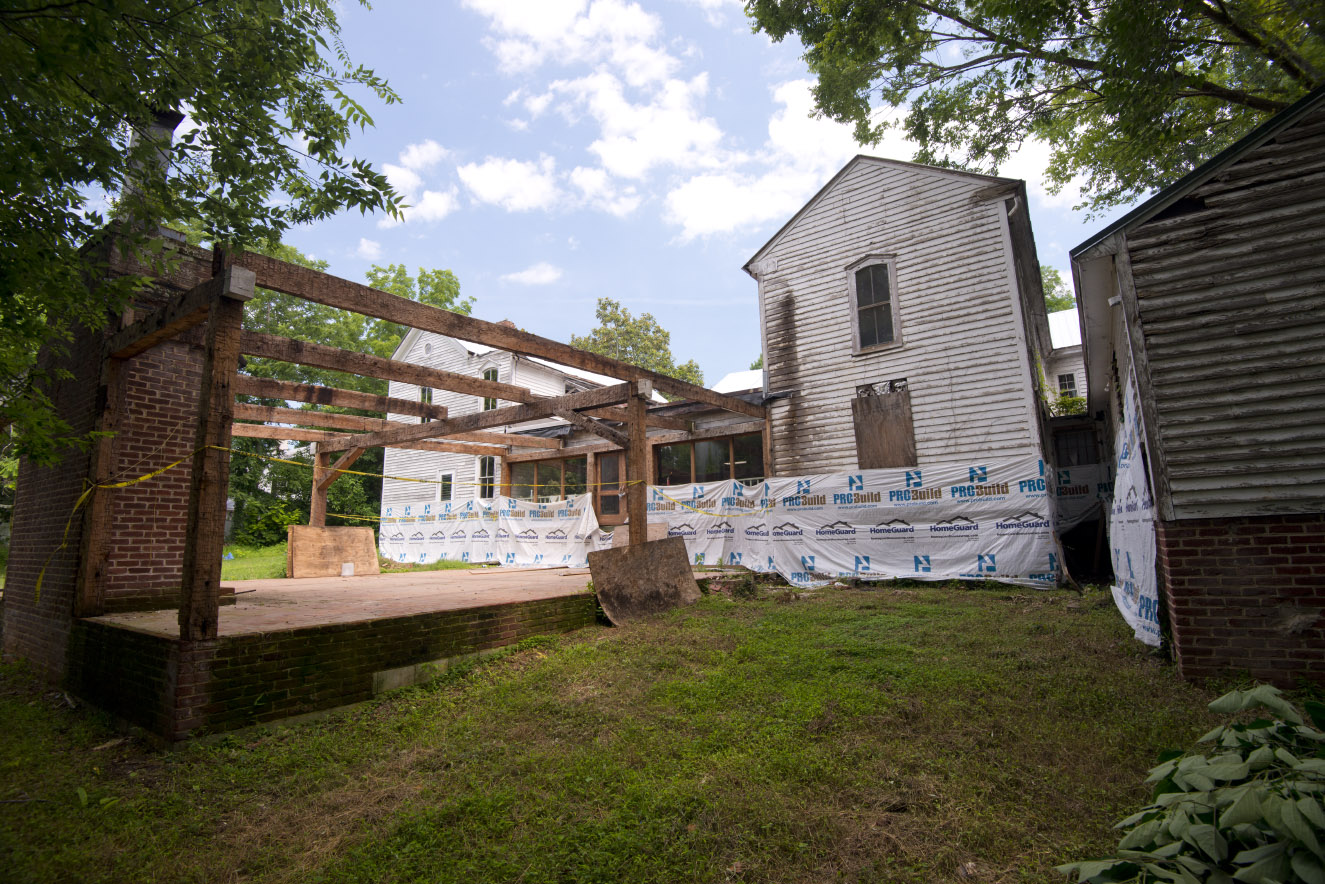 On July 28, 2016, the Town announced that they had filed an action in Orange County Superior Court to begin legal proceedings to acquire the Colonial Inn by eminent domain. The Town placed a deposit of $250,000 with the Orange County Clerk of Court, which appraisers hired by the court determined to be the fair market value of the property.

On May 10, 2017, the Town announced they had agreed to withdraw the Eminent Domain filing in order to give Henry a year to sell the property. To me, this is an inexpicable decision, as Henry has had years to sell the property - allowing it to be damaged and deteriorate further while he likely engages in some shenanigan like selling it to his brother would be a terrible path. I'm not sure if there's more to the story, but it feels like the Town bought into the b.s.

Fortunately, the building sold in January 2018; Allied DevCorp. LLC paid $800,000 for the property. Per the Durham paper, the new owners plan to operate the inn as a boutique hotel with a restaurant, bar and small event space. Here's hoping that it works out. 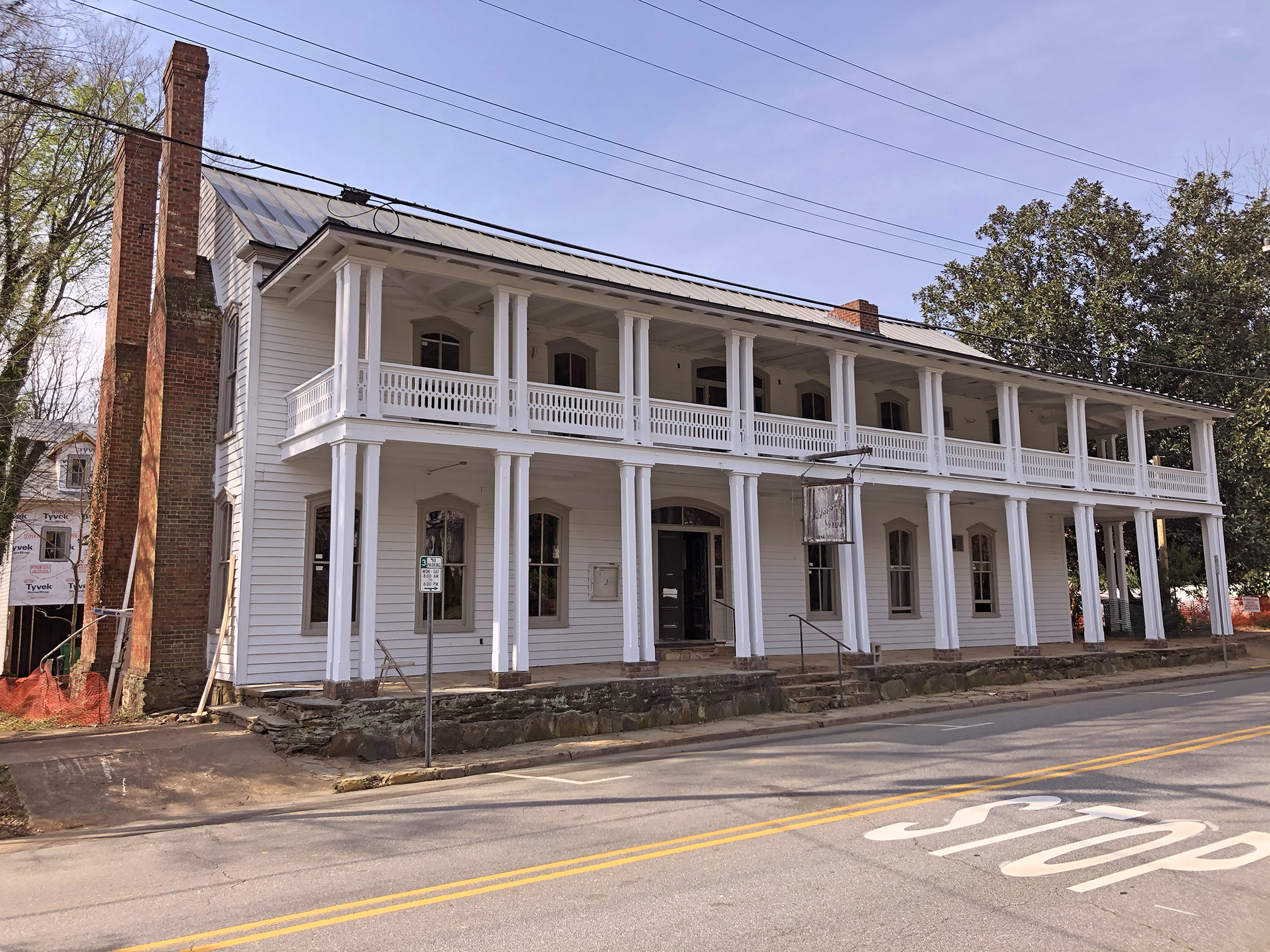 The "timbers" shown at the

The "timbers" shown at the rear rear of the structure in the last two photos were from a (cotton?) mill in Danville. James Freeland brought a bunch of them to Hillsborough and used them in various structures. A storage pile of them can be found at the old Daniel Boone Ampitheatre.

A newspaper photo from Nick