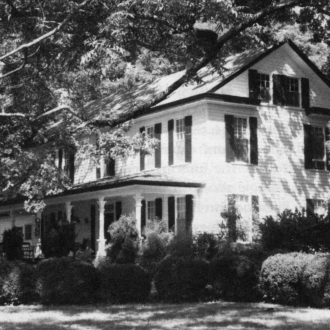 In 1844, the construction of Highlands was begun by James H. Norwood, who built the two west rooms of squared logs, to serve as a school. Two years later, Mr. Norwood moved to Asheville, and the property was purchased by Andrew Mickle, who added the piazza and one room to the east, with two rooms above. 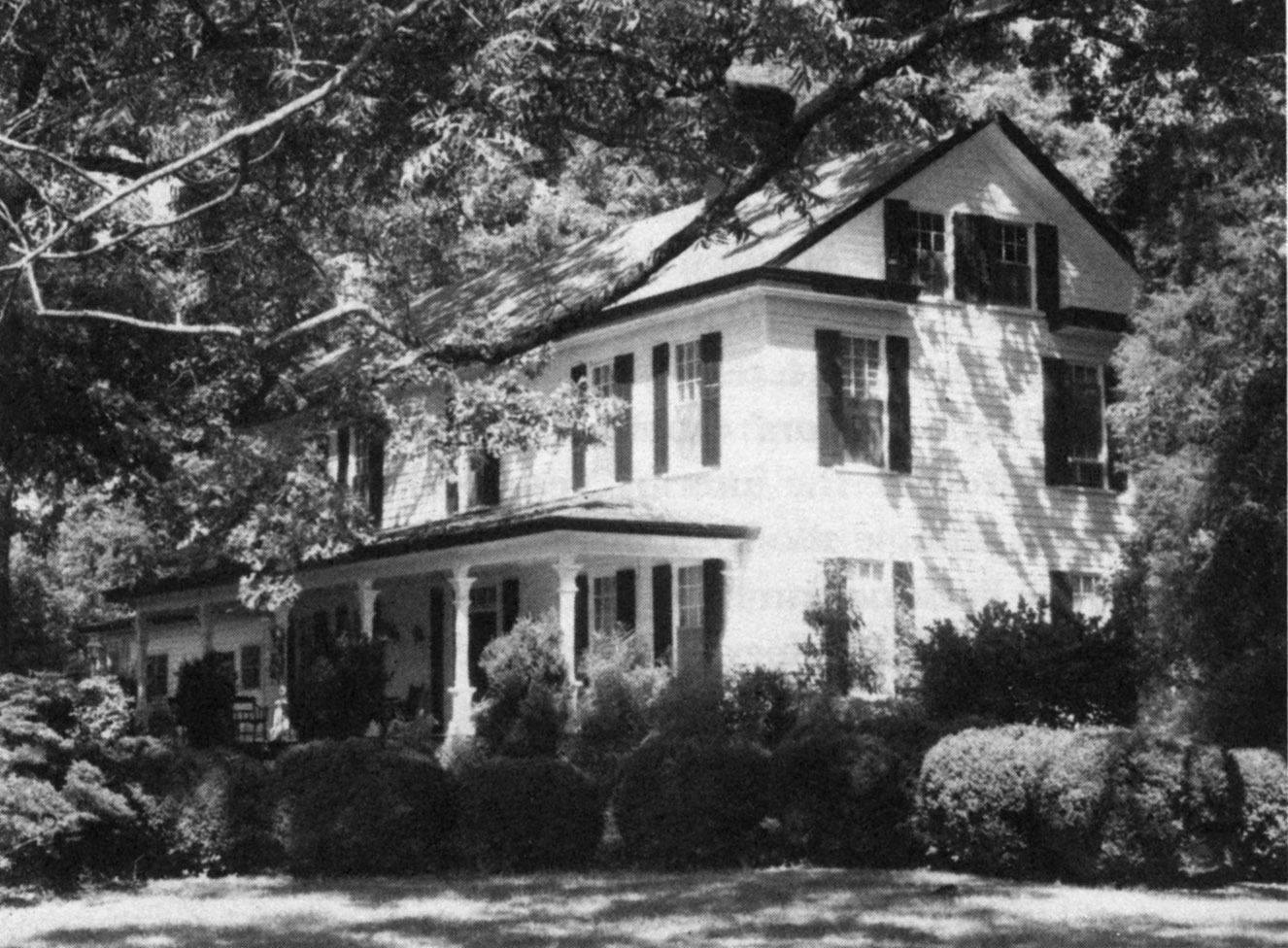 Highlands, before 1989. (From the Pelican Guide by Lucile Dula; picture by Quentin Patterson)

Set back from US 70A and facing south, away from the road, this large house dates from the mid-nineteenth century. Constructed in three phases, the two-story, side-gabled house is currently five bays wide and double-pile with a one-and-a-half-story, side-gabled wing on the left (west) elevation. The house has vinyl siding, nine-over-nine wood-sash windows, six-over-six windows in the gables, and two interior brick chimneys. The double-leaf one-light-over-two-panel door has four-light-over- one-panel sidelights and a three-light transom. It is sheltered by a hip-roofed porch that extends nearly the full width of the two-story section and is supported by chamfered posts. The rear (north) elevation matches the façade, but has an exterior brick chimney and a narrower shed-roofed porch supported by chamfered posts that has been enclosed with screens. The one-and-a-half-story wing has nine-over-nine windows on the first-floor with six-light awning windows at the second-floor level. There is an interior brick chimney and a projecting hip-roofed bay window on the rear elevation. A hip-roofed porch on the façade has been enclosed and has metal double-hung windows. The left bay of the porch remains open, supported by a chamfered post. A low stone wall extends along the circular driveway south of the house.

The one-and-a-half-story section on the left is of log construction and was erected as a school around 1844. The school was converted to a residence and a three-bay-wide, two-story, side-hall section was added by Andrew Mickle in 1846. In 1857, Paul C. Cameron added two additional bays, resulting in the center-hall plan that exists today. The house was used by the Confederate Army for a short time at the end of the Civil War. When Cameron died in 1875, the property was passed to his grandson, Paul Cameron Collins. A wellhouse and reflecting pond likely date from Paul Cameron’s occupancy, while other outbuildings appear to have been constructed in the twentieth-century.

Highlands - Miss Elizabeth Collins' Home: In the autumn of 1844, the construction of Highlands was begun by James H. Norwood, who built the two west rooms of squared logs, to serve as a school. Two years later, Mr. Norwood moved to Asheville, and the property was purchased by Andrew Mickle, who added the piazza and one room to the east, with two rooms above. Mr. Duncan McNair was the third owner. Mrs. McNair was a sister of Bishop Joseph Blount Cheshire, who was an ardent horticulturist and often visited them. It is thought that he may have advised them in the development of the garden. Mr, and Mrs. McNair lived at Highlands for several years, and then Paul C. Cameron became the owner, and the property was rented to Mrs. Betty Thompson of Edenton, a refugee and sister of General G. B. Anderson.

In April 1865, after the surrender of General Joseph E. Johnston to General Sherman at Bennett's Place, General Robert H. Anderson's Brigade of Cavalry remained for the protection of the people from stragglers, with headquarters in James Webb's lot across from the mineral spring.

On the aftrenoon of May third, several officers came from Raleigh to receive the paroles of this Brigade. On the following day, the wind rose to such an extent that it was impossible to handle papers out of doors, and permission was granted by Mr. Cameron to use his house, vacant at that time. In the dining room, almost the last of the Confederate officers to surrender signed their paroles.

In 1877, the remaining rooms of the house were added, and Mr. Cameron's daughter, Mrs. George P. Collins and her family took possession.

The appealing old green shuttered white frame house stands in five acres of green lawns and box gardens. Mrs. Paul Collins was an ardent gardener who did much to develop the grounds between 1915 and 1920. There are many interesting trees, including a Japanese Chestnut and a Scaly-barked Hickory planted about 1890 by Mr. Paul Collins, a large Deodar and a Star Magnolia, brought about fifty years ago from Fayetteville. It is now twenty feet high, a delight of the spring garden. The white and purple Desmodiums are of interest, as typical of early Hillsborough plantings. The formal gardens are outlined in English box and Liriope.