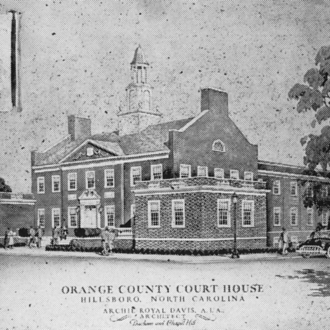 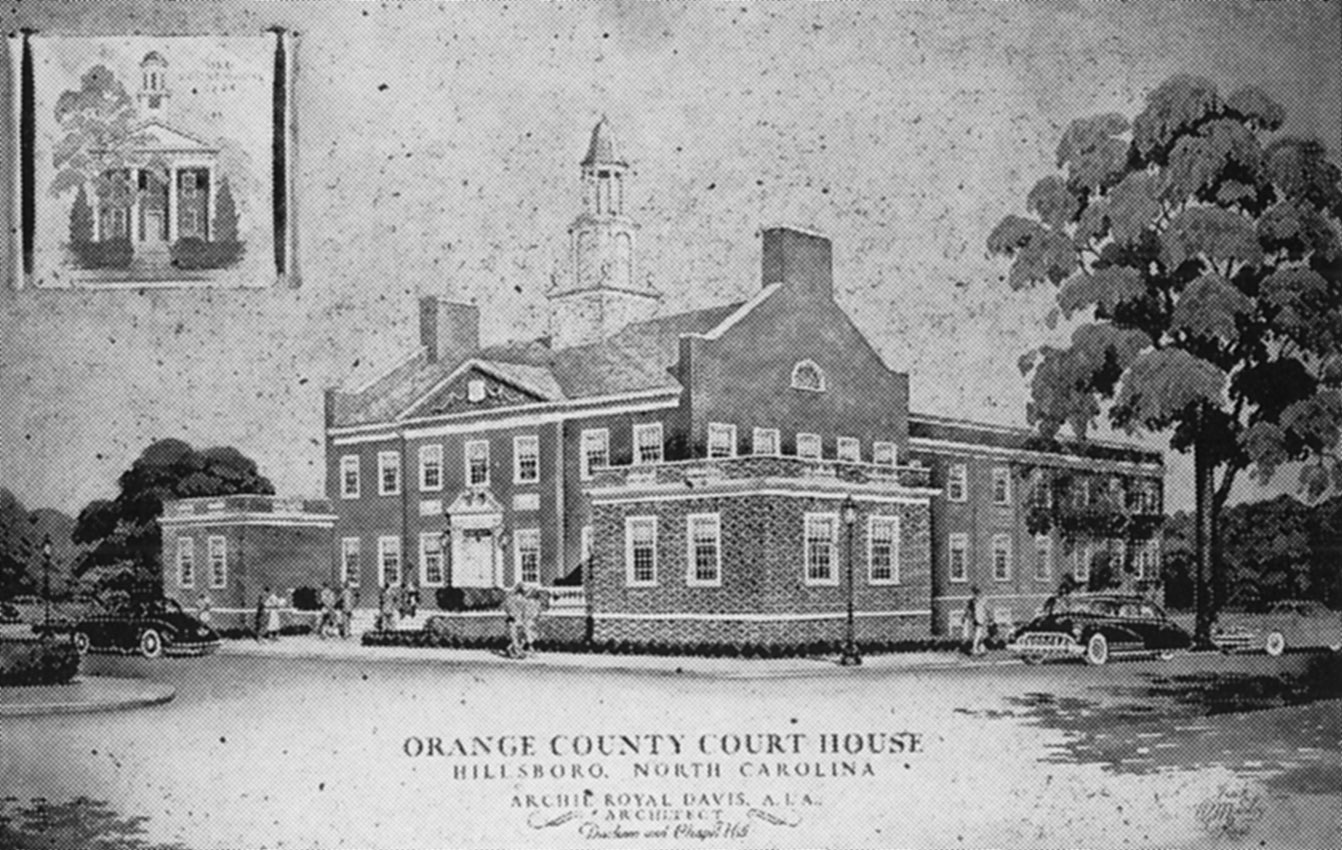 Rendering of New Courthouse (History of the Town of Hillsborough)

Prior to construction of the courthouse, the Webb Warehouse stood at this location (the northwest corner of S. Churton and E. Margaret.) It served as a storage facility for the nearby Webb Tobacco Co. 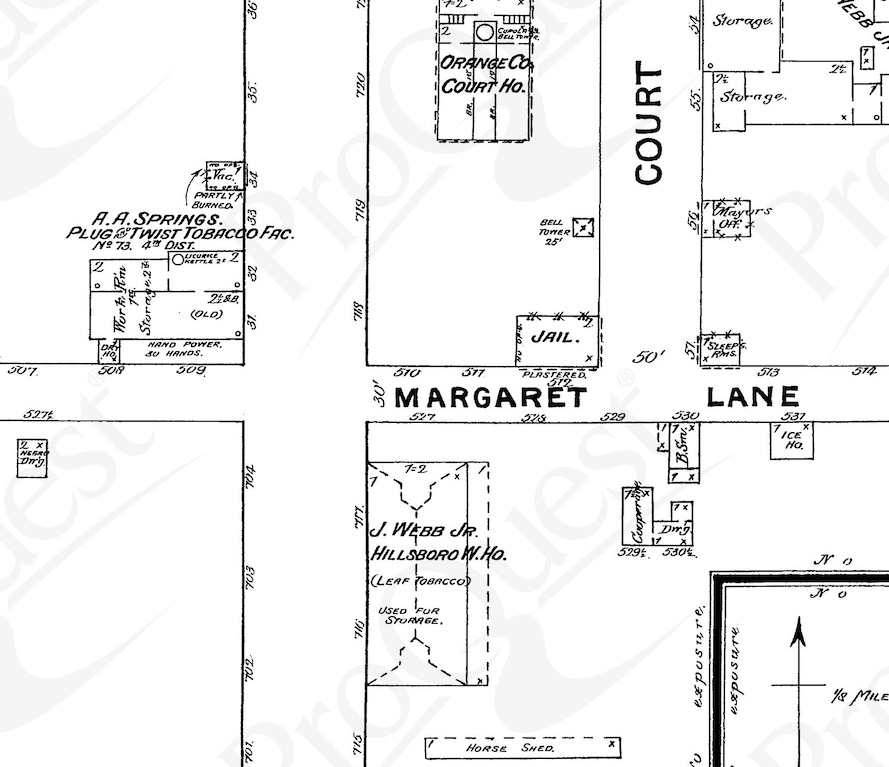 The warehouse became generic storage after the Webb Co. left downtown Hillsborough, and, in its final iteration, a garage and repair shop for Orange County. 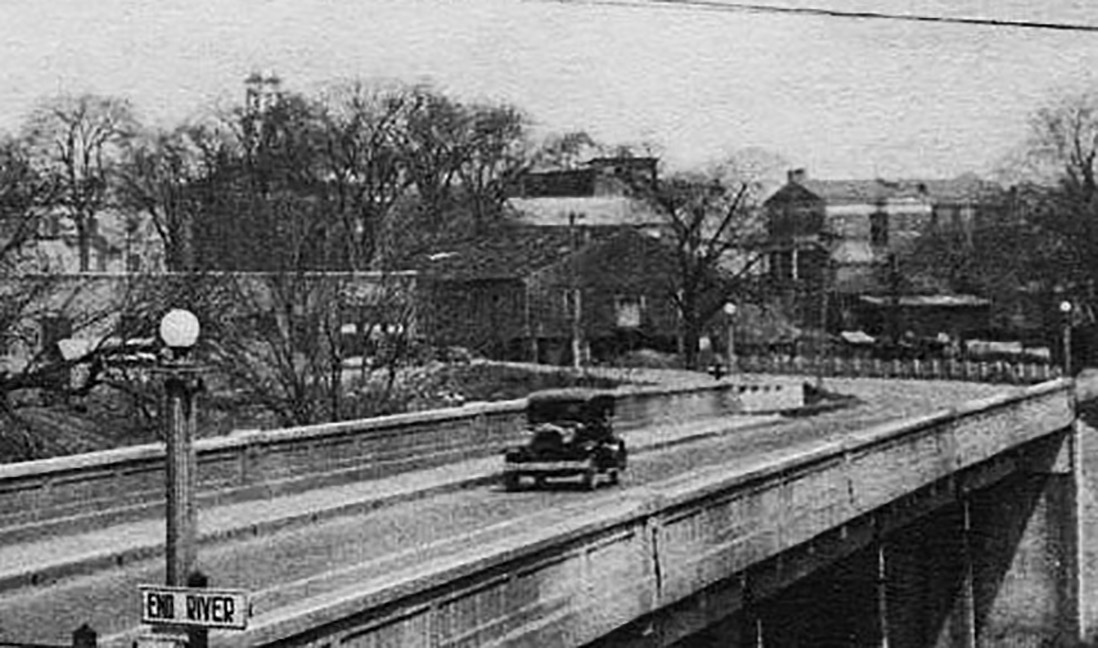 Old Webb warehouse - back of the building (large gable end) is visible at the center of the picture. (UNC postcard collection) 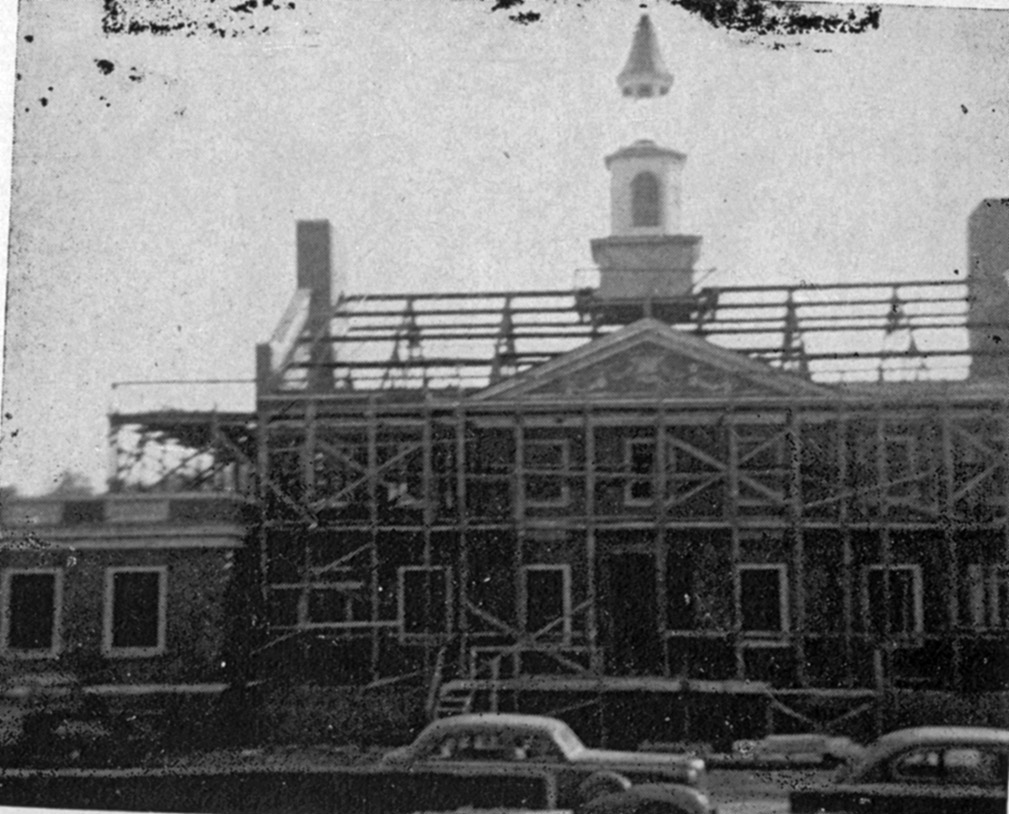 New courthouse under construction, 1953 (History of the Town of Hillsborough)

Architect Archie Royal Davis, AIA, of Chapel Hill and Durham, designed this two-story, side-gabled, Colonial Revival-style building with Beaux Arts detailing. The seven-bay-wide main block has a Flemish-bond brick exterior and parapeted gables with interior end chimneys. A three-bay-wide gable pavilion projects from the center of the façade; its pediment contains a modillion cornice and a shield and swag motif, the swag duplicated in plaques on the façade between the first- and second-floor windows. The recessed central entrance is a double-leaf three-panel door with a leaded-glass transom in an inset, paneled bay. The bay has a classical surround with Corinthian columns supporting an entablature with modillions and a broken swans-neck pediment. It is accessed by an uncovered brick and concrete terrace with a brick knee wall and cast-stone balustrade at the sides. The building has eight-over-twelve wood-sash windows on the first floor, eight-over- eight windows on the second floor, all with flat brick arches, molded surrounds, and wood windowsills. A three-stage cupola with a copper roof is centered on the roofline. One-story, flat-roofed brick wings, each two bays wide, flank the main section and feature brick parapets with stone balustrades at the roofline. A two-story, flat-roofed wing extends from the center of the rear (south) elevation; it is eight bays deep with brick pilasters between the bays and has windows matching those on the main section. A one-story hyphen at the south end of the wing connects to a one-story, parapet-roofed brick section with eight-over-twelve wood- sash windows. A two-story, flat-roofed wing at the left rear (southeast) corner of the building has a parapet roof with a wide brick beltcourse near the parapet, stone detailing, and connects to a one-story, hip-roofed addition just east of the main building. The large, two-story-with-basement, hip-roofed building to the east of the courthouse is five bays wide and seven bays deep with five gabled dormers on the east elevation. The center three bays of the façade (north) and left (east) elevations project slightly with a parapet roof with wide cornice and two cast-stone beltcourses each. Entrances at the basement level of the east elevation are sheltered by a hip-roofed metal porch that extends around the projecting bay and is supported by Tuscan columns on low brick piers. The main building was constructed between 1953 and 1954 just south of the 1845 courthouse. The subsequent additions have overwhelmed the 1950s building, rendering it non-contributing. 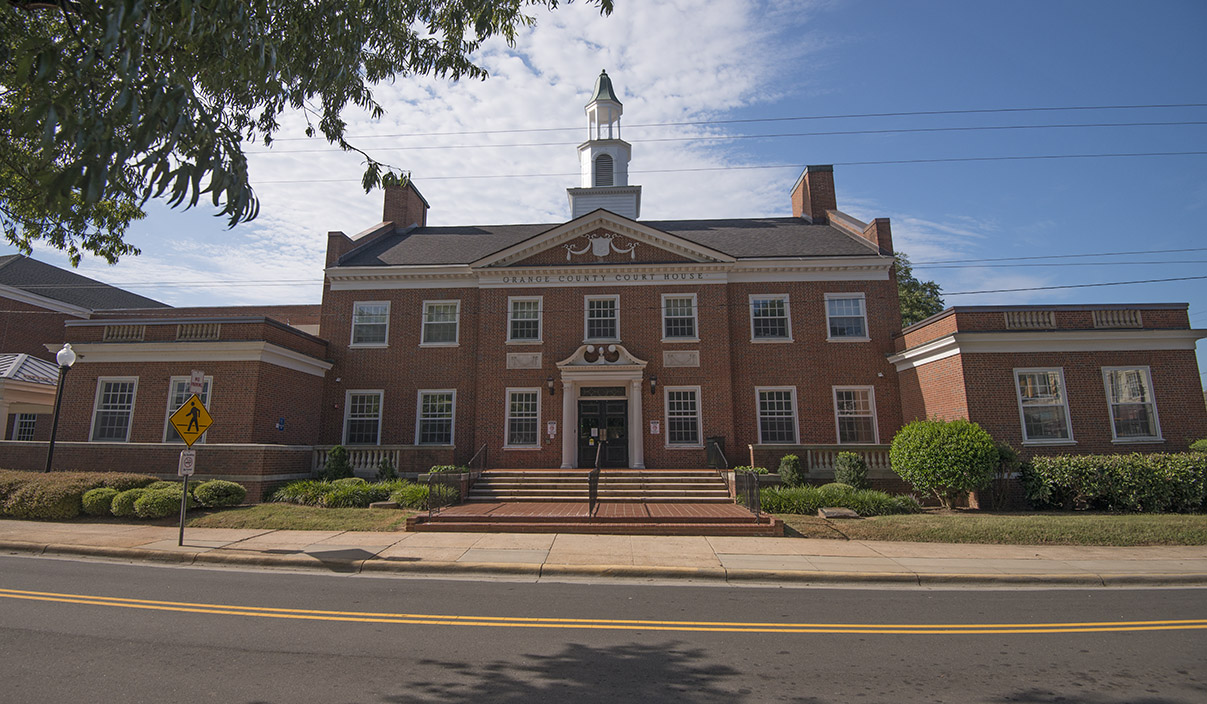 Non-contributing, so we should really just tear down this courthouse, as it has no historical architectural value to downtown Hillsborough? As you can certainly tell in my picture above, the historic building is "overwhelmed to the point of being unrecognizable." I can't even tell it is a building vs. a giant pile of bricks.