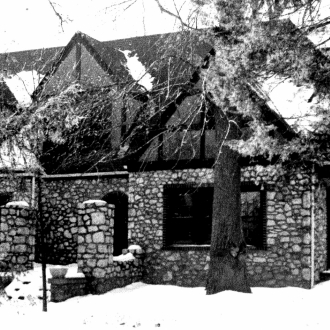 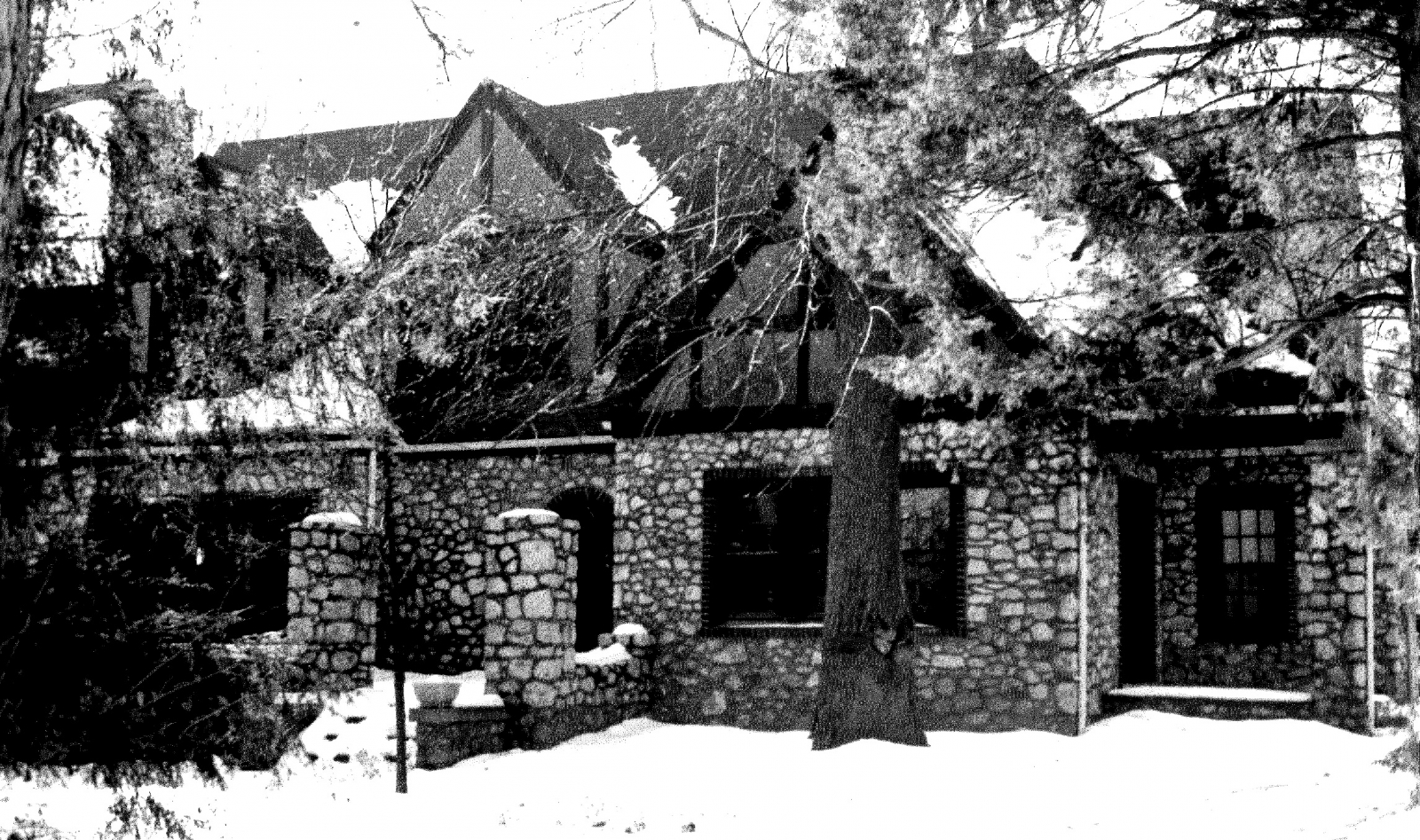 The Rock, House is a sprawling, one and one half story, roughly rectangular dwelling with a front terrace and three original porches on the side and rear elevations A deep hip roof crowns the rock first story. The exterior of the house is constructed of white flint rubble rock wall cladding with rope or grape-vine mortar. The steeply pitched roof has front and rear gabled dormers and large cross gables. All gables and dormers have decorative half timbering of wood and stucco. The white flint rubble rock stack of the interior chimney extends above the roof line on the east end of the house. The wooden six over six window sashes are placed singly and in groups of two and three in brick sills and frames. Originally, a rock arch led onto the front terrace. The columns remain but for safety reasons the arch was removed a number of years ago. A low white flint rubble rock wall surrounds the front terrace which is floored in a gray slate known locally as "Duke Stone." Two white flint rubble rock columns support the side gabled roof of the porch on the east side of the house. A smaller porch extends off the west side of the house and a screened porch off the rear elevation. The arched, wooden front door has two vertical panels topped by five panes of glass, stacked two over three. The door opens into an entrance hall, with a living room to the left side and a parlor to the right. Two of the five bedrooms are on the first floor, the other three upstairs. The interior of the house retains the original oak tongue and groove flooring, window and door surrounds, textured wall plaster, doors and door hardware. The house's only fireplace is in the living room, is constructed of white flint rubble rock. The original marble mantel shelf was replaced during an unknown period with a thick, varnished wooden slab mantel. The dirt floored basement contains the original furnace (inoperative) and the currently used modern heat pump. The house and surrounding outbuildings, with the exception of the garage, retain a high degree of architectural integrity, having undergone only one major refurbishing in 1986-87. This refurbishing carefully restored the original fabric of the house with only the following minor alterations. Several interior walls in the kitchen-breakfast room area of the rear were removed and the area converted into one large eat-in kitchen. Two new upstairs bathrooms were constructed out of a dressing room/bathroom and storage space in the rear gable, and a small upstairs bedroom was expanded utilizing storage space in the front gable. A closet was added to the upstairs master bedroom utilizing space in the steeply gabled roof.

Very little factual information is known about Mack Rigsbee but local stories of his notoriety abound even today. According to local lore Rigsbee was a Prohibition bootlegger who styled himself as a "gentleman farmer." He was alleged to have used the many storage areas created by his house's steeply pitched roof and dormers to hide the moonshine some say he distilled in the downstairs bathroom. The construction of the Rock House provides possible corroboration for the legend. The current owners found that the downstairs bathroom had a reinforced floor and an oversized drain in the bathtub. The upstairs bedroom and bathroom walls end far from the roof eaves, leaving oversized storage areas beneath the steeply pitched hip roof. One of the faucets in the upstairs sink was fed by its own tank concealed in the eaves of the roof. Some have speculated that Rigsbee and his guests had only to turn the appropriate faucet to fill their glasses with illegal libation. Another tale recalls a tunnel from the basement to the garage so liquor could be smuggled in and out of the house without being seen. Clarence Jones, a local historian who knew Mack Rigsbee, remembers the bootlegger as a short dapper man who wore kid gloves, drove a new Model A every year, dressed his wife in finery and was a wholesaler-distributor of illegal whiskey, known locally as East Lake Rye. (Charlotte Observer, 26 January 1987.)

The Rigsbees defaulted on their mortgage in 1931 (Orange County Deed Book 96, page 200). Since then the house has had a succession of owners. The [owners in 1988] purchased the property in June, 1986 and immediately began renovations to the house which had been neglected through the years. 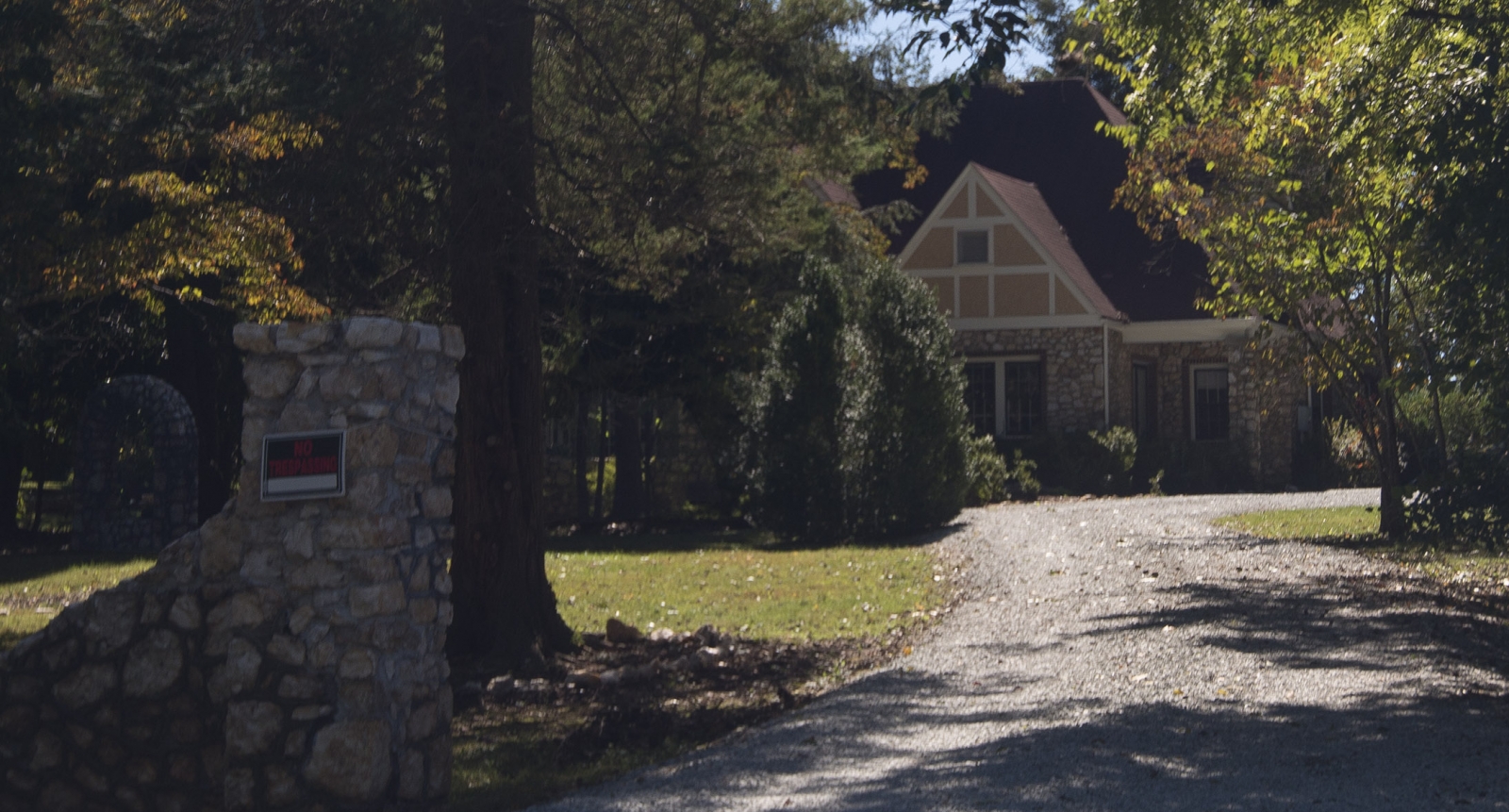