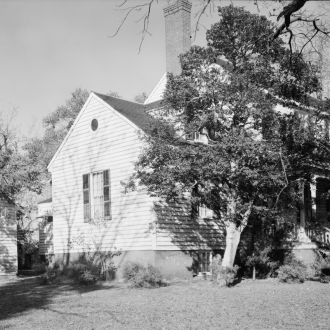 A c. 1813 house built by William Cain (also of Hardscrabble) and renovated by John Berry in 1857. 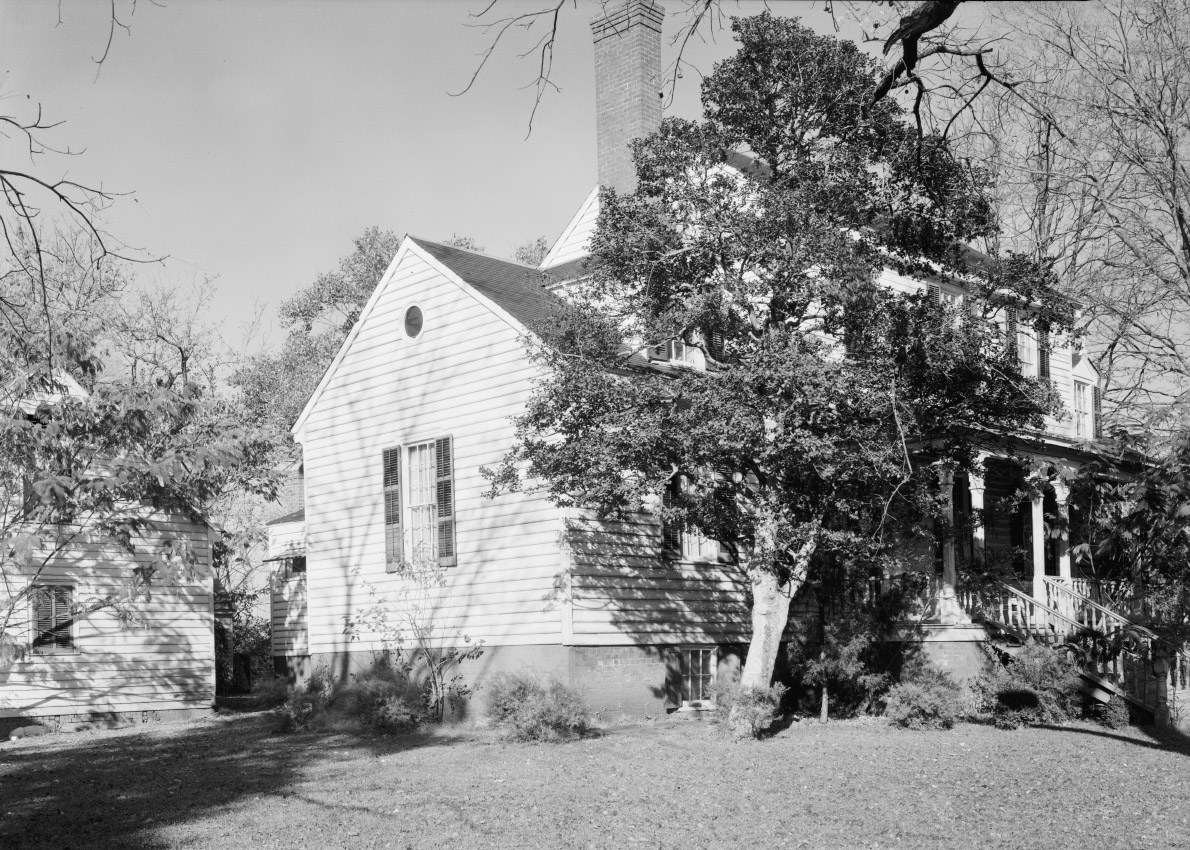 Carnegie Survey of the Architecture of the South (Library of Congress), 1938

From the National Register Nomination"

One of the most elegantly finished Federal style houses in Hillsborough, Sans Souci faces Caine Street to the south but has an East Corbin Street address. The main two-story block is three bays wide and has a side- hall plan. Federal details include a raised basement with Flemish-bond brick, molded weatherboards, and nine- over-nine wood-sash windows with molded surrounds and wide sills. The double-leaf three-panel front door has a five-light transom and is sheltered by a full-width hip-roofed porch supported by square decorative posts and turned balustrade, similar to that at Burnside. The house was enlarged in the mid-nineteenth century with a one- story gabled wing on the left (west) elevation, a one-and-a-half-story gabled wing on the right (east) elevation, and a one-and-a-half-story, shed-roofed wing across the rear (north), all with gabled dormers. The wings have nine-over-nine wood-sash windows on the first-floor level and six-over-six windows in the dormers. The right wing has twelve-over-twelve wood-sash windows in the gable end with six-over-six windows flanking the chimneystack on the east elevation. A basement-level entrance on the east elevation is sheltered by a small shed roof. An entrance on the rear elevation is accessed by an uncovered stair with a Chippendale-style railing. One exterior end chimney stands on the west side of the main block, one stands on the east end of the east wing, and one interior chimney stands between the main block and rear shed addition. There are boxed eaves (except on the dormers) and flush gable ends throughout, brackets at the sides of the front dormers, and operable wood shutters at most of the windows.

The original acreage of Sans Souci was owned by James Hogg and then passed through several owners. Although no registration of title is available, Dr. William Cain evidently built the house circa 1813 for his bride Mary Ruffin. Dr. William Cain’s country house, Hardscrabble, still stands near Hillsborough. The original tract consisted of 30 acres. Dr. Pride Jones, who inherited the estate from Dr. William Cain in 1857, was responsible for the extensive renovations performed by John Berry.

The central block is largely unaltered, with fine early finish. The entrance hall and parlor have elegant mantels with raised paneled overmantels and raised panel wainscot. The dining room has plain wainscot. Interior doors are either six raised panels or five horizontal panel doors. A transom is seen over one of the upstairs doors. The west upstairs bedroom is wallpapered with a blue and white pattern dating from the 1860s.

According to Mrs. Engstrom, local builder John Berry added the rear dining room, rear stairwell, full- width front porch and front 1-story wings in the mid-19th century. The simple Federal style rear staircase, similar to the stairs at the Ruffin-Roulhac house, is characteristic of Berry. Sans Souci is fortunate to have retained many of its outbuildings, including an office, kitchen, and servant’s quarters.

Charming Sans Souci, built about 1801 by William Cain and his wife, Mary, a sister of Thomas Ruffin, stands on a high spot overlooking the town and surrounding countryside. Of typical Colonial North Carolina architecture, it has a high flight of steps leading to the entrance doorway. At the left of the house stands the old kitchen with its enormous chimney. At the time the first floor bedroom wa added, a tree trunk was used to make a stud for the northeast corner. Much beautiful detail in wainscoting and mantles is found throughout the interior of Sans Souci.

The garden is of interest for its magnificent beeches, hack berries, .cucumber trees, and a large Kentucky Coffee Tree. There is a typical shrubbery of Tree Box, oak leaf hydrangea, and Japonica, and a fine James Grape arbor. The only flowers originally planted bordered the front walk, which was edged with white stones. These were Jacob's Ladder, old purple iris, peonies, white daffodils, snowdrops, and masses of lily-of-the valley. Traces of these plantings can still be seen along the woodland path, which replaced the original walkway.

The Cain family divided its time between the country plantation, "Hard Scrabble," and the Hillsborough home, "Sans Souci," the names representing the difference between life in these two spots. William Cain, Sr. eventually retired to his country plantation, while his son, Dr. William Cain, continued to live at Sans Souci, until his death in 1857. The house then passed to Dr. and Mrs. Pride Jones. Later owners were Bishop Theodore Lyman and Sterling Ruffin. The present owners are Mr. and Mrs. Samuel T. Latta.