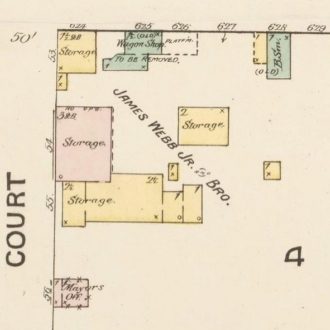 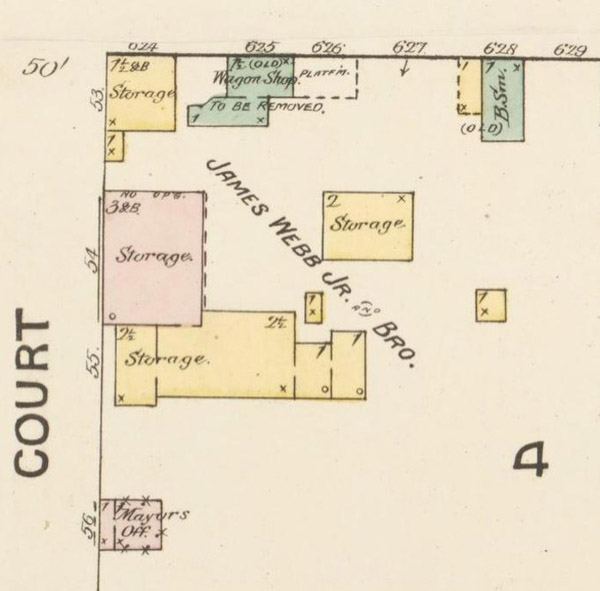 Excerpt from the 1888 Sanborn map 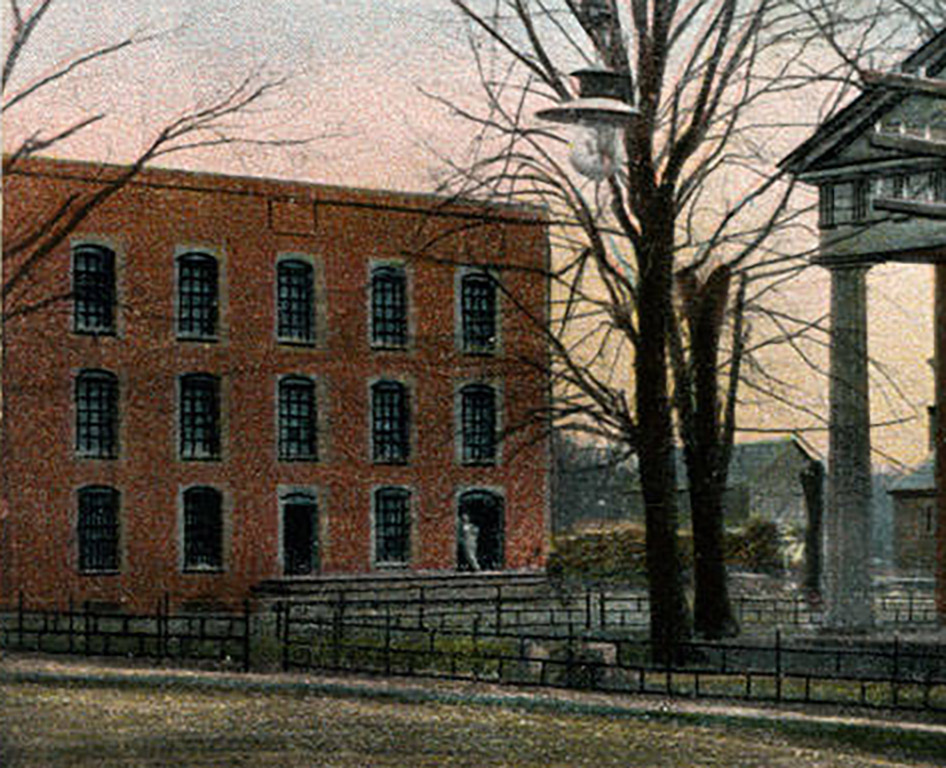 ~1900 (UNC postcard collection.) Old Courthouse is to the right. 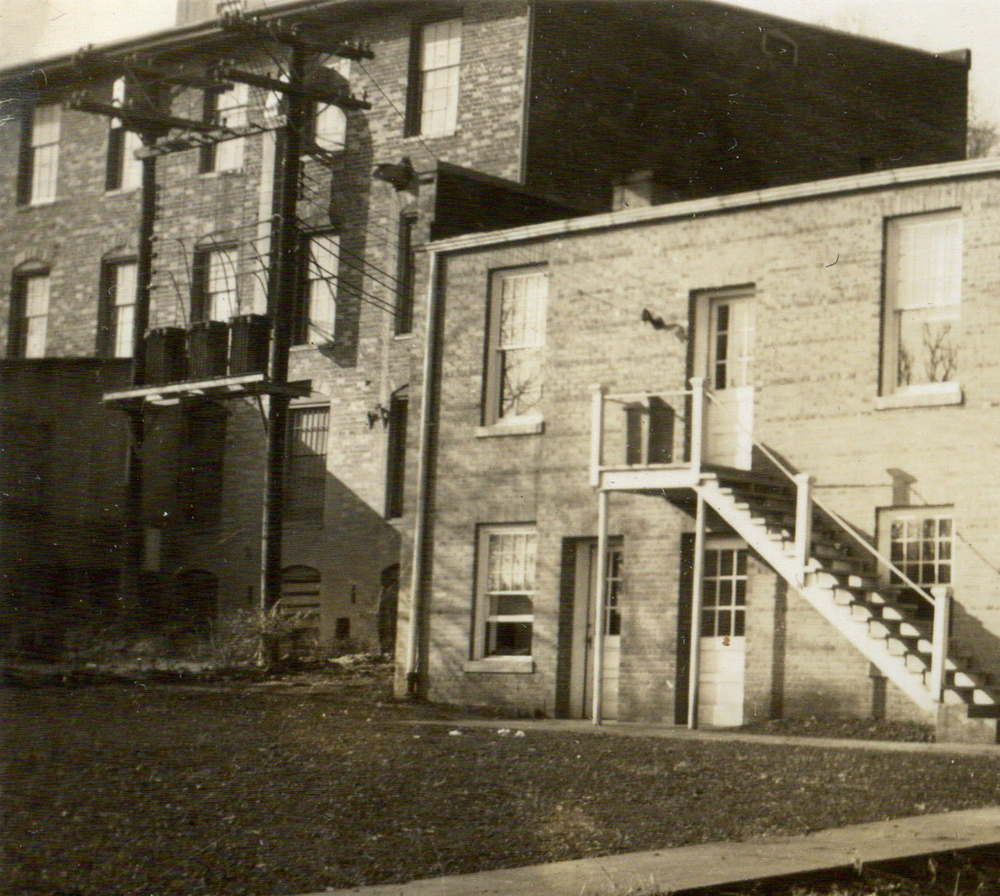 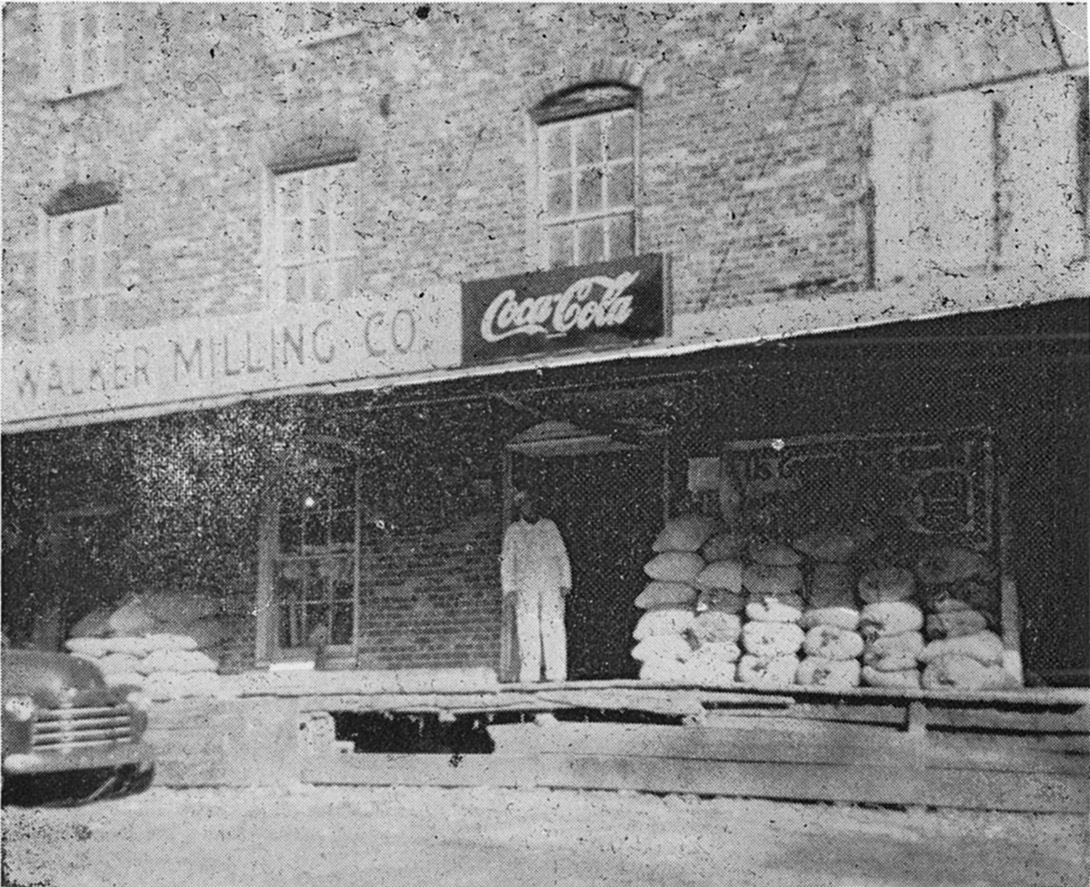 Webb & Company tobacco was started by James Webb, Jr., Joseph C. Webb, and George C. Corbin in 1878. They first operated in a wooden building, located on the southeast corner of King and Court Street (across the street and east of the 1840s courthouse), and in 1880 erected a brick three-story building, measuring 40 feet by 60 feet, connected to and to the north of the original wood building. Webb and Company produced twist and plug tobacco, and in 1881 they produced about 150,000 pounds of tobacco. Their main plug tobacco markets were in North Carolina and other Southern states, selling the brands Superb, Choice Bright, and Choice Red; most of their twist tobacco was sent to Cincinnati, Ohio, and Nashville, Tennessee, under the brands Berkshire and Victory.

By 1900, Webb and Company was out of business, and their tobacco factory was used for storage. A year later, the complex was utilized by the Hillsboro Milling Manufacturing Company. Between 1900 and 1905, the original wood building was torn down. By the 1920s, the brick building was Walker's Flour Mill (a.k.a. Walker Brothers Milling Company and Walker Milling Company).

From History of the Town of Hillsborough:

"Walker's Flour Mill is located across from the courthouse. It is now [early 1960s] owned and operated by Mr. Charlie Walker, Jr. This mill was first known as the Hillsborough Milling Company, It was owned by the Webb family, starting about 1900. Mr. Atlas Williams began work at this mill in 1904. The Walker Brothers bought the mill in 1917 and completely overhauled it.

"Orange County will buy more than $7,500 worth of historic hand-made bricks being removed from a razed building on courthouse square in Hillsboro.

The purchase for purpose of resale was agreed to at the request of spokesmen for Hillsboro historical groups. They asked the county commissioners to halt demolition of the former Walker Milling Co. building and to preserve its exterior and rebuild it as an office structure. Short of this the historical buffs asked that the bricks at least be salvaged.

The commissioners declined to change their plans to level the building site citing a contract with S. O. Cooper of Wilmington, who was at that moment in the process of tearing down the four-story structure. But by split vote decision they agreed, after inspecting the premises, to have the estimated 180,000 bricks salvaged and made available for purchase within a six months period.

The contractor offered the bricks to the county at $45 a thousand, and guaranteed to buy them back if they weren't purchased. Newly elected Board Chairman Harvey Bennett had to cast his first tie-breaking vote in passing the purchase motion proposed by Commissioners Gordon Cleveland and Bill Ray and opposed by Carl Smith and Henry Walker. Historic Hillsborough Commission Chairrman Mrs. A. G. Engstrom told the commissioners the bricks were first used In the old Hillsborough Academy, that later became the Bingham School, and was built around 1845.  The building was later a boarding house, she said. Then the bricks were salvaged for use in the flour mill building that was put up on the courthouse square an estimated 80 years ago. The property was bought by the county last year.

Until the wood trim on the brick structure was removed, historical groups hadn't realized how beaufitful the building was, Mrs. Engstrom said in her appeal. She asked that work be halted while the historical groups studied to see what could be done toward preserving it.

Chairman Bennett noted "We don't have the money to fix up the building now," calling attention to its hazardous condition and the firm contract for its destruction. County administrator Sam Gattis said the contractor planned to knock in the four-brlck-thick walls with an iron ball swung from a crane after he removed the roof and hand-hewn timbers supporting the interior structure." 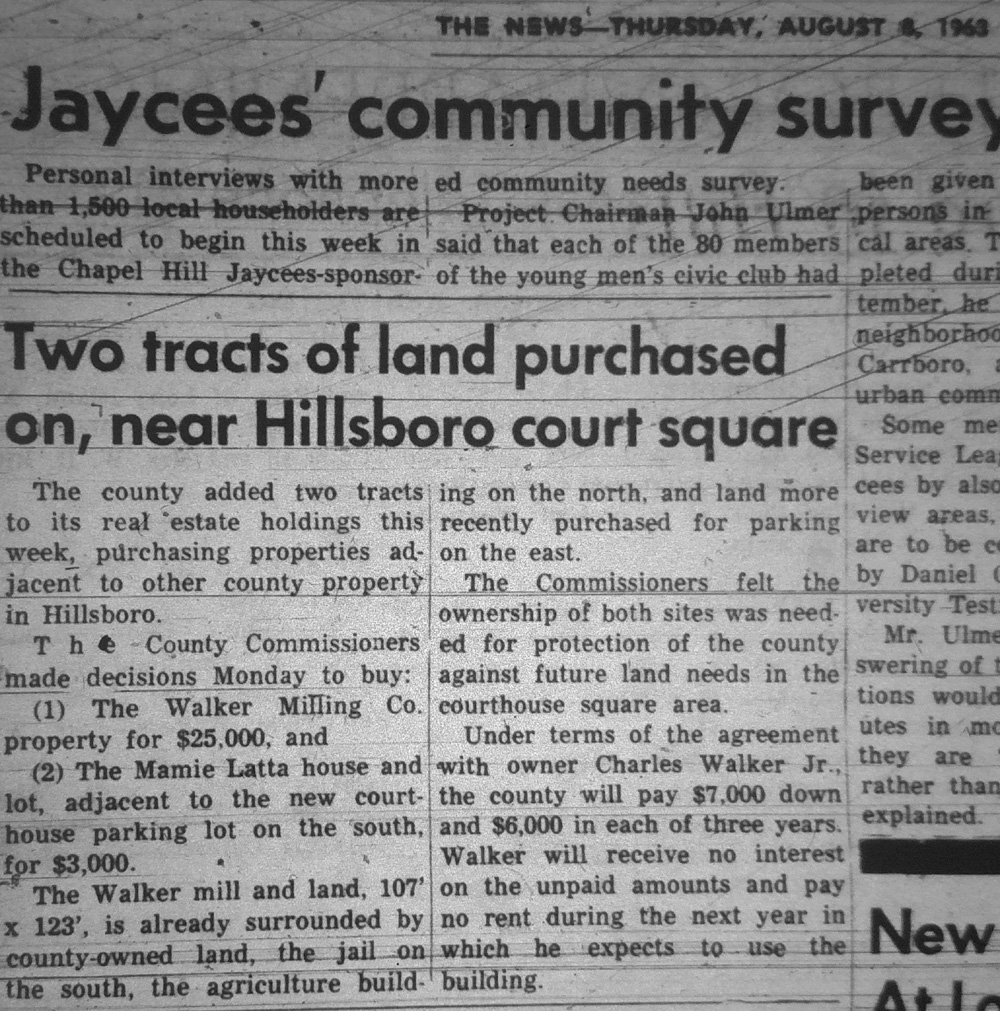