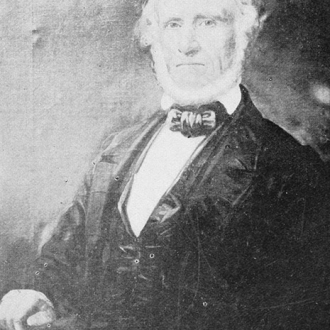 He was educated at the famous Marcus George School, Warrenton, N.C., was a student at the University; left it at the age of 17 and joined the navy; was Midshipman on the Chesapeake when attached by the Leopard, 1807. It was Commodore Barron's flagship; had just started for a cruise in the Mediterranean; was unprepared for action ; was disabled and returned to port.  The question was the right to search for British sailors. He quit the navy and joined the United States Army at Halifax; was appointed First Lieutenant Third Regiment, 3d May, 1808, Pasture Colonel. The regiment reported to Gen. Wilkinson on the Mississippi, where the regiment was decimated by disease and formed into one company. On the 12th August, he was made Adjutant of the regiment under Gen. Wade Hampton, who succeeded Wilkinson. He remained with Hampton until November , 1810, when he resigned to marry. He was a wealthy an successful planter, first on the Roanoke, [and] later on he purchased the "Mt. Gallant" place, in York County, S.C., and a valuable plantation on the Black Warrior, in Alabama, and was the owner of a large number of negroes. From early training he had a military bearing, the suavitas in modo, fortitu in re, was happily blended in his manner and character. Though fitted for service in the affairs of the State, he never sought position, but gave his life to domestic and social virtues.

He served on the Board of Internal Improvement during the administrations of Buron, Iredell, and Owens; was President of the Roanoke Navigation Co., and was for a long time Chairman of the Court of Common Pleas and Quarter Sessions, which, under the old system, had jurisdiction of all matters save capital felonies. Mrs. Jones was distinguished for her pure piety, and in all the relations of wife, mother, and friend was most exemplary. A friend, speaking of her old age, said "Her heart survived all other parts of her worn frame, and was warm and living to the last.""