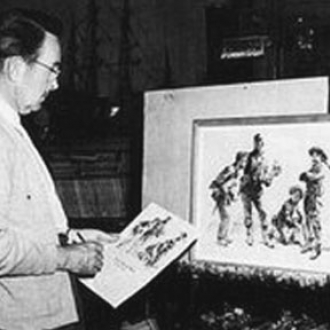 William Meade Prince was born in Roanoke, Virginia, the son of Robert Watson and Alice Wales Meade Prince. When he was five years old, his parents moved to Chapel Hill to live with his grandfather, Dr. William Meade, the Episcopal rector, in his East Rosemary house. Prince lived in Chapel Hill until he was fifteen years old, when his family moved to Birmingham, Alabama.

In 1936 William and his wife, Lillian Hughes (they were married November 24, 1915), moved from Westport, Connecticut, to Chapel Hill, and he became a lecturer in The University of North Carolina's Art Department. In 1943, he served as head of the art department, and during World War II he created drawings and posters for the Committee to Defend America, the U.S. Army Hospital Corps, and the United Service Organizations (USO). Also during WWII Prince illustrated the Sunday comic strip Aladdin Jr. He acted in several plays of the Carolina Playmakers with his wife and played Ananias Dare in the outdoor drama The Lost Colony.

Prince illustrated stories for magazines such as Collier's, The Saturday Evening Post, Red Book, The Woman's Home Companion, and Cosmopolitan. He also produced illustrations for the work of authors such as James Street, Philip Wylie, Kathleen Norris, William Saroyan, and Arnold Bennet. He was noted for his illustrations of the stories of Roark Bradford, and, among other advertising assignments, illustrated an advertising campaign for Dodge cars.
In 1950 Prince wrote and illustrated a book about his experiences growing up in Chapel Hill, The Southern Part of Heaven.
On November 10, 1951 Prince died of a self-inflicted .32 caliber gunshot wound in the studio of his home in the Glenwood development of Chapel Hill. He is buried in the Chapel Hill Cemetery.
Prince was a member of the Chapel Hill Town Planning Board, State Planning Board, Building and Grounds Committee of The University of North Carolina, Virginia Museum of Fine Arts, Southern States Art League, North Carolina Artists Association, Sons of the American Revolution, Society of Illustrators, Artists and Writers Association, Players Club of New York, and Chapel Hill Country Club.
The William Meade Prince and Lillian Hughes Prince Papers are held at UNC.