Submitted by gary on Mon, 07/04/2016 - 9:25pm
A short lived school on the west side of Hillsborough tied to the growth of the Confederate insurrection; while it reopened after the Civil War, it never quite found its footing.

The Hillsborough Military Academy was the idea of Moses A. Curtis (at the time the minister of St. Matthew's Episcopal Church in Hillsborough, and whose son later became a cadet and was killed at the Battle of Bentonville during the Civil War), to ensure that suitable local boys could obtain a decent education, as he felt the opportunity to do so was lacking in the area. In Late July 1858, he, Charles Courtney Tew (an 1846 graduate of South Carolina's military academy The Citadel), and A.S. Galliard searched Hillsborough and its environs for a suitable site for a military academy, which would be the 'Tarheel Citadel.'

They located a 40 acre tract ~1 1/2 miles west of Hillsborough, close to the new North Carolina Railroad line, and obtained it for the school site. They engaged architect John A. Kay of Columbia, South Carolina (who had a hand in designing the South Carolina State House) to design the barracks and the commandant's house, and they would be built by local builders John Berry and Henry Richards.

The academy's neo-Gothic barracks was 3 storeys high, 215 feet long by 45 feet wide, and able to house 125 cadets, instructors, and classrooms.  It was brick with "massive" turrets flanking a central entrance. Large wooden verandas were built along the rear (north side) of the building. It cost $30,000 to build, and was completed in September 1860.

"Col. Tew who has occupied the buildings of the Hillsborough Male Academy, with his flourishing Military School, is about to remove to his own commodious and elegant establishment, thus leaving the Academy vacant."

In March of 1859, Tew's residence, known as "headquarters" or the "Commandant's House" was completed enough for Tew and his family to occupy. Like the barracks building, it was neo-Gothic in style, with turrets and crennelations along the roofline. However, the interior was likely not completed until 1870.

In addition to the commander's house and the barracks, the academy's campus eventually included a mess hall, a social hall, storeroom, doctor's office (the academy's doctor was Edmund Strudwick), and infirmary. The academy's first teachers were A.S. Galliard and Major William H. Gordon (an 1852 graduate of VMI). 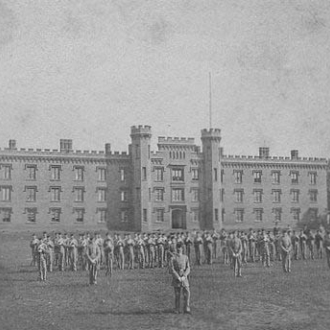 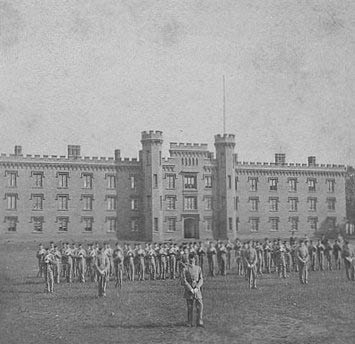 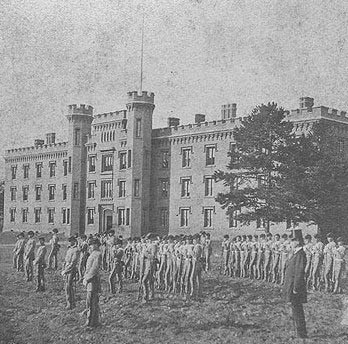 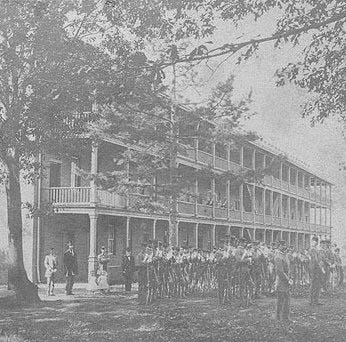 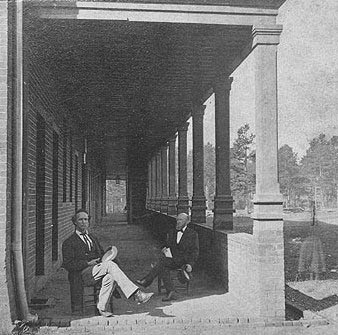 Rendering of the Barracks and Commandant's House, 1867 (North Carolina Collection via UNC; sourced from http://freepages.history.rootsweb.ancestry.com/~orangecountync/places/hm...) 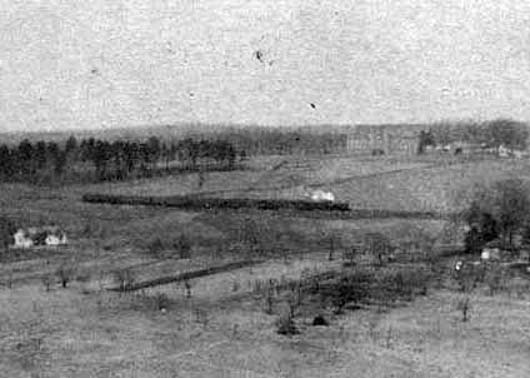 A too-fuzzy and too-small picture taken from Occoneechee Mountain, looking northwest, c. 1910. The train is going by and the barracks building is visible in the background 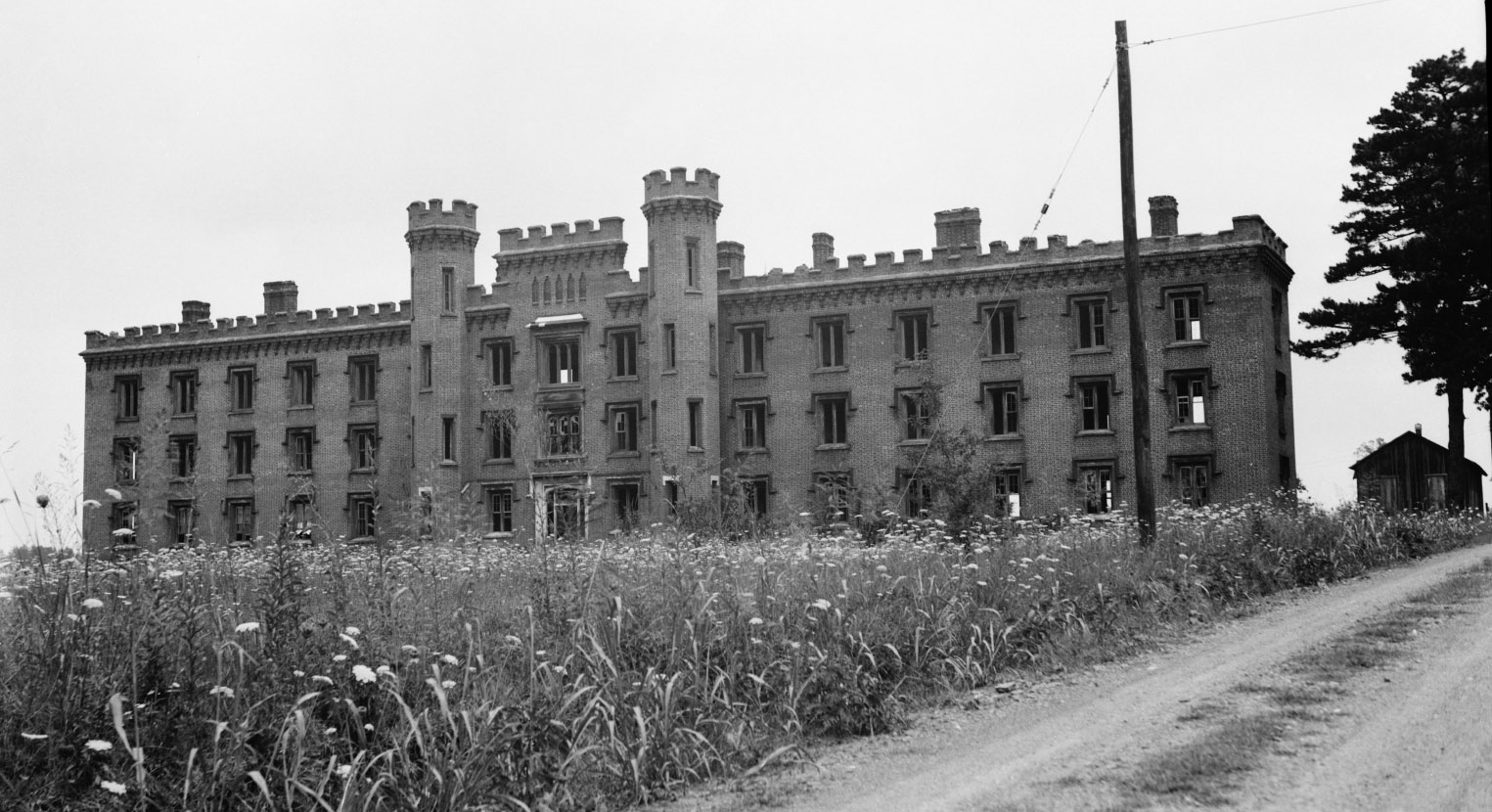 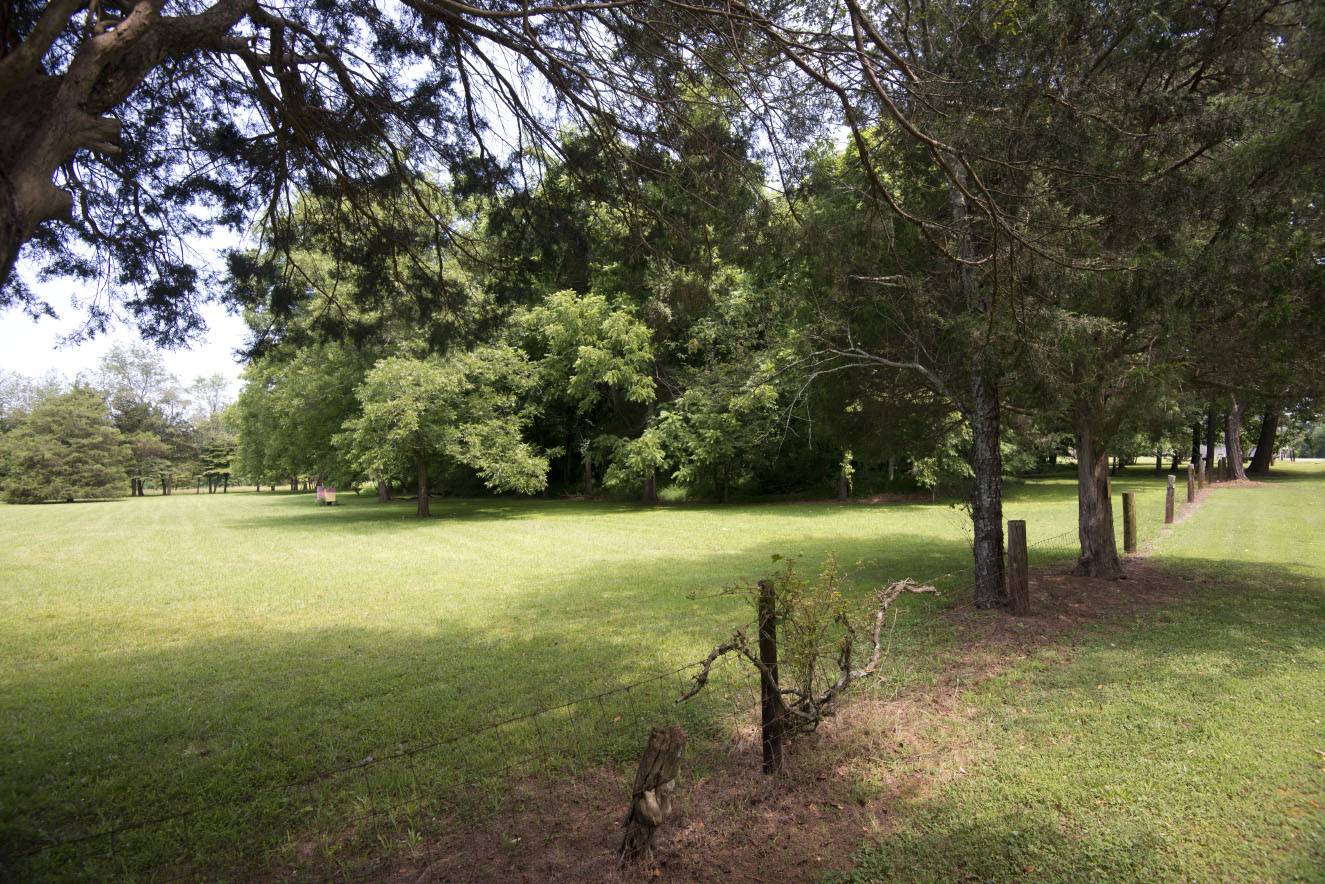 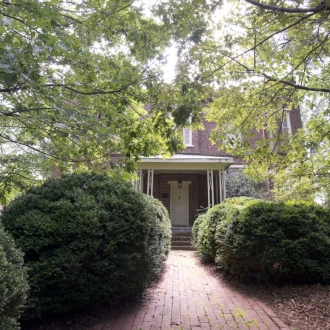 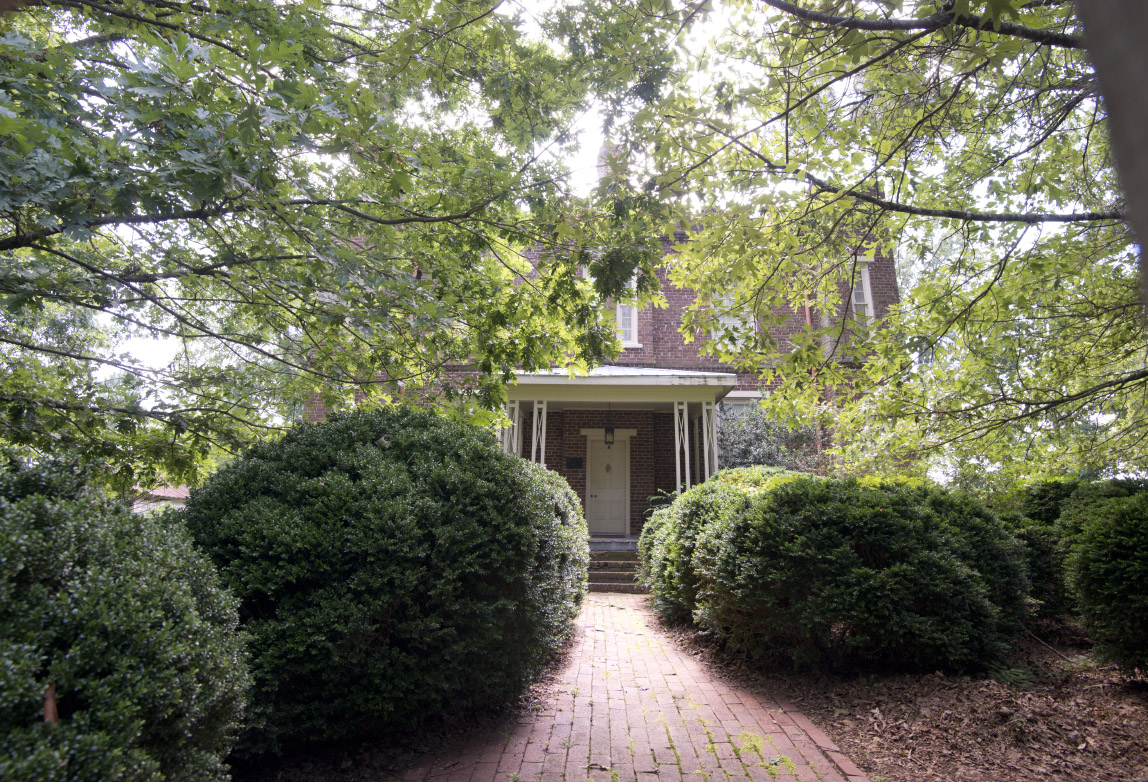 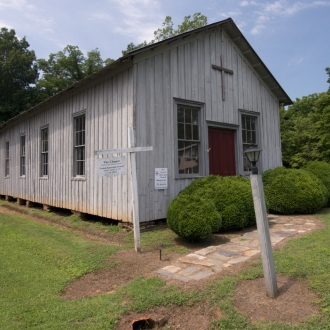 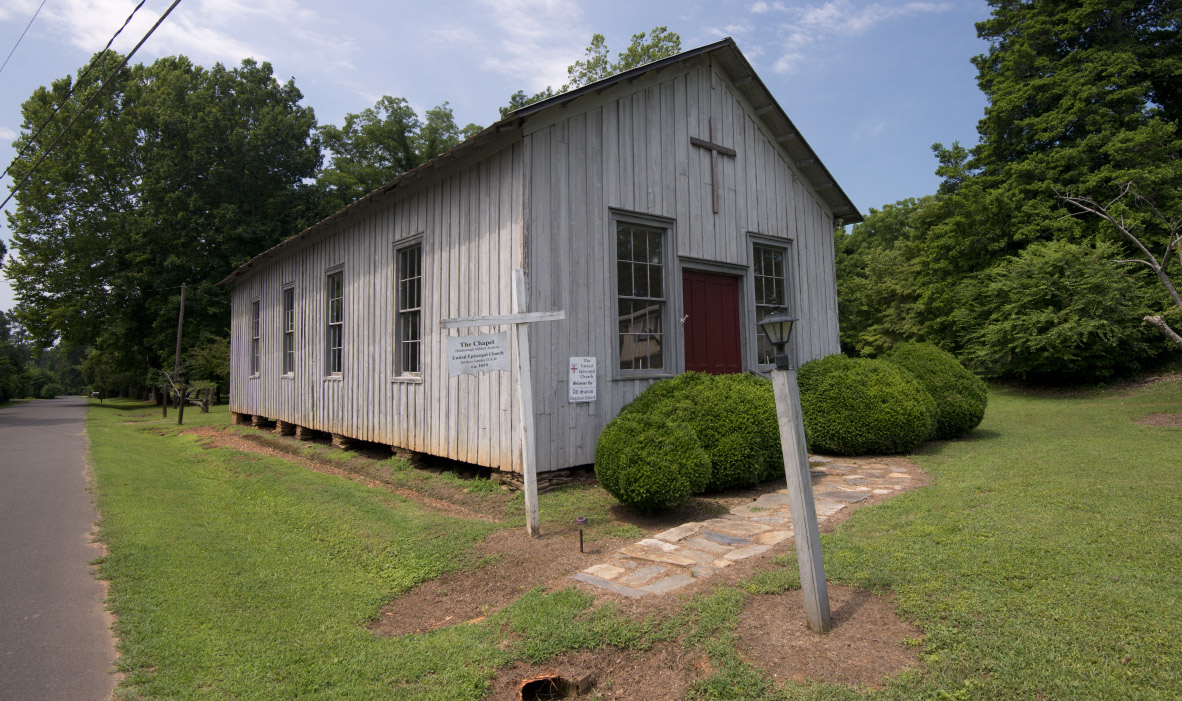 The academy's mission was to "prepare the cadet not only to serve his country in time of crisis, but more importantly, to serve his community as a civilian." The academy provided instruction in scientific and engineering courses, and in military tactics and drill. Entrance requirements included an ability to read, write, and perform "with facility, arithmetical operations involving the four grand rules." Its curriculum was modeled after West Point's, the Virginia Military Institute's (VMI), and the Citadel's.

The academic year ran from January to November, and cost the cadet's family $315, payable in three installments. The fee provided each cadet with uniform items, room and board, instruction, textbooks, and medical care. By January 1860, 107 cadets from eight Southern states had enrolled. The academy was initially privately funded, but in 1861 became chartered by the North Carolina State legislature, designating it a public institution (the charter didn't, however, provide free education for students who were unable to pay).

Letters from students tell of their enjoyment in fraternizing with the girls at the Nash and Kollock school in town.

The school operated only for a brief period before the outbreak of the Civil War in April of 1861. Tew was one of the few experienced military commanders available to North Carolina, and was quickly pressed into service by the Confederacy. He sold a pair of brass cannons recently purchased for the Academy to the state of North Carolina and prepared a list of armaments necessary to defend the state. Tew himself was assigned to Fort Macon in May 1861 and the Academy became a "recruitment center." He left the academy on May 20, 1861, assigned to command the 2nd North Carolina volunteers.

John M. Richardson became acting superintendent of the academy. Given the number of instructors participating in the war, however, it became a struggle to keep the school operational. Late in 1861, Richardson was forced to send students home for the remainder of the term. The facility became an ordnance manufacturing and storage facility, as well as a camp of instruction and recruiting area for the military.

In March of 1862, the academy was reopened and was commanded by Major William Gordon a VMI graduate. He pledged that "other Competent Officers have also been secured, and no further interruption of dutes need be apprehended."

However, Colonel Tew, who had been placed in command of the 2nd NC after the death of George Anderson, was killed at the Battle of Sharpsburg/Antietam in September 1862 by a single shot to the head.

Those running the academy learned of his death on November 5, 1862; the Hillsborough Recorder ran a front page eulogy composed by a meeting of Hillsborough citizens at the courthouse - included were Paul Cameron, Rev. Curtis, Dr. Pride Jones, M.E. Manly, H.K. Nash, and Thomas B. HIll. (Both Curtis and Manly would lose a son in the war, both of whom were HMA cadets.)

Gordon attempted to keep the school running, but potential cadets were more interested in participating in the war than in being students at a military academy. It continued to limp along somewhat gamely during the war, supplying officers and enlisted men for the Confederate military.

In May of 1865, a few weeks after the Bennett Place surrender, students were dismissed and Major Gordon as well, replaced temporarily by a Major White, formerly of the Citadel, who was unable to keep things running and left as well.

In 1866, the Academy reopened with General Raleigh Edward Colston at the helm. The school was renamed the North Carolina Polytechnic and Military Institute. However, in the wake of the Civil War, funding was scarce, and the Reconstruction government was understandably hostile to the school. Colston attempted to reduce staff and raise fees to $365 a year. The school languished, however, in no small part due to the loss of an animating military fervor and purpose that had been present prior to and during the war.

Colston resigned and left for Wilmington (where he would start another school). Mrs. Tew, widow of the Colonel, moved into the vacant upper floors of the Barracks and closed the school. In 1870, Mrs. Tew died and the school was auctioned; Paul Cameron bought the entire campus for $5000. He either finished or made extensive improvements to the Commandant's House, in part to attract a new superintendent for the school. He began to woo Col. James Hunter Horner of Oxford, who ran the Horner and Graves in that city, to move his school to the HMA campus. Cameron wrote about the campus

"all [buildings] need some repairs and it is my purpose to put it all in good condition - at the very earliest day and offer it to the Military School - I shall seek only a reasonable rent - I desire to make it a success - in the hands of a man of high character."